Adani’s proposed Carmichael coal mine is not economically viable, say many economic commentators. Similarly, the Indian power plant for which the coal is destined has been described as a ‘stranded asset’ even while under construction.

You don’t have to have a PhD in economics to see that exporting coal from central Queensland across thousands of kilometres of land and ocean to a country that produces large quantities of its own coal is, at the very least, economically questionable. So how is it that Gautam Adani can portray his Carmichael mine as a going concern? Why is he prepared to sink billions into one of the world’s most controversial developments? This article briefly looks at Adani’s business plan for his Carmichael coal and the profusion of political favours necessary for it to stack up. 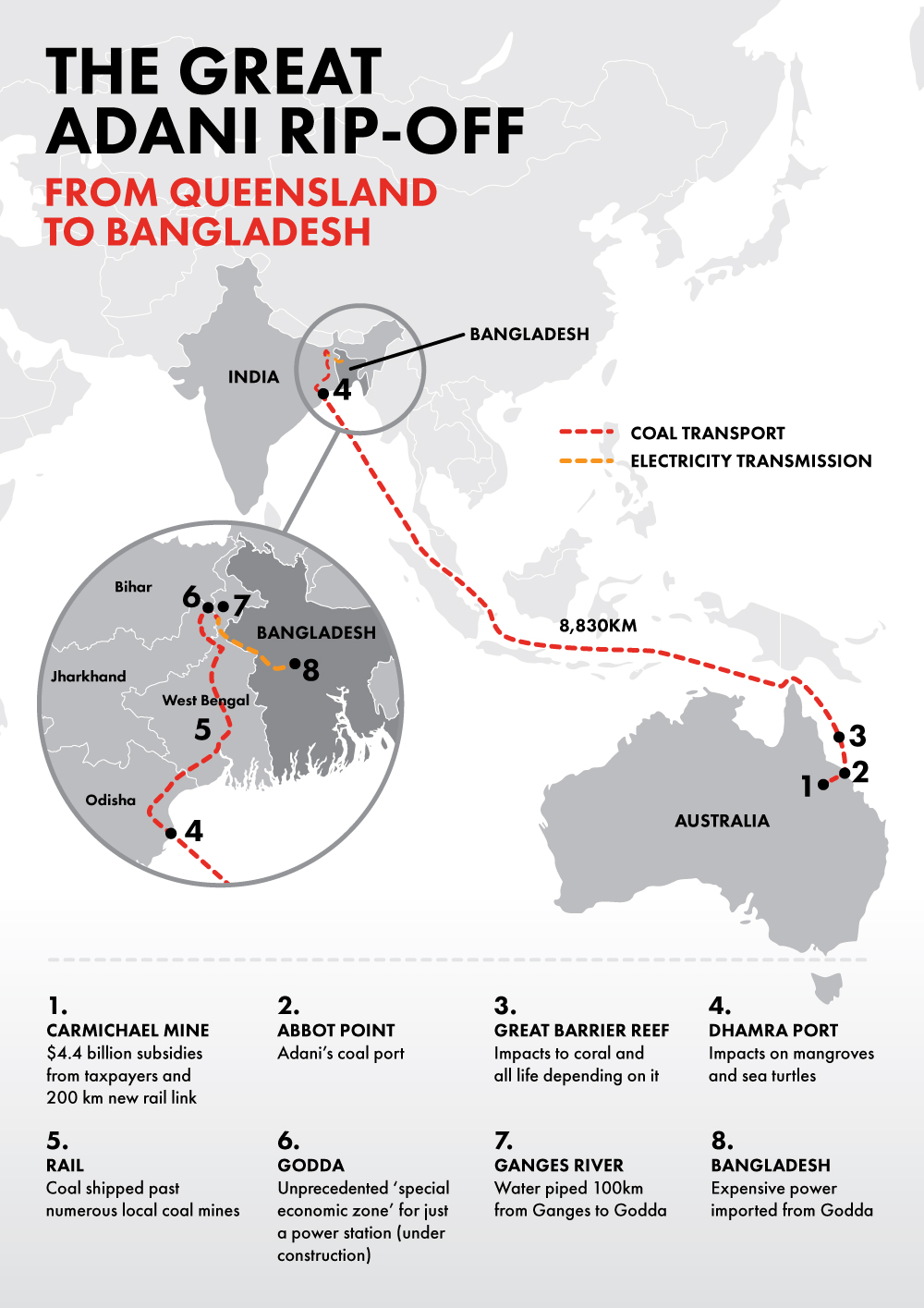 First, let’s look at what the project entails. A large coal mine has to be established in central Queensland. Once extracted, the coal must be transported over 300 km to the coast.  To do this, Adani must construct a brand new rail link for 200 km to connect with the existing network. The coal would then be exported from Adani’s port at Abbot Point 8800 km across the sea to Adani’s Dhamra port in north-east India. Trains would then take the coal 695 km past several local coal mines to Adani’s power plant at Godda, currently under construction. The power subsequently produced would then be transmitted across the border to Bangladesh for sale to consumers at a price in excess of the going rate in India.

The Adani group has therefore managed to cobble together a scheme where it sells power, generated from Carmichael coal, at an inflated price to a captive market in Bangladesh. However, this business plan depends on a chain of sweetheart deals. If any one of them fails, the whole arrangement could collapse like a house of cards.

The Australian component of the plan has already come under fire for excessive generosity to Adani by Australian governments. According to the Institute for Energy Economics and Financial Analysis, Australian taxpayers will provide subsidies to the Carmichael mine in the following ways: 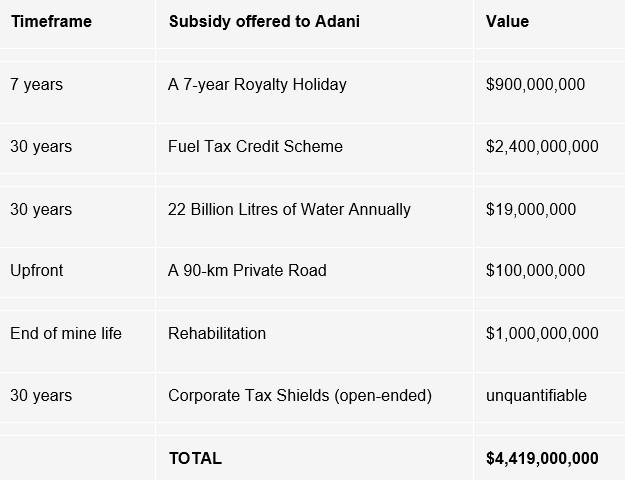 The simple message is that Adani’s Carmichael coal mine can go ahead only with billions of dollars worth of taxpayer subsidies provided by Australian taxpayers.

The Indian component of Adani’s Carmichael plan has come under similar scrutiny and criticism. The concessions extracted from various levels of government include:

The granting of a Special Economic Zone (SEZ) to the area covering the Godda power plant, allowing Adani to enjoy major tax incentives and exemptions from many costs that would otherwise apply in the realm of customs and contracting. Application of an SEZ to a single power plant was unprecedented and required special alteration of guidelines by the Modi Government, effectively tailor-making the rules to suit Adani’s purposes.

It has been reported that the process of gaining an SEZ was preceded by a ‘ruthless process of forceful acquisition of land and a crackdown on protesting tribals’. The acquisition by the government on behalf of the company occurred on the legal grounds that the power station would serve a ‘public purpose’. However, both locals and experts regarded this claim as spurious when it was realised that the power generated would be exported to Bangladesh rather than consumed locally; they said procedural irregularities and standover tactics had been employed to enable land seizures to occur.

The state of Jharkand assisted Adani’s efforts to acquire land and build the power station in the belief that it would receive 25% of the power generated. But it has been reported that, in a sleight of hand, Adani will export 100% of the power generated at Godda to Bangladesh while providing Jharkand’s share from another as yet undisclosed source, potentially at greater cost.

Adani has also sought a loan from a government-owned finance corporation whose purpose is to facilitate the provision of electricity to India’s rural villages. The use of such a public authority and its funds to build a plant whose power would be exported to a completely different country has perplexed observers and been reported in the New York Times. The same sources report that Adani has also sought finance from another government finance authority.

After gaining approval for the project, Adani altered its designated source of water from a local river to the Ganges. The switch was highly controversial and involves constructing a 100-km pipeline from India’s most famous and holy river to the power plant, requiring further acquisition of land for the pipeline’s route. Coal-fired power stations use huge volumes of water to wash coal, to make steam and to treat waste.

Making all these things happen has involved emotional and sometimes violent confrontations with villagers resisting eviction from their ancestral lands and loss of livelihoods.

Adani’s plan to build a plant to export power generated from Australian coal has required strenuous deal-making, huge public subsidies in the form of tax revenues foregone, fiddling with regulations, altering the project’s parameters after the fact, draconian means of land-acquisition, and the displacement of local people. It has become an infamous case of crony capitalism under scrutiny by media across the globe. 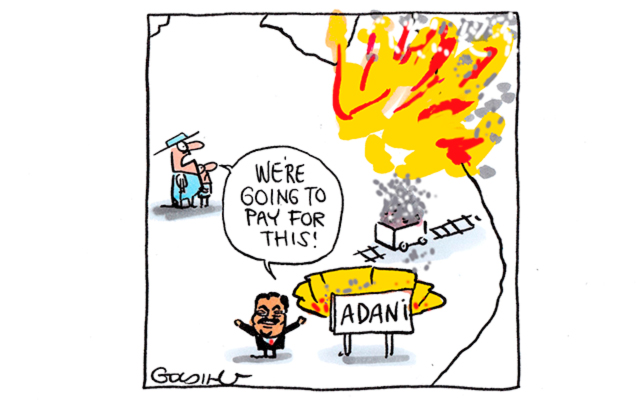 Recent elections have left at least one part of the above chain looking very fragile, with a newly-elected government in Jharkand potentially reviewing its support for the Godda power station. Setbacks in other fields, such as the financial sector or through the courts, could mortally wound the entire project.