Call for government to take over Adani's Mundra port in wake of seizures of drugs, radioactive materials

Geoff Law Nov 26, 2021
A massive drug seizure and the interception of radioactive materials at Adani's Mundra port have prompted a call for a government takeover. Image National Geographic Channel

Following seizures of heroin and radioactive materials at the Adani Group’s Mundra port, a senior journalist has called for a government takeover of the port.

According to an Adani Ports media release:

‘On 18 Nov 2021, a joint Customs and DRI team seized several containers at Mundra port from a foreign vessel on concerns that they contained undeclared hazardous cargo. While the cargo was listed as Non-Hazardous, the seized containers had Hazard Class 7 markings (which indicate radioactive substances). Although the containers were not destined for Mundra Port or any other port in India but were en route from Karachi in Pakistan to Shanghai in China, the government authorities had them offloaded at Mundra Port for further inspection.’

This followed the seizure in September of 3000 kg of heroin, also at Mundra port. According to Adani Ports:

‘On 16 Sep 2021, a joint operation by the DRI and Customs unearthed a large cache of contraband heroin from two containers from Afghanistan that had arrived at the Mundra International Container Terminal (MICT), Mundra Port. We thank and congratulate the DRI & Customs teams for seizing the illegal drugs and apprehending the accused.’

Following the drug haul, said to be worth $2.7 billion (yes, billion), Adani Ports said it would no longer accept shipments at Mundra from the countries of Iran, Afghanistan or Pakistan (reported last month by AdaniWatch).

But the interception by officials of radioactive materials arriving in Mundra from Karachi in Pakistan (and bound for China) has prompted a call for the port to be taken over by the government. 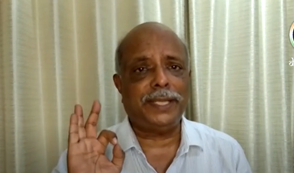 S. Balakrishnan is a Mumbai-based senior journalist who used to be employed with the ‘Times of India,’ the most widely circulated English daily newspaper in the country and reported regularly on crime. Following the November seizure of radioactive materials at Mundra, he made a passionate appeal to the government on video.

‘Gautam Adani owes an explanation to the nation,’ he said. ‘The Government also needs to get its act together.’

‘It’s high time we told (Gautam Adani) that he’s not operating Mundra port any more. In the larger national interest, Mundra port should be taken over by the government.’