Community groups, financial experts and lawyers from three different countries have collaborated to stop Adani’s coal-fired power station at Godda from being completed. Godda is in eastern India, about 400 km north of Kolkata. The power station that Adani is constructing there is the lynchpin in Adani’s plan to ship Australian coal to India and sell the power to Bangladesh.

About 70 people participated in a webinar on 10 August 2020, swapping stories and insights about the environmental, social and economic damage associated with the Godda plant.

AdaniWatch coordinator, Geoff Law, who addressed the webinar, said that the campaign against the Godda power station is building international momentum.

‘It’s great to see dedicated people in three countries getting together to tackle the destructive plans of the Adani Group,’ Mr Law said. ‘The Godda power plant, if completed, will cause even more suffering amongst the local people and degrade India’s holy Ganges River.’ 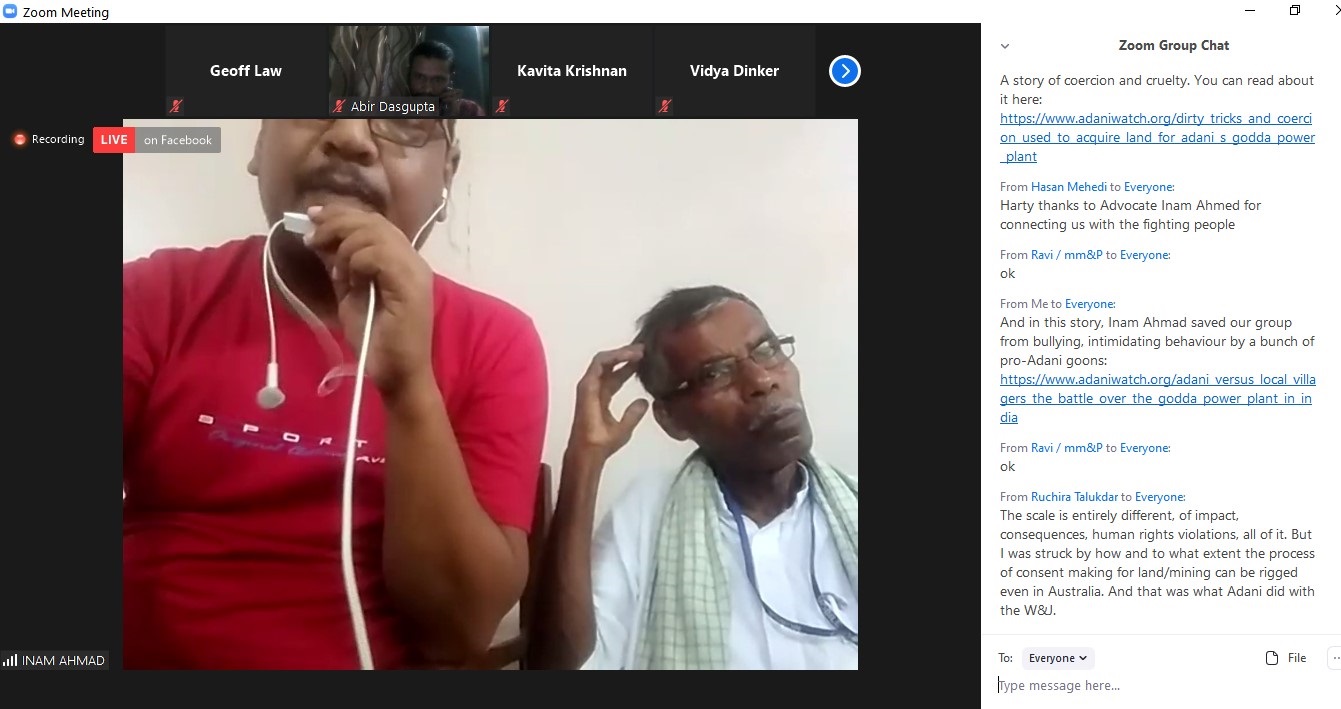 Dispossessed indigenous farmers told how their land was seized on Adani’s behalf by the Jharkhand government’s use of coercion and underhand tactics (at about 34:00, 44:00). Their local supplies of water for drinking, cooking and farming have been drastically degraded.

Environmentalists described how the Godda power plant’s thirst for water will deplete and degrade India’s sacred Ganges River (at about 2:26:00 and 2:40:00).

Analysts in the field of energy and finance described how Adani’s convoluted plan to ship Australian coal 10,000 km to an Indian power plant can be made possible only by passing on the costs to Bangladeshi energy consumers. The Bangladeshi electricity grid is already suffering from over-capacity, with 44% of its power capacity idle, and over a billion dollars currently being paid to energy companies each year for power that is not used (at about 1:12:00). The import of power from Adani’s Godda power plant will exacerbate this burden on the financial system of Bangladesh, preventing investment in more viable economic enterprises. Meanwhile, cheap solar power is drastically undercutting the price negotiated by Adani with Bangladesh for power from Godda (at about 1:48:00).

Participants in the webinar also heard from determined citizens and lawyers who are taking on Adani in the courts. Indigenous (Adivasi) farmers are challenging Adani’s land grab at Godda in the Jharkhand High Court (at about 50:00 and 2:22:00). The Environics Trust is tackling the environmental approval for Godda in the National Green Tribunal, India’s equivalent of an EPA. Two local Members of Parliament were scathing of the role of governments in locking in sweetheart deals that benefit the Adani Group at the expense of the people (from about 1:26:00). 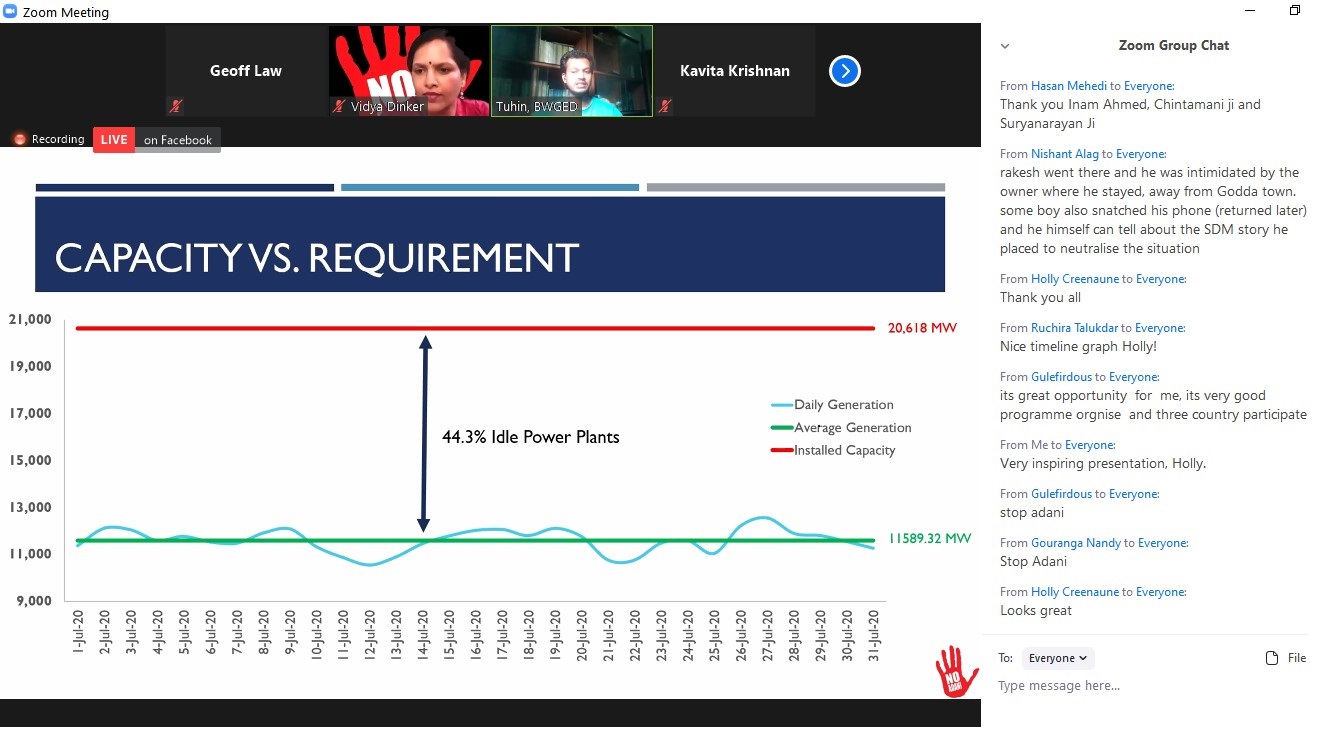 The doyen of India’s investigative journalists, Paranjoy Guha Thakurta, told of the ‘meteoric rise’ of the group’s founder, Gautam Adani, from a trader in plastics and jewellery to one of India’s richest men, with major interests in energy, ports, airports, other logistics, coal mining, real estate, defence equipment and palm oil (at about 12:00). The close association of Gautam Adani and Indian Prime Minister Narendra Modi has become notorious. The association goes back to Modi’s period as Chief Minister of the Indian state of Gujarat, Adani’s home state.

Mr Law addressed the webinar about the work of AdaniWatch at about 2:40:00.

The webinar was organised by the Bangladesh Working Group on External Debt, together with Growthwatch, India Social Action Forum, All India Progressive Women’s Association, and Mines Minerals and People. It ran from 7.30 pm to 11 pm Australian Eastern Time and can be watched on Facebook: 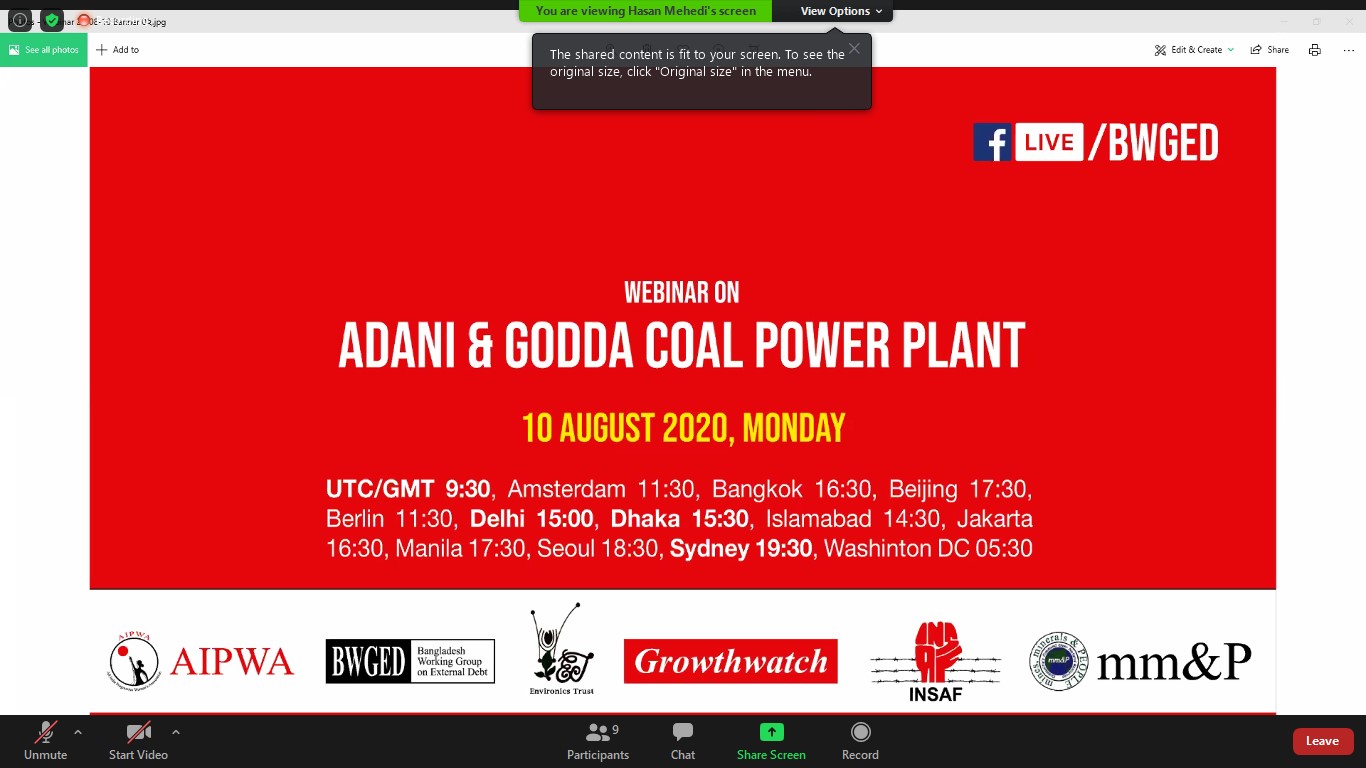