India's tribal Hasdeo people run the gauntlet of pro-Adani goons, slippery politicians, and the green light for a new Adani coal mine

Faced with Adani coal mines that are destroying their forests, ancestral lands, livelihoods and way of life, the indigenous people of India's Hasdeo forests have taken their case to the political leaders of their state. To speak to the chief minister and governor, they trekked over 300 kilometres. On the way, they faced down aggression from pro-Adani 'goons'. Having finally been granted the meetings they sought, however, these brave villagers then had to contend with the slippery double-speak of their elected representatives – as well as the go-ahead for a new Adani coal mine that violated earlier assurances.

On the 2 October 2021, Gandhi’s birthday, the Adivasi (indigenous) people of Hasdeo Aranya, who have been fighting against coal mining for over a decade, organised a rally to uphold their constitutional rights and prevent further destruction of their lands.

The Adivasi people, who gathered for the rally under Gandhi's ethos of ‘humanity, brotherhood, non-violence and peace’, were celebrated by Prime Minister Narendra Modi who tweeted – ‘In the hearts of great men, like Bapu [Mahatma Gandhi] and Lal Bahadur Shastri, were India’s villages. I am happy that today, millions of villagers all across the country, through their village assemblies, are having dialogues over their water and lives.’ But how different were the lived realities on the ground?

Soon after people began to arrive, the nature of the gathering changed from a peaceful Adivasi rally to a confrontation with pro-coal hecklers who, visibly intoxicated, took over the space. Some of the Adivasi alleged that these vocal opponents of the protest had been backed by the Adani Group. 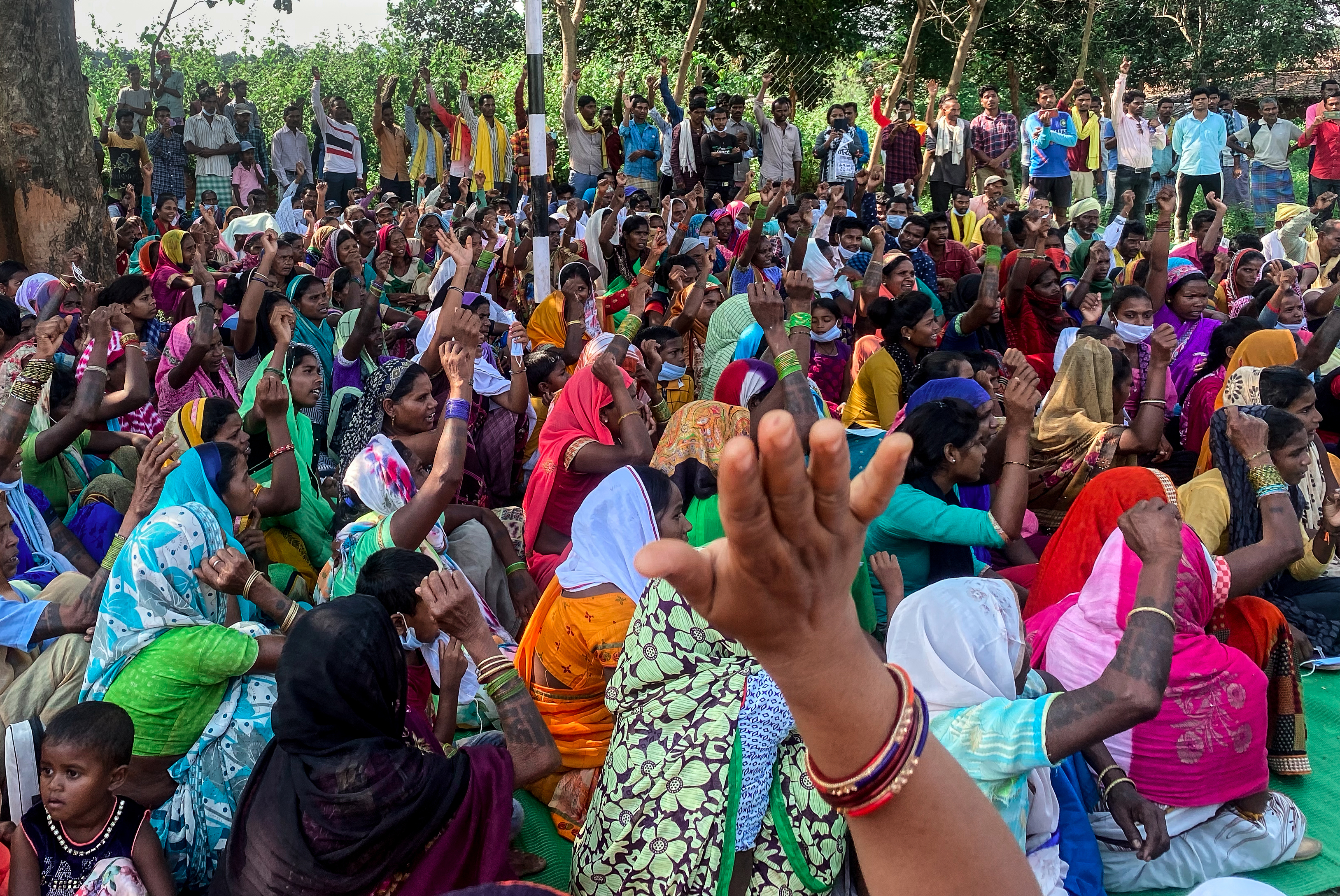 ‘The meeting started three hours late, after Adani’s supporters sobered up from the alcohol that was provided to them,’ revealed Munneshwar Singh Porte, a Gond Adivasi and resident of Fatehpur village where the gathering took place.

The road leading to the venue, which was initially barricaded by the pro-mining people, was eventually cleared and more people arrived, including the police. However, an altercation started even before a dialogue between the two sides could be possible. As witnessed by the authors, the pro-coal group began harassing Alok Shukla (Convenor of the Chhattisgarh Bachao Andolan), preying on the fact that he was ‘an outsider’ and not an Adivasi, and that ‘the matter of the coal mining was of the villager’s concern only.’

Police who were present at the scene reinforced the accusations of the pro-mining group, saying that, since Alok was an outsider, ‘he should not be speaking’, to which Shukla replied that ‘as an Indian citizen [he] had the right, under the constitution, to work anywhere, to protest anywhere, and to move around freely.’ The police, who had previously called on the anti-mining Adivasi ‘not to cause trouble’ retreated from the scene, turning a blind eye to the fact that the pro-mining group freely and vociferously continued to harass Alok Shukla and the Adivasi leaders. 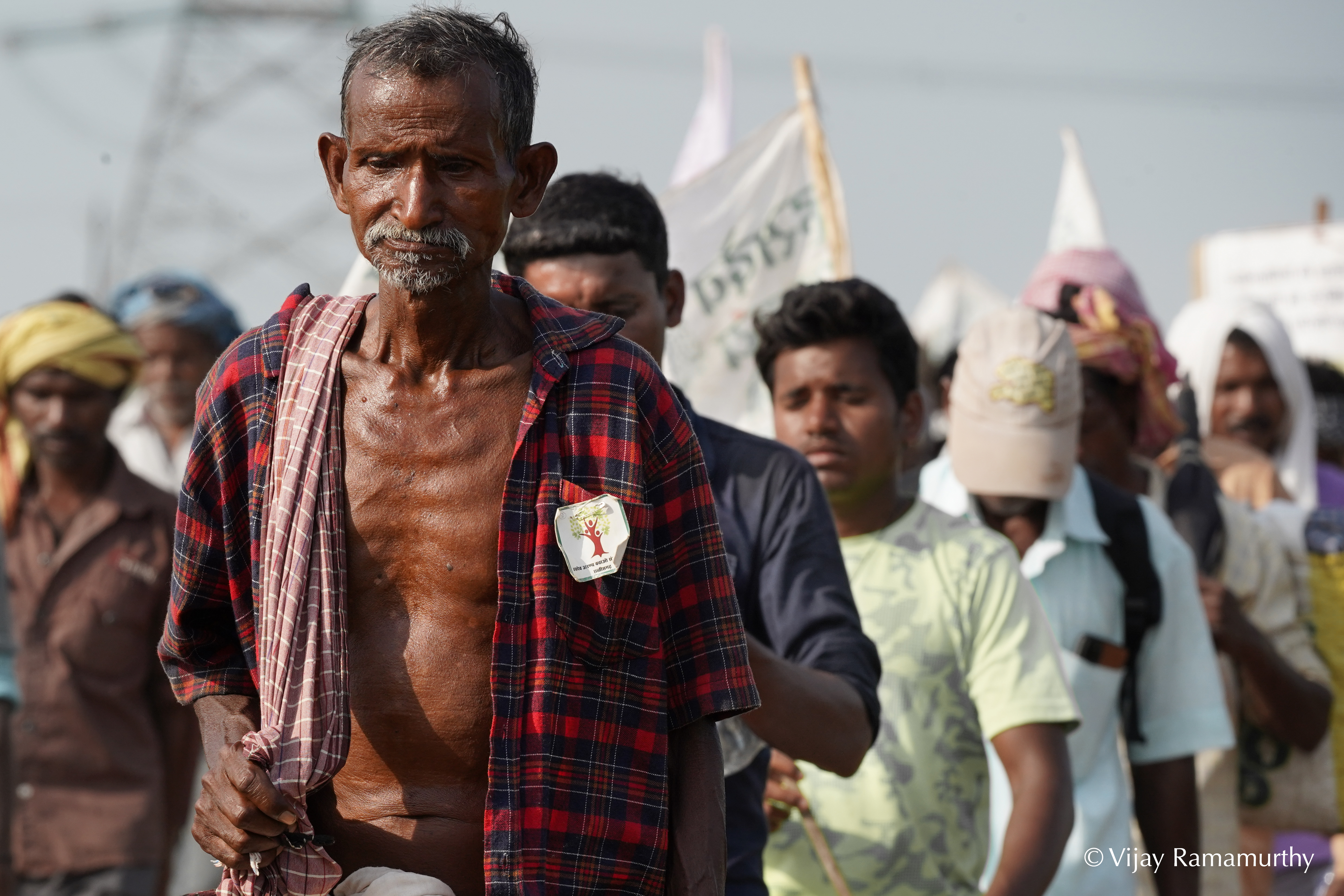 Familiar with this strategy of disruption — where the pro-mining group attempts to incite negative reactions from the Adivasi in a manner that could legitimise their arrest — the Adivasi people followed Gandhi’s historical advice and peacefully ‘turned the other cheek’. The Adivasi resistance movement forfeited their right to free assembly and agreed to cancel the village assembly (gram sabha) to avoid altercations for the time being.

Two days later, the Adivasi people of Hasdeo gathered in the same village, Fatehpur, to begin their 300-km march to Raipur. This gathering was disrupted by the same vociferous supporters of Adani’s coal-mining agenda, who this time formed a human barricade to prevent the people from starting their journey.

‘The police were there to ensure that the march was a failure. They were looking to register official complaints against the Adivasis who stood up against mining, therefore preventing them from exercising their rights,’ remarked Bipasha Paul, a member of Hasdeo Aranya Bachao Sangharsh Samiti (HABSS), or Committee for the Struggle to Save the Hasdeo Forest.

Unaided by the police, the protesters were forced to gather at Madanpur, a village which falls under a different district, simply to be able to exercise their right to protest. Among the 200 people that gathered for the padyatra were several Adivasi youth, who had braved intimidations days before the march.

‘They were threatened by Adani’s goons. They told the boys that if they joined the march they would be arrested,’ revealed Shakuntala Toppo.

Having endured a scorching sun for 10 days as they covered over 300 km on foot, the Adivasi people of Hasdeo arrived in the state capital of Raipur on 13 October, where they hoped to meet with the Chief Minister and the Governor of Chhattisgarh. While the Governor, Anusuiya Uikey, had invited the Adivasi for a meeting the next day, they were yet to receive communication from the Chief Minister's residence. Meanwhile, the Health Minister of Chhattisgarh, T.S. Singh Deo, visited the marchers on 13 October to listen to their concerns. 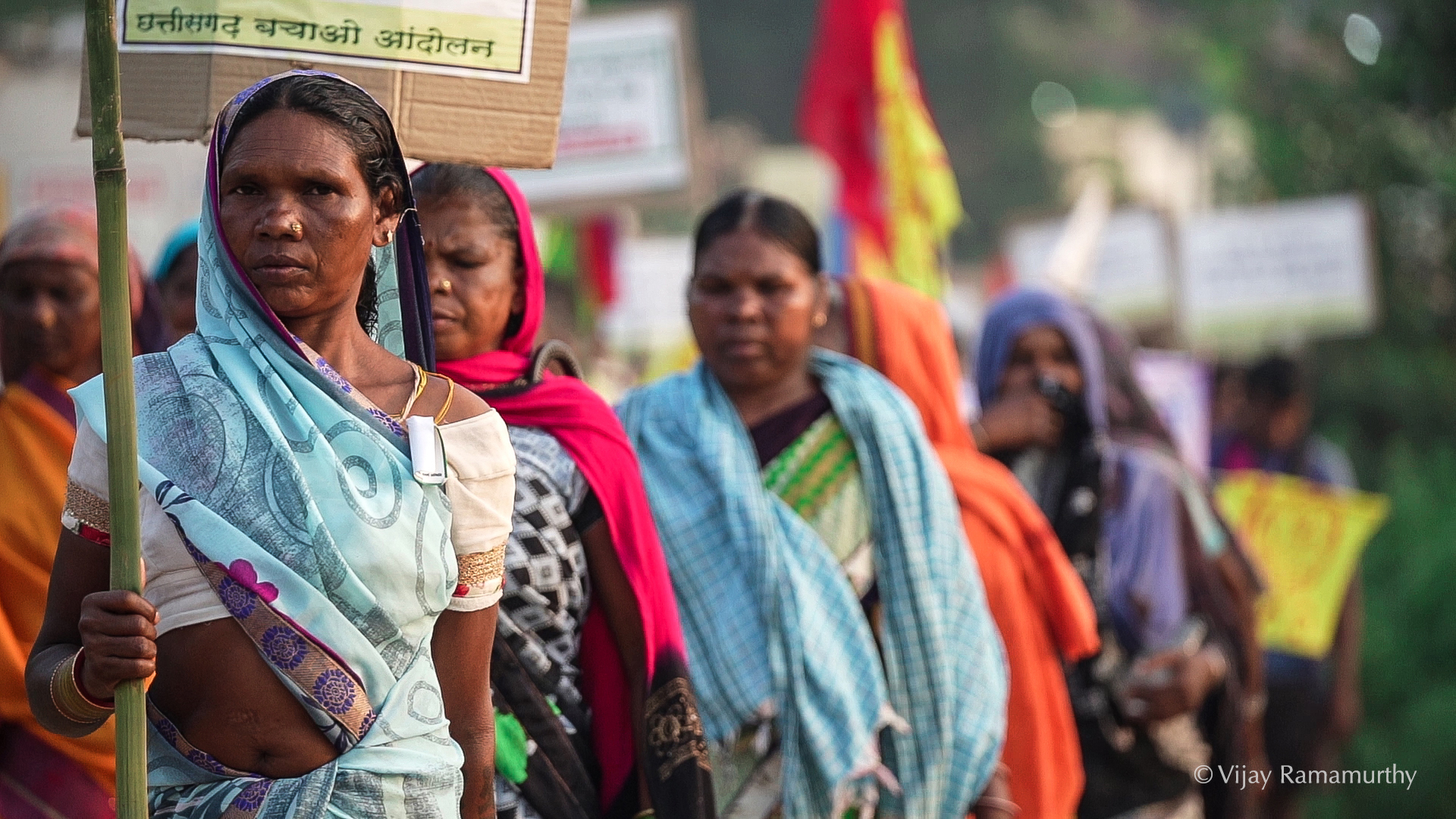 In the meeting, Ummeshwar Singh Armo, one of the leaders of HABSS and the Sarpanch (elected leader) of the Paturiyadand Panchayat, re-iterated the demands of the Adivasi people: ‘There should be no mining in the Hasdeo region. The No-Go Zone status should be re-enforced and the permissions for mining that have been obtained through consent under duress must be cancelled.’

Singh Deo, who is also the titular monarch of Surguja district, replied to the Adivasis’ concerns by referring to the popular Hindu epic Ramayana, ‘The No-Go Zone should be a lakshmanrekha (a line that should not be crossed) and the person who crosses that line is Ravana (the evil King in the epic).’

He expressed his support for the people saying that he ‘would always be seen standing with them and their rights.’ However, Singh Deo went on to add, ‘you have to remain united, because if you come to me with opposing views, I will not be able to stand up for you.’

But can Adivasi people remain united when a powerful corporation like Adani is invested in dividing the communities?

Majhi Ram Porte, a resident of Hariharpur village which is threatened by the Parsa mine, exclaimed ‘My own brothers have sold off the land of our ancestors and have taken compensation. Now my own land stands alone in the middle while Adani builds his mine around it.’ 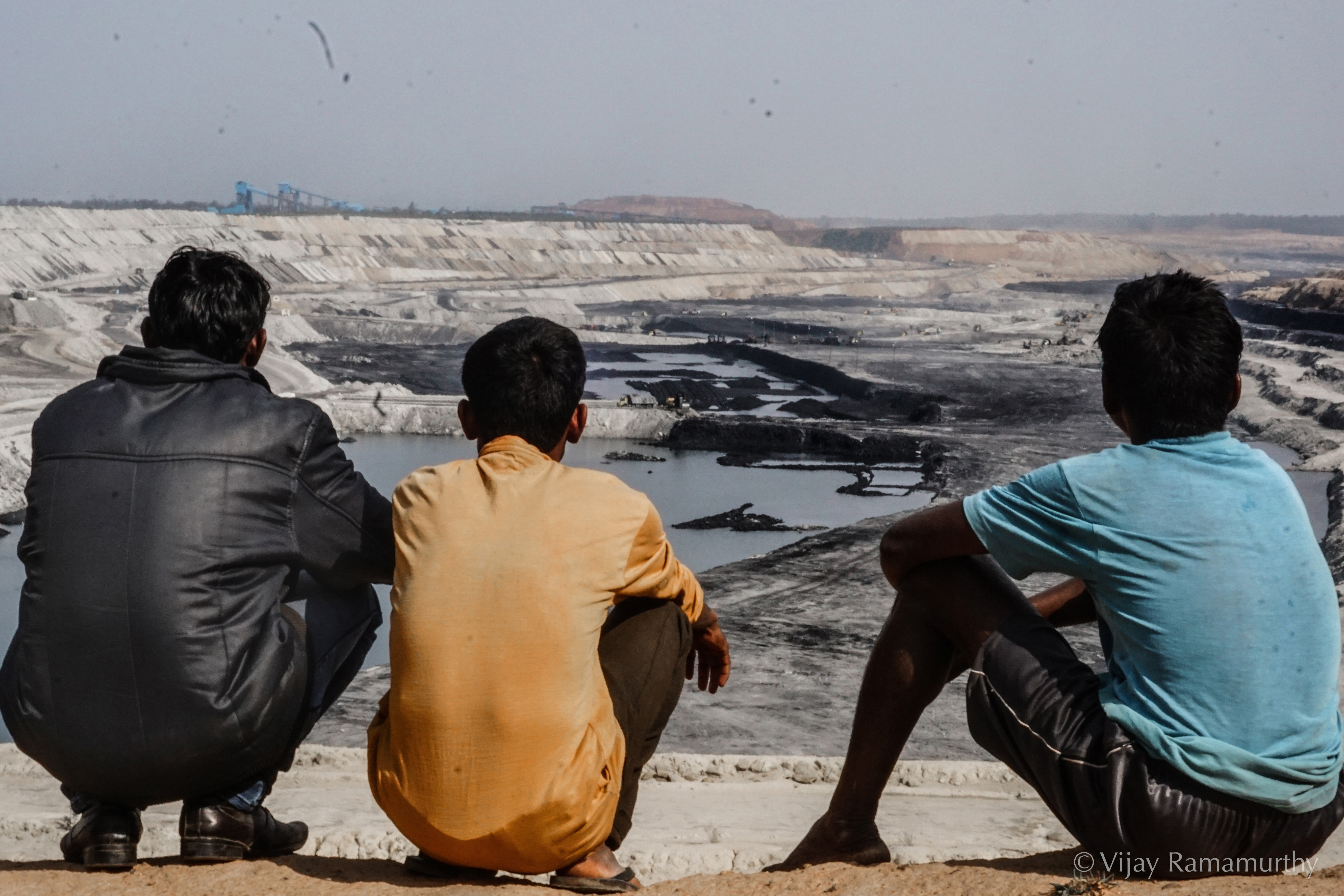 The next day, a delegation of around 200 people walked to the Governor's residence for their appointment. Anusuiya Uikey, a member of a tribal community herself, lamented, ‘Adivasi people from both the north and south of Chhattisgarh are having to walk all the way to Raipur to ask for their rights. It pains me when I see the Adivasis facing atrocities.’ She also stated that, as the conservator of areas that are under Schedule V of the Indian Constitution, she would do what was in her power to ensure that the laws enacted to protect Adivasi rights were not sidelined.

It was only when the meeting with the Governor was about to end that the people received an official invitation to meet Bhupesh Baghel, the Chief Minister (CM) of Chhattisgarh. The Adivasi marched to his residence, where they hoped to hold the CM to the promises made to them in 2015, when he stood next to Rahul Gandhi (the then president of the Indian National Congress Party) as Gandhi promised the Adivasi people that 'mining in Hasdeo will not happen without their consent.’ This led the people to infer that the Hasdeo region would be saved if the Congress Party was elected.

However, at the meeting in Raipur, the CM ‘clarified’ Rahul Gandhi’s promises made six years earlier. He stated, 'The village where Rahul Gandhi stood would be safe from mining', this time inferring that only the village they visited would be saved, and not the entire Hasdeo region. As to the Adivasi peoples' allegation of consent for mining acquired under duress, for which Adani Mining Enterprises is a defendant in court, the CM re-assured the crowd that investigations would be conducted on the matter.

Following the meeting, the Adivasi were put on government buses and sent back to their villages, holding on to the governor's willingness to uphold their rights and the CM's assurance of an investigation into the manner in which consent for the first stage of approval for Parsa coal mine was acquired. However, a bitter twist awaited the Adivasi people.

Five days after Bhupesh Baghel’s statement, the stage II clearance for the Parsa coal block was issued by the Central Government, meaning that Adani Mining Enterprises now has the 'green card' to start mining the area.

‘Whenever the government wants, it gives our land away for coal mining. So we Adivasi are not free,’ says Shakuntala Toppo — an Adivasi woman from Khirati village. 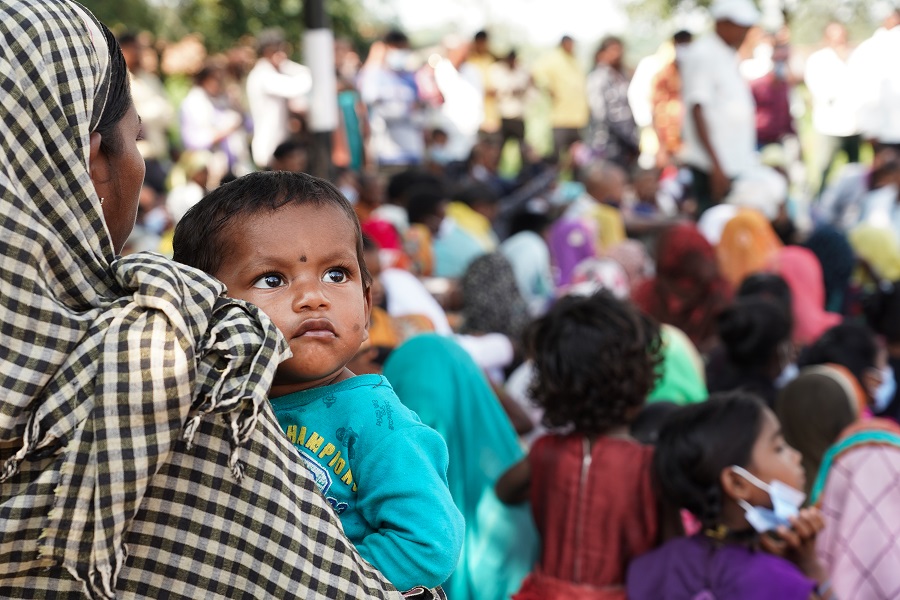 The 705 indigenous groups of India share a long history of subjugation and alienation, first under the monarchic system and later during British colonial rule. While the monarchs took advantage of the Adivasi people by turning them into serfs, slaves, and occasionally, guides for the King’s hunting party, the British colonial regime took advantage of their lands and agricultural production to serve the Crown. Well after India obtained independence from the British, the rights of Adivasi people were finally enshrined in the country's constitution in 1996 (PESA) and 2006 (FRA) as reparation for historical injustices. These laws recognised the Adivasis’ right to own forest land; to extract their means of livelihoods from the forest; to manage their natural resources; and to approve or decline any economic and social development projects happening on their lands. But have these hard-earned rights ever been meaningfully implemented? Have these laws freed Adivasis from the colonial shadow of the state?

The nightmare for the people of Hasdeo does not simply end with the 14 coal blocks allocated in their forest. It is the manner in which constitutional laws, guaranteeing their rights, are sidestepped. For the Parsa coal block, the Central Government has issued the land-acquisition notification under the Coal Bearing Areas (Acquisition and Development) Act 1957. This Act, which was earlier only to be used for land acquisition for government companies, is now being amended (see page 6, point 4 of the table in the hyperlink) to ensure that private corporations can also make use of this Act for land acquisition. Moreover, the Bill itself is not present in the public domain, robbing the people from exercising their right to dissent.

While the Adivasis' distinct cultures are celebrated on the walls of the Minister's house as part of the attempt to provide reparation for historical subjugation and erasure, their rights are being side-stepped to serve a different agenda. This, while their lives continue to be obscured under the old colonial shadow of the state-corporate nexus.

So what has changed for the Adivasi people 74 years after India obtained independence and birthed the world's largest democracy?

‘Our country may have obtained freedom from the British, but freedom has never been given to the Adivasi people. We do not accept this slavery, and we will give our bodies, souls and our lives to resist against this,’ concludes Shakuntala Toppo.