Will State Bank of India approve a billion-dollar loan for Adani’s Carmichael mine?

Recent media reports suggest that the State Bank of India (SBI) – India’s largest public bank – is ‘all set to offer’ a billion-dollar loan to Adani’s Carmichael coal mine in Australia. These reports come five years after a similar proposal was scuttled. In the absence of official confirmation from the SBI, the community has re-launched protests against the bank. The SBI has declined to say whether the proposed loan was approved at its 30 September board meeting.

On 17 November 2020, reports appeared in the Indian media stating that the State Bank of India (SBI) is all ‘set to offer’ a loan of US$675 million (AUD $923 million) to Adani for its massive Carmichael coal mine in Australia

The SBI is India’s largest government-owned bank. The reports set off a powerful campaign by StopAdani groups and Market Forces, including a dramatic invasion of the pitch by placard-wielding campaigners during an Australia-India cricket match.

According to a report by the Indo-Asian News Service (IANS), ‘the loan agreement between SBI and Adani Group is nearly done, and a ratification is expected from the bank’s executive committee soon.’ Similar reports were widely disseminated in the Indian media.

These reports come over five years after an earlier deal for the bank to sanction loans of $1 billion to Adani’s Australian subsidiary had fallen through in the face of protests from India’s political opposition. After the SBI publicly rejected reports in early 2015 that it had sanctioned the loan to Adani, newspaper reports had suggested the deal may ‘die a quiet and natural death’ because of the controversies surrounding the project.

The IANS report quoted a ‘source close to the development’ as saying ‘much water has flowed in the last 5-6 years... most of the local regulatory approvals are in place and the company is expected to start producing coal from 2021 onward.’

The media reports were met with ‘snap actions’ in four Australian cities as well as in the USA, UK, Fiji and Goa.  However, the SBI is yet to formally respond – either to the news reports or to a questionnaire sent by this correspondent. Much remains unclear about the details of the loan that is apparently being ‘offered’ to Adani by the SBI, the nationalised public-sector bank that accounts for roughly a quarter of India’s entire banking system. 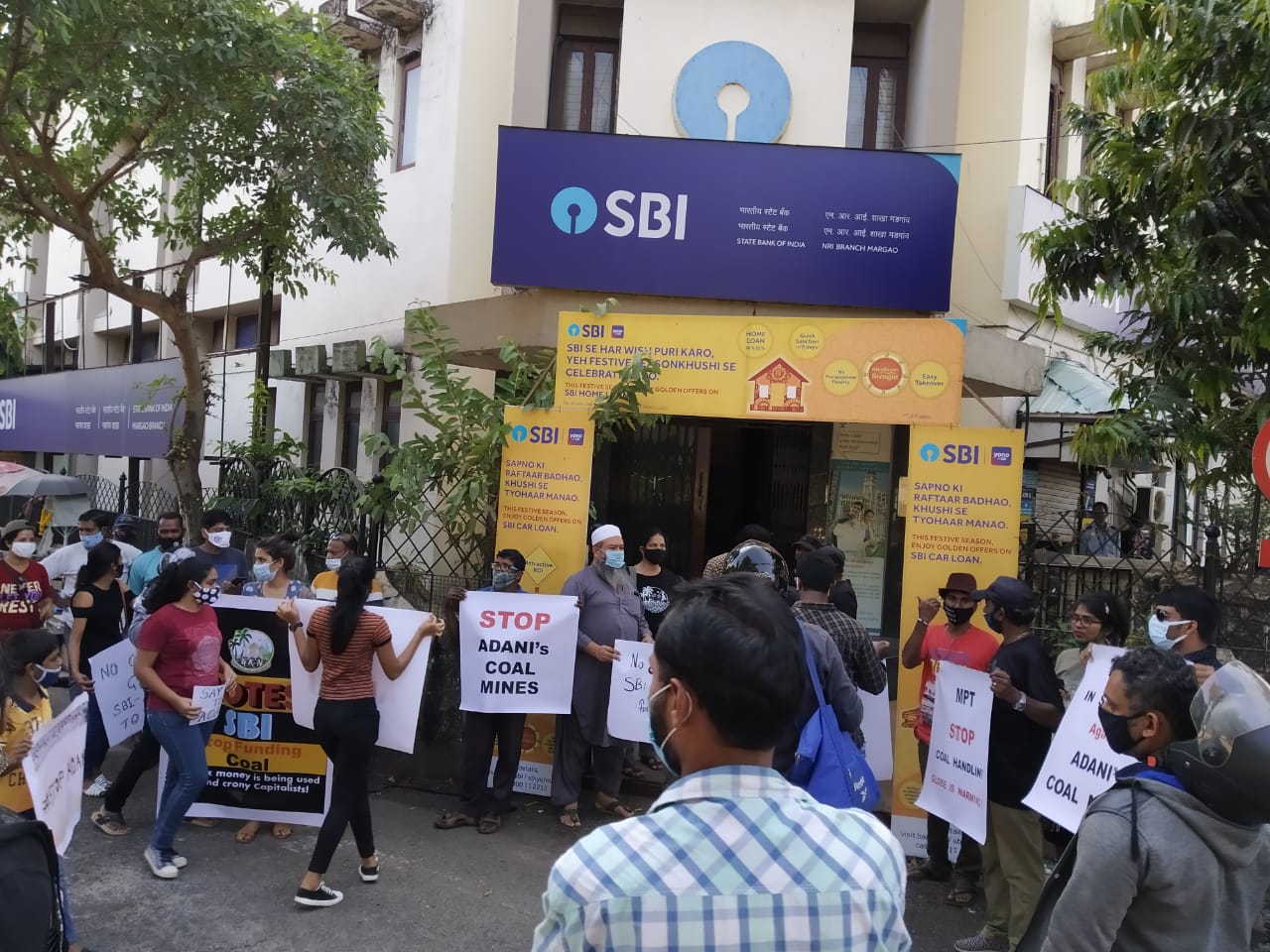 Indian Opposition parties raised a hue and cry about a proposed SBI/Adani deal in India’s Parliament in late 2014. This occurred after Adani Group chairman Gautam Adani and SBI Chairman Arundhati Bhattacharya signed a Memorandum of Understanding (MoU) for the $1-billion loan while they were the guests of India’s Prime Minister Narendra Modi on a visit to Australia for the G-20 summit meeting in Brisbane in mid-November 2014. Photographs of Modi flanked by Bhattacharya and Adani were splashed across the internet.

India’s principal opposition party, the Indian National Congress termed the deal an instance of ‘crony capitalism’ and pointed out that several major international banks – including BNP Paribas SA, Credit Agricole SA, Societe Generale SA, Barclays, Citigroup, Deutsche Bank AG, Goldman Sachs Group, HSBC, JP Morgan Chase, Morgan Stanley and the Royal Bank of Scotland – had declared that they would not finance the contentious coal-mining-railroad-port project. The list of institutions that have refused to extend financial support to an increasingly notorious coal mine has subsequently lengthened.

In March 2015, the then SBI head Bhattacharya publicly rejected the claims of Opposition parties in India, saying that the signing of a MoU did not constitute a firm commitment, and the loan deal would go through the bank’s regular processes of due diligence.

A former director of the bank later revealed to this correspondent on the condition of anonymity that the SBI’s Board of Directors had declined to approve the loan at the time.

Has the Loan Proposal Been Revived?

According to the Australian NGO Market Forces, 89 companies across the world have publicly declined to participate in Adani’s Carmichael project, including over 25 global insurance companies, 40 banks and numerous engineering companies. While Adani has claimed that it will carry out the project nevertheless, campaigners have not let up on their pressure. It is in this context that the reports of the SBI’s imminent involvement have emerged.

In mid-September 2020, an influential lobbyist based in New Delhi who requested anonymity told this correspondent that the SBI was once again considering a proposal to finance Adani’s Carmichael project, and that the proposal was to come up at a meeting of the SBI’s Board of Directors held on 30 September.

This was the last board meeting attended by the Chairman of the SBI who succeeded Bhattacharya – Rajnish Kumar, who retired from his post on 6 October, at the end of his statutory three-year term. Bhattacharya had retired from her post as SBI Chairman in October 2017 after her term had been extended by a year by the Indian government.

Under the procedures adopted by Indian banks in the public sector, every loan must be sanctioned by a particular branch of the bank.

Following an application by a company for a loan to a particular branch, it is supposed to be scrutinized within the branch and then at various levels of the bank’s internal hierarchy to check for the viability of the loan, the creditworthiness of the loan applicant, the quality of the business plan and other factors before it arrives at the bank’s head office. Once all due-diligence checks are complete, loans above a certain value must be cleared by the bank’s executive committee and board of directors.

The only indication in the recent media reports of this process being followed is the following statement by the unnamed source quoted by IANS who reportedly said that ‘the loan agreement between SBI and Adani Group is nearly done and a ratification is expected from the bank’s executive committee soon.’

What remains unclear is which corporate entity or entities in the Adani Group company would receive the loan, which SBI branch would disburse it, and whether the current proposal is a modified version of the previous loan application or a new one altogether.

While the SBI has two branches in Australia – in Melbourne and Sydney ­– it is not known whether either of these branches will disburse the loan.

The Adani group is a widely diversified conglomerate, with subsidiary companies across the world in multiple jurisdictions. Its Australian mining subsidiary (recently renamed Bravus Mining and Resources) is understood to be a closely-held company, with its ownership structure passing through various holding companies in offshore jurisdictions commonly thought of as ‘tax havens’, and ultimately tracing to companies owned directly by members of the Adani family (known in Indian parlance as the ‘promoters’ of the group).

Significantly, with this entire corporate structure being ‘closely-held’ as opposed to some of Adani’s other businesses run by companies that are publicly listed, the answer to the question of which Adani company is to receive this loan from the SBI may be convoluted.

Emailed questionnaires sent to spokespersons of the SBI and the Adani group, as well as to Gautam Adani and to Dinesh Kumar Dhara (who took over as SBI Chairman from Rajnish Kumar), asking these questions went without any response at the time of completing this article.