India’s opposition Congress party has alleged that India’s Modi government has taken steps to ease the process of privatizing the Container Corporation of India (CCI) in order to expedite a takeover by the Adani Group. The Opposition has warned of a potential Adani monopoly over India's import-export transport infrastructure.

Gourav Vallabh, a spokesperson for the Congress party, addressed the media in New Delhi on Monday 13 September to raise a series of questions on the planned privatisation of the Container Corporation of India (CCI) – a government-controlled company. Pointing out that Adani Ports and Special Economic Zones (APSEZ) had publicly declared its intent to acquire the company, Vallabh asked why a decision had been made by the central government that would lead to the CCI being forced to take on a large debt just prior to its privatisation.

The largest shareholding stake in CCI is held by the Indian Railways, which is owned by the government. The company was hived off from the Railways in 1989 to manage a network of what was then seven Inland Container Depots (ICDs). Since then, the CCI’s network has grown to 60 ICDs and, in 2020-21, it handled cargo weighing over 3.6 million TeUs – or twenty-foot equivalent units, a measure of volume in units of twenty-foot-long containers. Aside from providing inland transport by rail for containers, it has also expanded to the management of ports and air-cargo complexes, and in establishing cold-chain logistics.

In November 2019, the government decided to privatise CCI, in which it holds a 54.8 per cent stake. The Cabinet then resolved to sell 30.8 per cent of its stake to a private concern and also to hand over management control of CCI to it. At the company’s current market capitalisation (share price on the stock exchange multiplied by total number of shares) of Rs 45,121 crore (US $6 billion), the 30.8 per cent stake is worth around Rs 13,900 crore (US $2 billion).

The sale of CCI’s stake, however, failed to materialise as there remained lack of clarity over an important issue, namely, the control and ownership of large tracts of land owned by the CCI. As an entity that had been hived out of the Indian Railways, much of the CCI’s operations are on land that it leases from the Railways. Until recently, the CCI paid a variable lease rate to the Railways for its land use that was calculated on the basis of the volumes of cargo that the CCI moved.

In April 2020, the Railways notified a new Land Lease Fee (LLF) regime for industrial use of its land, tying the lease rate to the market value of the land. At that time, the LLF was fixed at six per cent of the market value with annual increments of seven per cent for a lease period of five years. In recent months, the government moved to cut the LLF.

In June, the Ministry of Railways circulated a draft Cabinet note proposing that the LLF be further reduced to two-three per cent, and the lease period extended to 35 years, with industrial users required to pay up-front 99% of the lease value. A government source was quoted by the Financial Express saying that the process of the stake sale in CCI would begin as soon as the new land-use policy of the Railways was approved by the government.

For the CCI, this means a large payment of fees for the 24 ICDs that it operates on land owned by the Railways. In his press conference, Professor Vallabh said this would mean using up the company’s cash reserve of Rs 2,500 crore (around A$ 460 million) and taking on additional debts of Rs 3,500 crore (around A$ 645 million).

The Congress spokesperson raised a number of questions on the policy change.

First, he noted that the company has consistently been earning a profit and has been paying dividends to the national exchequer. Why then, he asked, is such a company which is of ‘strategic importance’ being privatised in the first place?

Pointing to recent comments by Karan Adani, APSEZ’s CEO, that ‘acquiring [CCI] will be a breeze [for the Adani Group]’ and describing CCI as a ‘strategic target’ for the Adani Group, the Congress spokesperson asked why the new land-lease regime extended the lease period to 35 years.

‘Is the proposal to reduce LLF an indirect way to hand over developed government land to private parties for the long term?’ he asked, pointing out that the Adani Group already is the largest private operator of ports and airports. 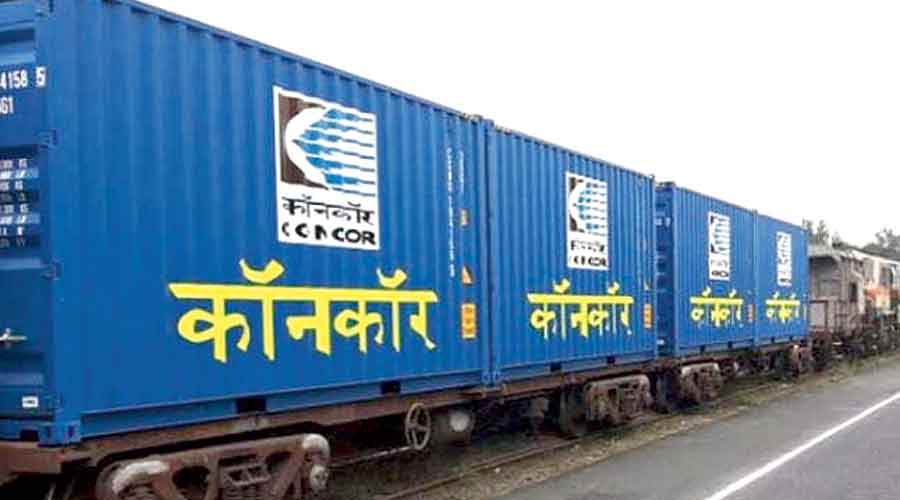 Vallabh added that if the CCI’s ‘dry ports’ or ICDs also went into Adani’s hands, ‘they will have a monopoly over the export-import (trade) of the entire country.’ Will they ‘not exploit this monopoly for commercial gains?’ he asked rhetorically.

Additionally, Prof Vallabh pointed out that the CCI is a ‘zero-debt company’ whose incomes, net profits and dividends have been consistently growing. It will have to raise debts of Rs 3500 crore (about US $480 million) to pay the 99%-upfront land-lease fee under the new regime, which will lead to a reduction in its valuation, he said.

‘Is the entire transaction planned to reduce the valuation of [CCI]?’ he wondered.

Finally, he pointed out that land owned by the Indian Railways had been acquired from farmers at concessional rates and even free of cost in some cases, for the expansion, maintenance and development of the country’s railway infrastructure. How can this land be ‘handed over to a private party for commercial use in a backdoor arrangement?’ he asked, demanding that land owned by the CCI be returned to its original owners if it is not being used by the Railways, since the land belongs to the farmers of India.

In a recent interview Karan Adani had called the potential acquisition of CCI a ‘fast-track’ strategy for his company APSEZ, whose subsidiary, Adani Logistics Limited, has been investing heavily in logistics assets to build a private-sector rival to the CCI, which is the current market leader. He said that acquiring CCI would offset ten years of investment and growth of an APSEZ-built alternative.

A spokesperson for the ruling BJP party, Gopal Agarwal, said in comments to the Hindustan Times that the ‘BJP’s policy for disinvestment is that the government has no role to be in business. Professional and business decisions of companies, whether private or government, need to be taken on professional considerations. You cannot wait for a company to be destroyed and then go for disinvestment, like the Congress did for Air India. In that case, there will be no takers. When the company is a growing concern, only then it gets a proper valuation.'