In southern India, Adani’s work on a huge port expansion has been brought to a standstill. Protesting farmers and fishing communities have blocked off Adani’s worksite with a permanent shelter under which up to 100 people gather each day. Adani’s mega-port project at Vizhinjam has been blamed for serious beach erosion and the degradation of fisheries. Now Adani faces a new obstacle. A government advisory body has withheld approval for an essential piece of ancillary infrastructure – an underground railway tunnel.

A central advisory panel has red-flagged the Adani Group’s intention to construct an underground railway tunnel to link the Vizhinjam container port with the hinterland. It is proposed that the 9.43-km-long tunnel be drilled underneath an area of houses and gardens in the state capital of Kerala. It’s also an area that has a history of large-scale tectonic disturbances. Ironically, these concerns are coming to light hard on the heels of the appointment of a four-member expert committee to examine whether nearby large-scale coastal erosion is a result of the Adani Group’s construction of breakwaters at Vizhinjam. 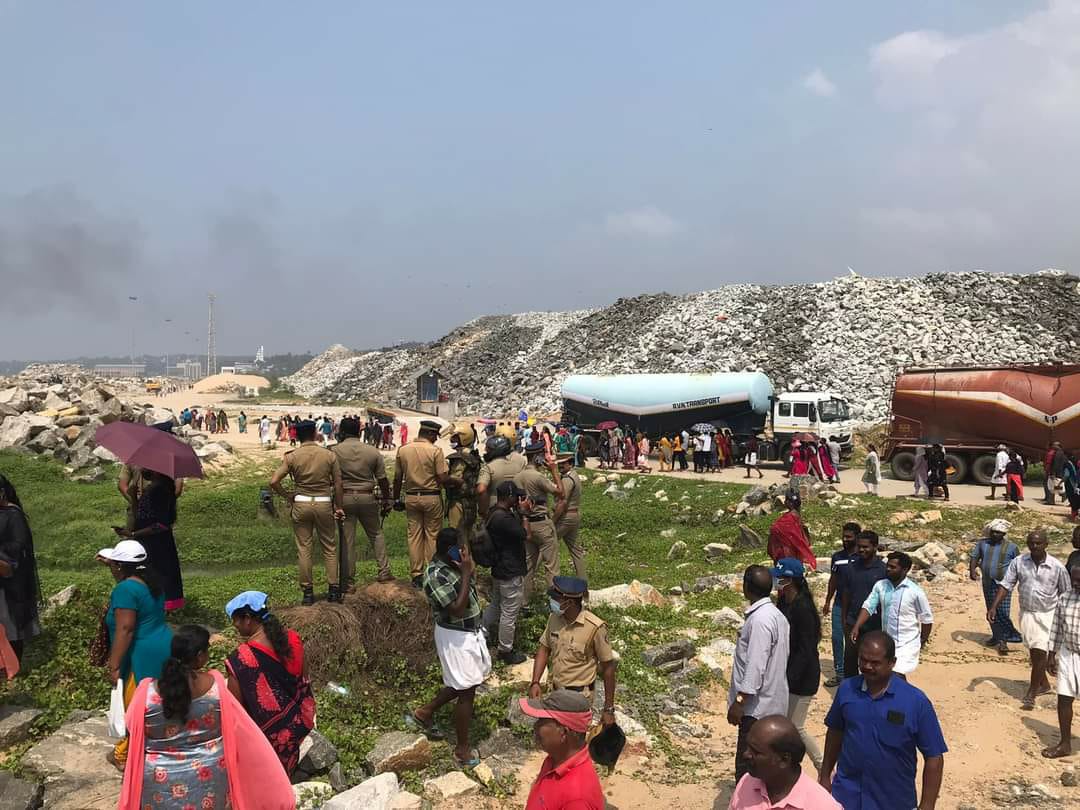 The Adani Group is developing a trans-shipment container port at Vizhinjam in a joint venture with the Kerala government. Construction of a breakwater for the Vizhinjam port has allegedly led to major changes in local tidal movements, thereby eroding the coasts of some of the major towns of Kerala. Similarly, quarrying in the hinterlands of Kerala to feed the breakwater’s massive appetite for rocks has allegedly resulted in landslides and ecological harm. 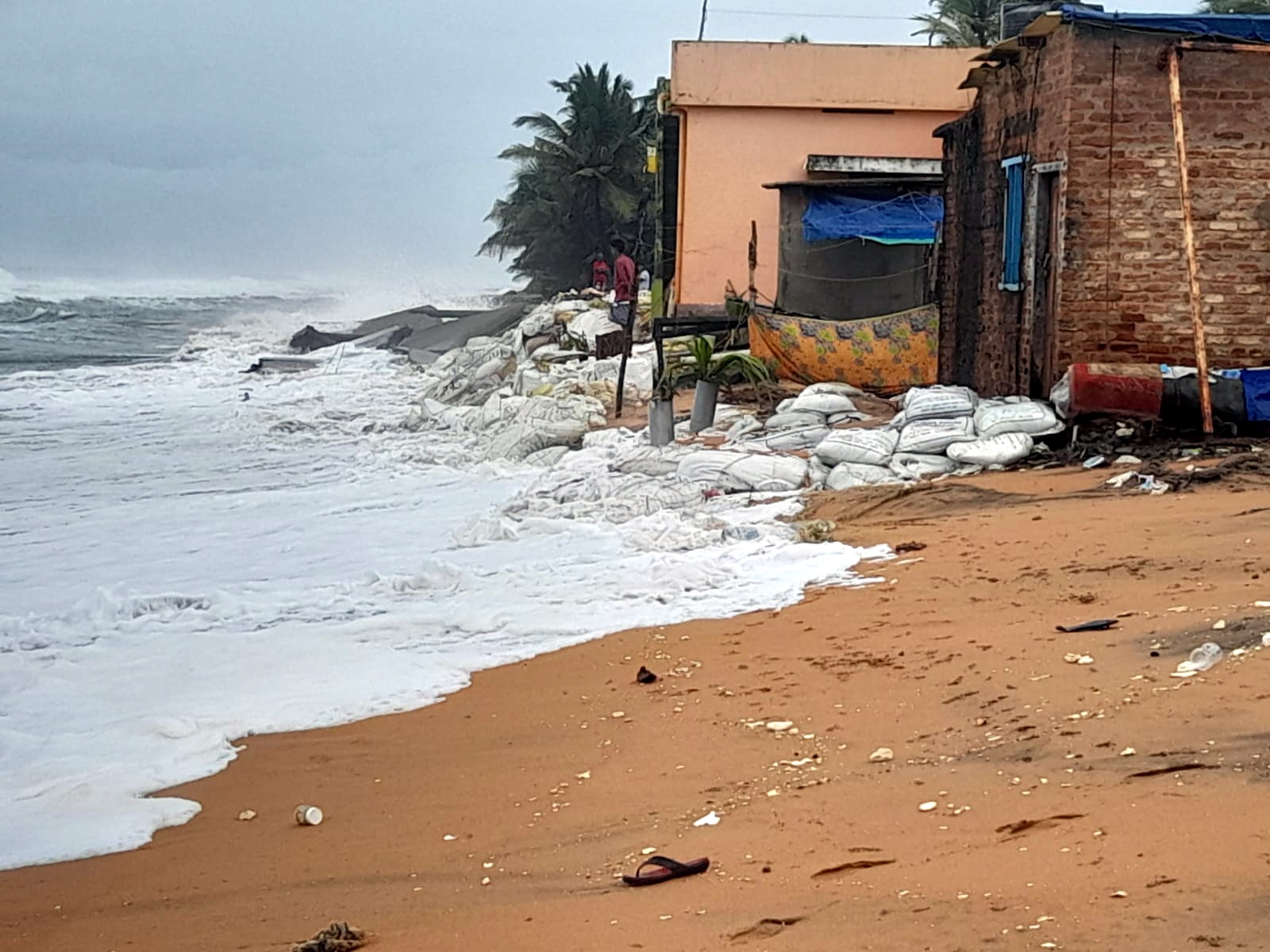 The entry to the proposed tunnel is only about 130 meters from the high-tide mark at Vizhinjam. Nonetheless, the project proponent sent a proposal to the central government to construct the underground railway tunnel without even conducting a risk-assessment survey. The central government’s Expert Appraisal Committee (EAC), after examining the proposal at a meeting held in mid-September (See Agenda No. 3.1), said that a comprehensive study should be undertaken to examine seismicity on the proposed tunnel’s stability, as well as its impact on underground water sources and the livelihoods of fishing communities. 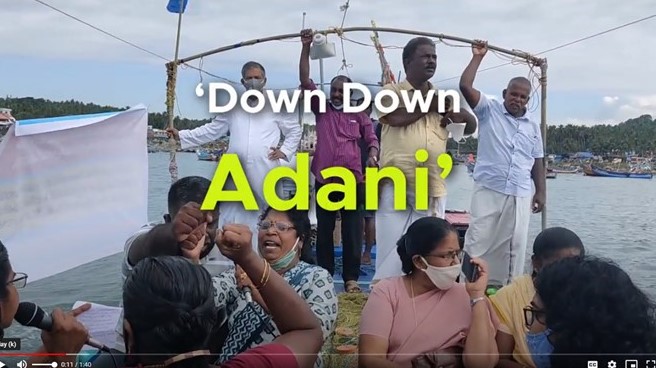 ‘The topography is highly undulating both in the sedimentary and crystalline outcrops indicating the presence of large-scale tectonic deformation that took place in the geologic past,’ noted the EAC in the minutes of its meeting.

The EAC minutes further state: ‘Vibration impact of tunnel construction and operation on aquafer, aquatic life system as well as humans and residential and commercial infrastructure should be studied … The area has also appeared to be used by the local fisherman community. The Project Proponents needs to undertake detailed study of the risk of tunnel inundation during high tidal surges and cyclones. The proponent also needs to study the impact of tunnel construction in the CRZ [Coastal Regulation Zone], and on the access and use of it by fisherman community.’

Notwithstanding the expert body’s concerns about seismicity, the state of Kerala has not been prone to major earthquakes in the recent past. As per the Vulnerability Atlas of India, a document prepared by the central government mapping the vulnerability of different regions of the country to natural disasters, the entire state falls in a moderate damage risk zone in terms of seismicity. Kerala is classified under Zone III in the seismicity zonal classification of India by the National Center of Seismology of the Union Ministry of Earth Sciences. In comparison, the densely populated state of the national capital of Delhi falls in Zone IV which is a high-damage risk zone. The expert panel has recommended that the assessment of seismicity should be conducted by a reputed institute. 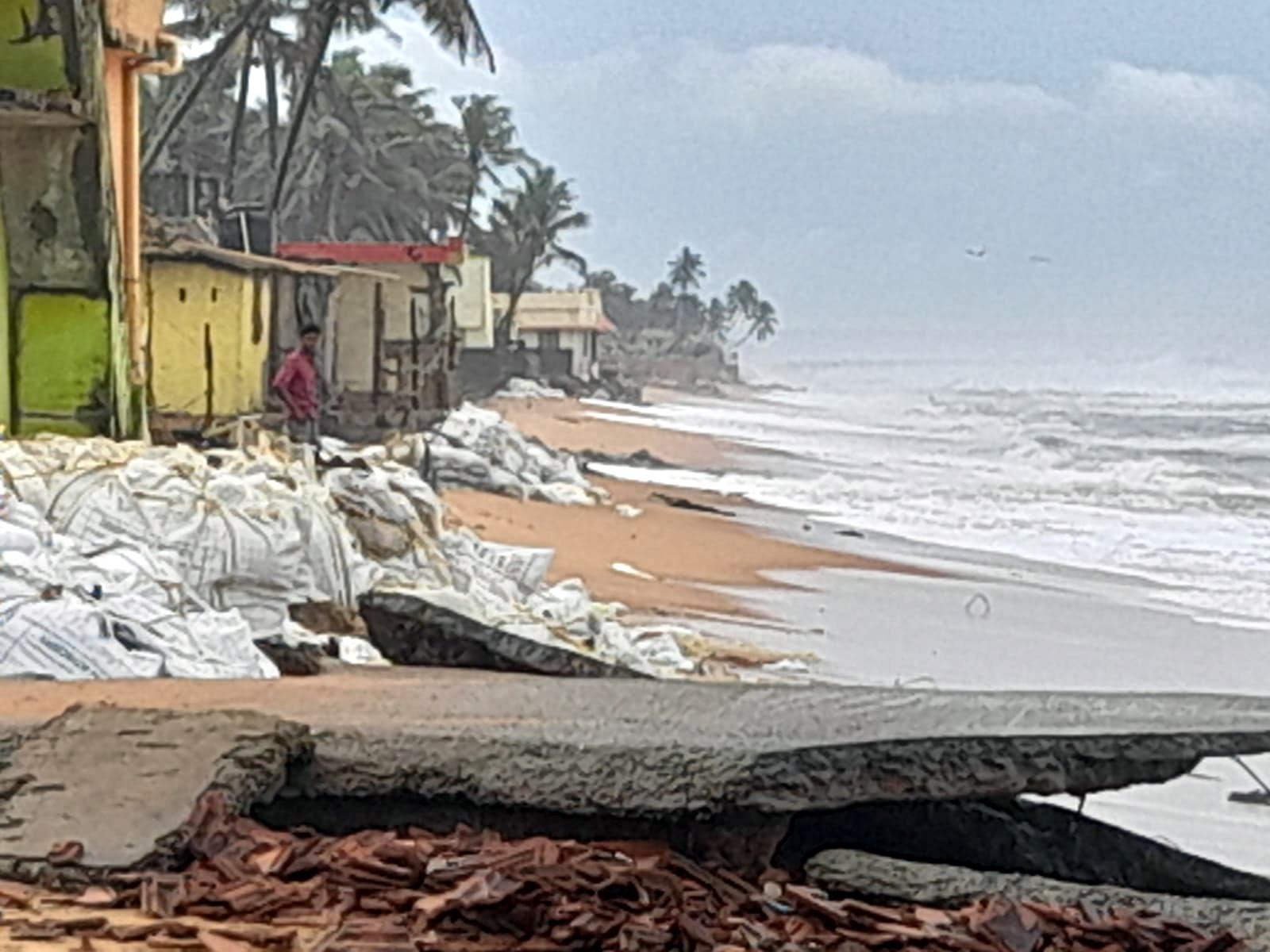 The project proponent was allowed to construct a 10.7-km railway line as ‘an elevated structure’ from the port to the hinterland when the project was formally approved by the central government of India in 2014.

In August 2022, Adani sought an amendment to the formal approval, proposing to convert 9.43 km of the railway route into an underground tunnel. The total cost of the underground railway is estimated at US $130 million. The EAC ruled out an amendment to the existing Environmental Clearance, given the scope of work involved in the construction of a railway tunnel, while seeking additional information from the project proponent. 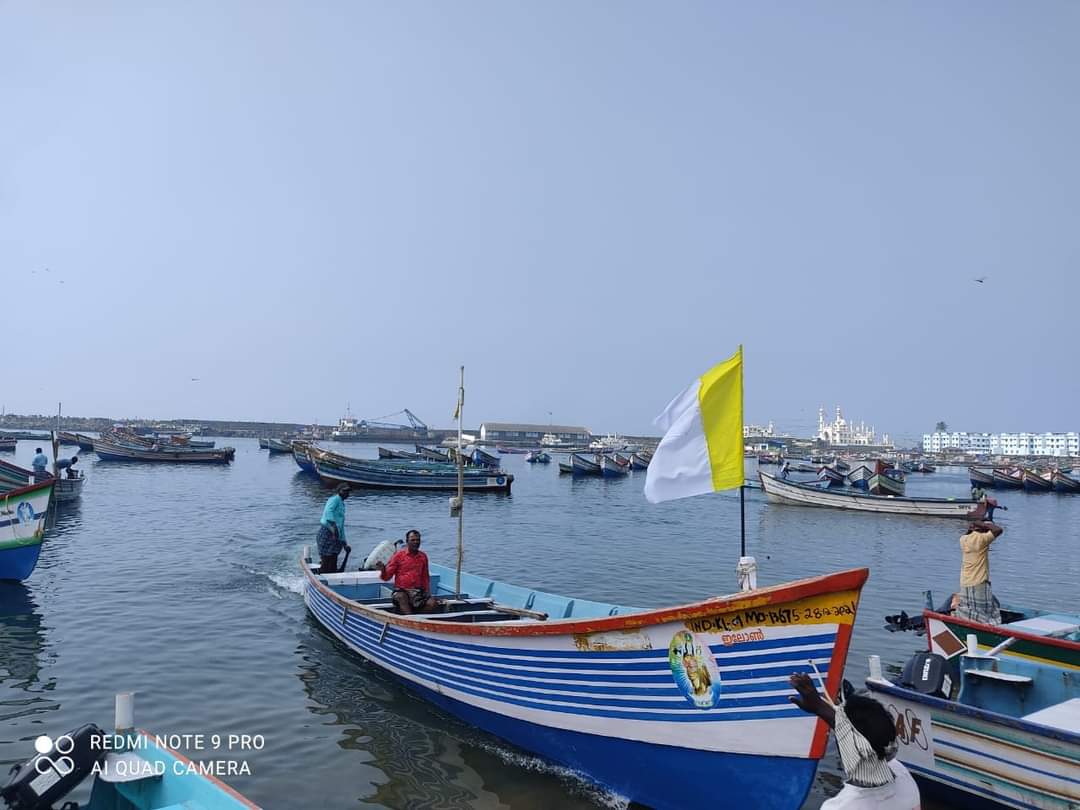 ‘Based on the deliberations in the meeting and information provided by the proponent in support of the project, the EAC returns the proposal in its present form as the current proposal is for change in the scope of the existing proposal and cannot considered as amendment in environmental clearance proposal,’ the EAC noted in the minutes of the meeting.

Given that the EAC has ruled out any go ahead for the underground tunnel by amending the existing approval, it is likely that a new Environment Impact Assessment (EIA) will have to be prepared by the project proponent to obtain a separate clearance. This will likely entail public consultations with local communities to seek their consent.

‘We learnt about the proposed underground railway tunnel only from the website of the environment ministry,’ AJ Vijayan, spokesperson of CoastalWatch, a collective of leaders from the fishing communities of Kerala, told AdaniWatch. 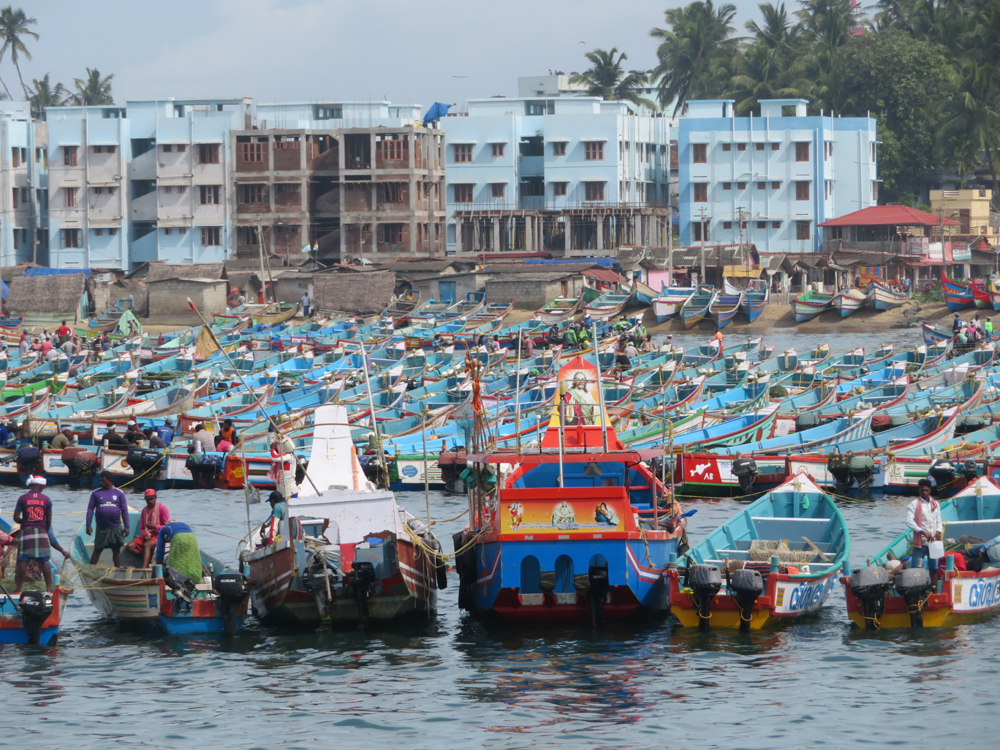 The minutes of the EAC meeting reveal no cogent reason given by Adani for a change to the railway’s route. Land above the tunnel would continue to be used in its present form, with the remaining length of about 1.2 km obviously undergoing a significant change in land use. The underground portion will pass beneath at least four inhabited villages in the Neyyattinkara tehsil (an administrative unit) of Thiruvananthapuram district, that is, Balaramapuram, Pallichal, Athiyannur and Vizhinjam.

The expert body of the ministry noted that the proposed tunnel is located in an area where rainfall intensity can vary significantly. It has therefore raised a requirement with the project proponent for a detailed study with respect to the worst-case scenario for extreme hydrological events including the highest expected intensities of rainfall, flash floods and cloud bursts.

‘Comprehensive hydrological and hydrogeological investigations shall be conducted by a reputed institute for the site and should be incorporated in the EIA report. Collapse of soil or rock due to submarine ground water while making the tunnel should be studied and mitigation measures to be ascertained,’ state the minutes of the EAC meeting.

It is not known yet what would be the cumulative impact on the terrain of the region, which is already threatened by coastal erosion, if the proposal for an underground railway tunnel is given the go ahead.

In the recent past, coastal erosion at tourist hotspots such as Kovalam or alongside the road leading to the Thiruvananthapuram International Airport have been attributed by several commentators to the construction of huge breakwaters for the Vizhinjam port. The green light for such construction was given inadvisedly, say the critics. Beaches have vanished and houses have collapsed when rough waves have broken onto the shore. Casualties have also been reported from the capsizing of fishermen’s boats at the entrance to the traditional fishing harbour of Vizhinjam, allegedly as a result of waves ricocheting off the L-shaped breakwater that is being constructed by Adani. Long-running protests against the controversial Vizhinjam development have occurred. 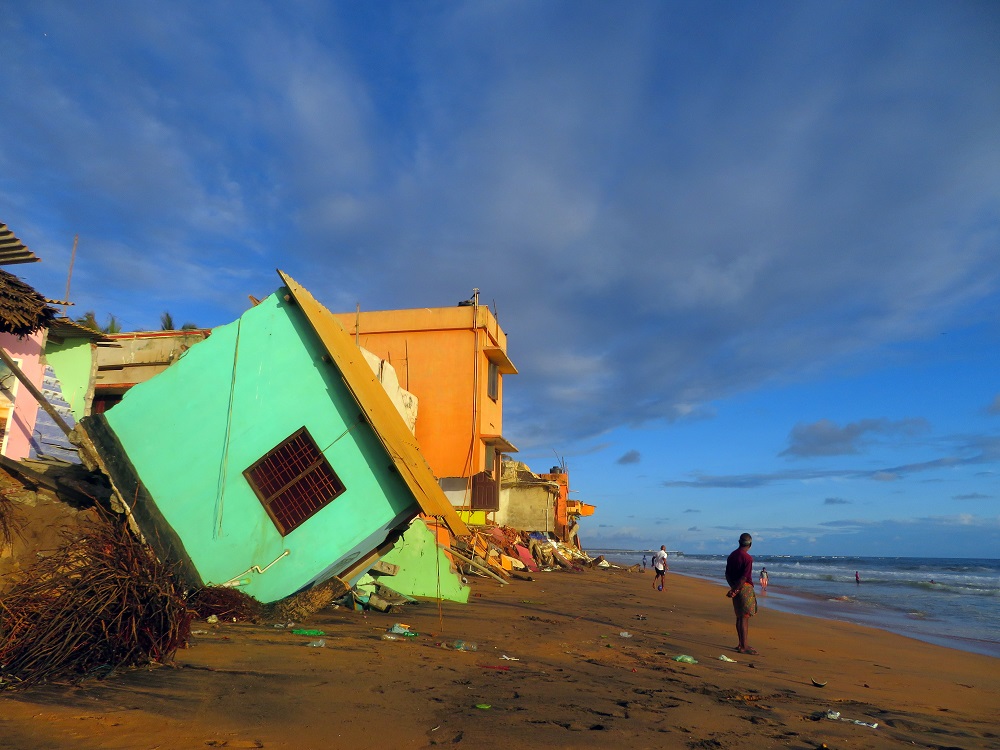 The Adani Group argues that its construction activities have nothing to do with coastal erosion or the collapse of houses along the beach. However, the Left Front state government was forced to appoint an expert panel following a relentless agitation by fishing communities about coastal erosion affecting their livelihoods. The protest has lasted well over 120 days and has frequently brought construction to a standstill. The protest has also been backed by the Catholic Church.

‘Our agitation has exceeded 120 days now’, said Vijayan. ‘Work on the port project has come to a complete halt. A change in plan to construct a railway tunnel will only delay the completion of the project.’

The expert panel appointed by the Kerala government to study coastal erosion will be headed by a former senior official of India’s Central Water and Power Research Station, based in Pune in the western coastal state of Maharashtra. It also includes Dr PK Chandramohan, a former chief engineer of the Kandla port in the Kutch district of Gujarat, the vice-chancellor of Kerala University of Fisheries and Ocean Studies Dr Riji John, and Dr Tejal Kanitkar, associate professor of the prestigious Bengaluru-based Indian Institute of Science. Apart from hearing the concerns of local communities, the panel may suggest recommendations for the prevention of coastal erosion.

The Kerala government has claimed that monitoring of the coastal area has found no evidence that breakwater construction had caused coastal erosion. The Kerala government has been monitoring environmental changes in a stretch of shoreline 20 km either side of the port in accordance with the directions of India’s national environment ministry and the National Green Tribunal. The monitoring has been carried out by respectable institutions such as the National Institute of Ocean Technology, the National Centre for Earth Science Studies, and the privately-owned L&T Infra Engineering Limited.

The Kerala government has approved the extraction of boulders from 19 quarries in the hinterland to meet the demand generated by the construction of the huge breakwaters. Local people and environmental experts say this large-scale disturbance is causing landslides and ecological damage. 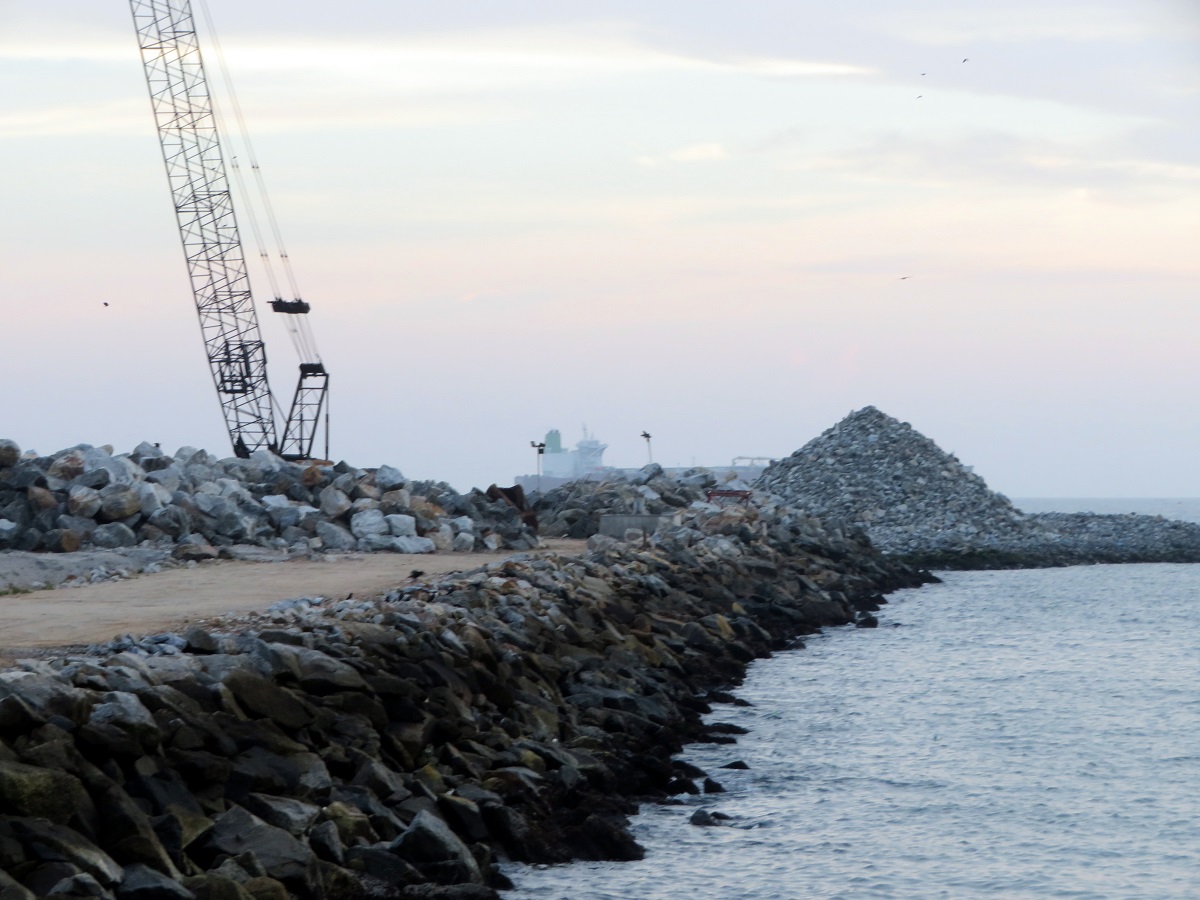 A 2017 study by the state-owned Kerala Forest Research Institute (KFRI) says there are at least 5924 granite quarries in Kerala with sizes ranging from 0.02 to 64.04 hectares. Their cumulative area is 71.58 square kilometers. The study listed numerous adverse environmental impacts of the quarries, including dust pollution, loss of canopy cover, depletion of the water table, reduced infiltration of rainwater, and noise pollution. (See Appendix 3 on Page 8 of Mapping of Granite Quarries in Kerala, India: A Critical Mapping Initiative).

Following a spate of landslides, the Kerala government imposed a temporary ban on all quarries across the state in August 2019. Thirty-one landslides had occurred within a couple of weeks of rain and flood.  At least 80 lives were lost in two massive landslides in Wayanad and Malappuram. Nevertheless, the government lifted the ban less than two weeks after the rain subsided. Residents and activists have alleged that Adani Group’s appetite for granite will not only result in further ecological disasters but will also destroy the heritage of Kerala by damaging houses and places of worship.

In addition, a massive 80-km-long ring road project is proposed to connect the port city of Vizhinjam with the historic town of Navaikulam. Nearly 170 families face eviction for this four-lane carriageway passing through villages, gardens and country roads. Approximately 506 hectares of land are earmarked for takeover for the project but local communities are already opposing it. A separate collective of local farmers has sprouted in opposition to the ring road.

‘The ring road was conceived many decades ago to avoid traffic congestion within the city limits of Thiruvananthapuram,’ said Mr B Ramesh, President, Kerala Shastra Sahithya Parishad, a progressive outfit of teachers, writers and intellectuals in Kerala that is supporting the fishermen’s agitation against the port project. ‘There are many families opposing eviction for the road. We will make our stance clear on this particular project in the days to come.’

‘But the Vizhinjam port project is a complete disaster owing to the environmental and sociological issues involved with it’ Mr Ramesh added. ‘We opposed this project even before a contract was signed with the Adani Group for development of the port. This port project is entirely unnecessary and should be abandoned.’