'Kerala’s Army' up in arms against Adani

In the south-western Indian state of Kerala, an Adani company is constructing a massive port in the midst of fishing villages, beaches and tourist resorts. The company’s deep-water Vizhinjam trans-shipment port has attracted headlines for all the wrong reasons – delays, coastal erosion, public subsidies and damage to fisheries. Since 30 September 2020, a group of determined fisherfolk has tackled Adani, blocking roads into the construction site with their boats. These fisherfolk are a pillar of the local community, having undertaken countless dangerous rescue missions in 2018 when huge floods devastated the local area. Now they are attempting to rescue their own livelihoods. For several months, Jisha Elizabeth has been attending protest meetings and events. She now reports for AdaniWatch on the current situation at Vizhinjam.

When the floods of 2018 devastated Kerala, a group of daring fishermen did the unthinkable. Navigating their fishing boats like an armada through the deluge, they saved numerous lives and property, like trained rescue personnel. Their selfless service earned the praise and gratitude of the government and people alike. These brave sons of the sea were hailed as Kerala’s Army by the state government. Now, this army, based on the southern tip of India, is on a war footing against the Adani Group, the business conglomerate that enjoys the patronage of the state and central governments. The fishermen are fighting to protect the marine ecosystem, their livelihood and their lives, which they say are being destroyed by the Vizhinjam deep-sea port construction undertaken by Adani.

According to many reports, the Adani Group enjoys the direct and indirect support of the Modi government and its bureaucracy. Even though the opposition is rich and powerful, the children of the sea have vowed to stand strong and fight this battle for survival.

Breakwater construction is a crucial part of the project. On 30 September 2020, the fishers of Vizhinjam mounted a blockade against Adani’s works, blocking the approach road, which is used to transport rocks in huge trucks to the site, with their boats – both intact ones and those that have been damaged as a result of port construction. They have also been doing a 24/7 sit-in. Fearing violence, the state government has deployed two buses of police at the strike venue. 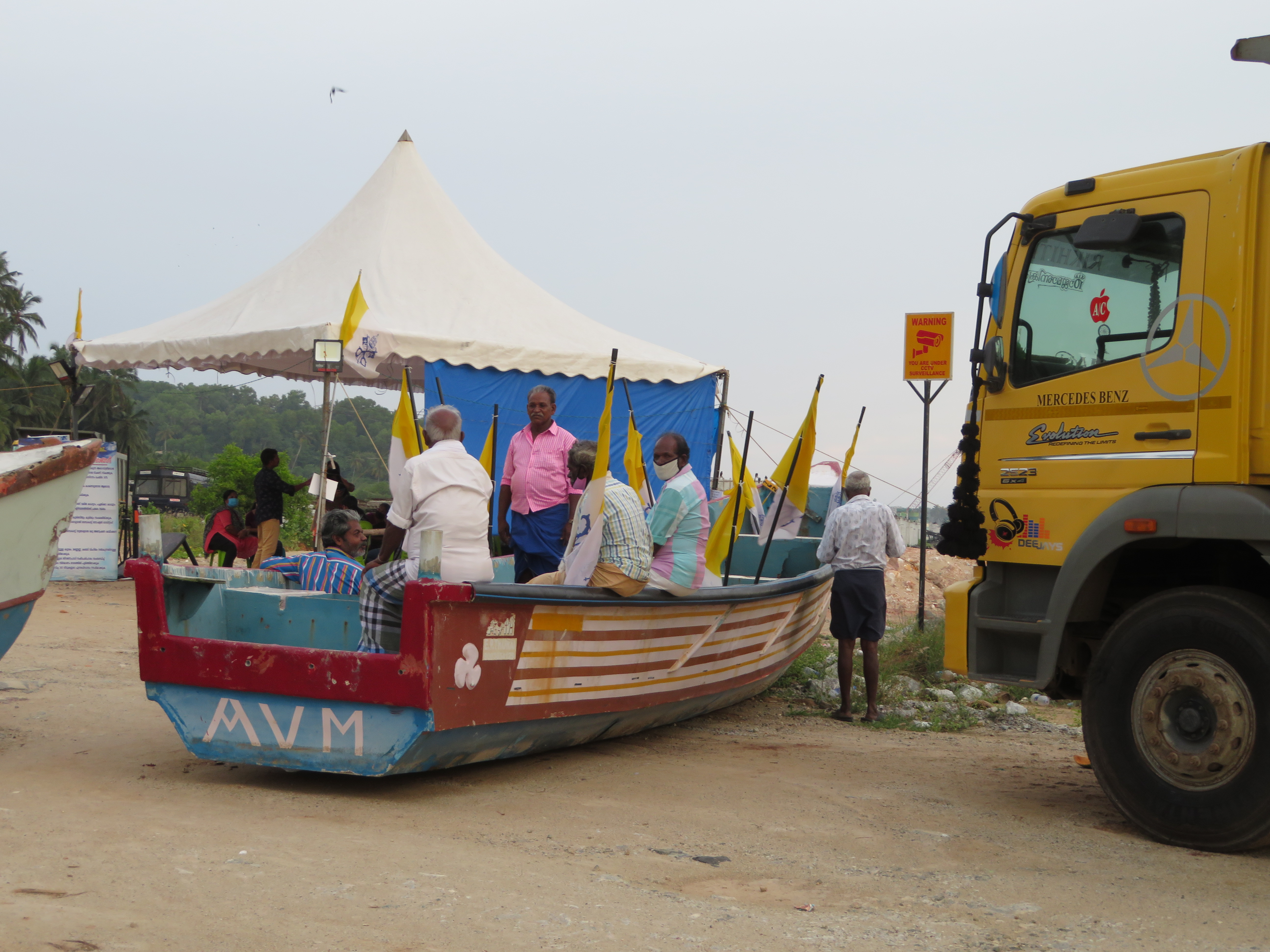 The Adani Group has distanced itself from the dispute, describing it as an issue between the fisherfolk and the government of Kerala.

Regular announcements from the nearby Church of the Lady of Good Voyage at Vizhinjam keep the morale of the protestors high. Around 4000 families – approximately 25,000 people – in this village are members of this parish. And the church has installed speakers in all streets of this densely populated area. The probability of the fisherfolk gathering en masse with a single announcement has forced the Vizhinjam International Seaport Ltd (VISL) and the Adani Vizhinjam Port Private Ltd (AVPPL) to temporarily halt all construction activities. 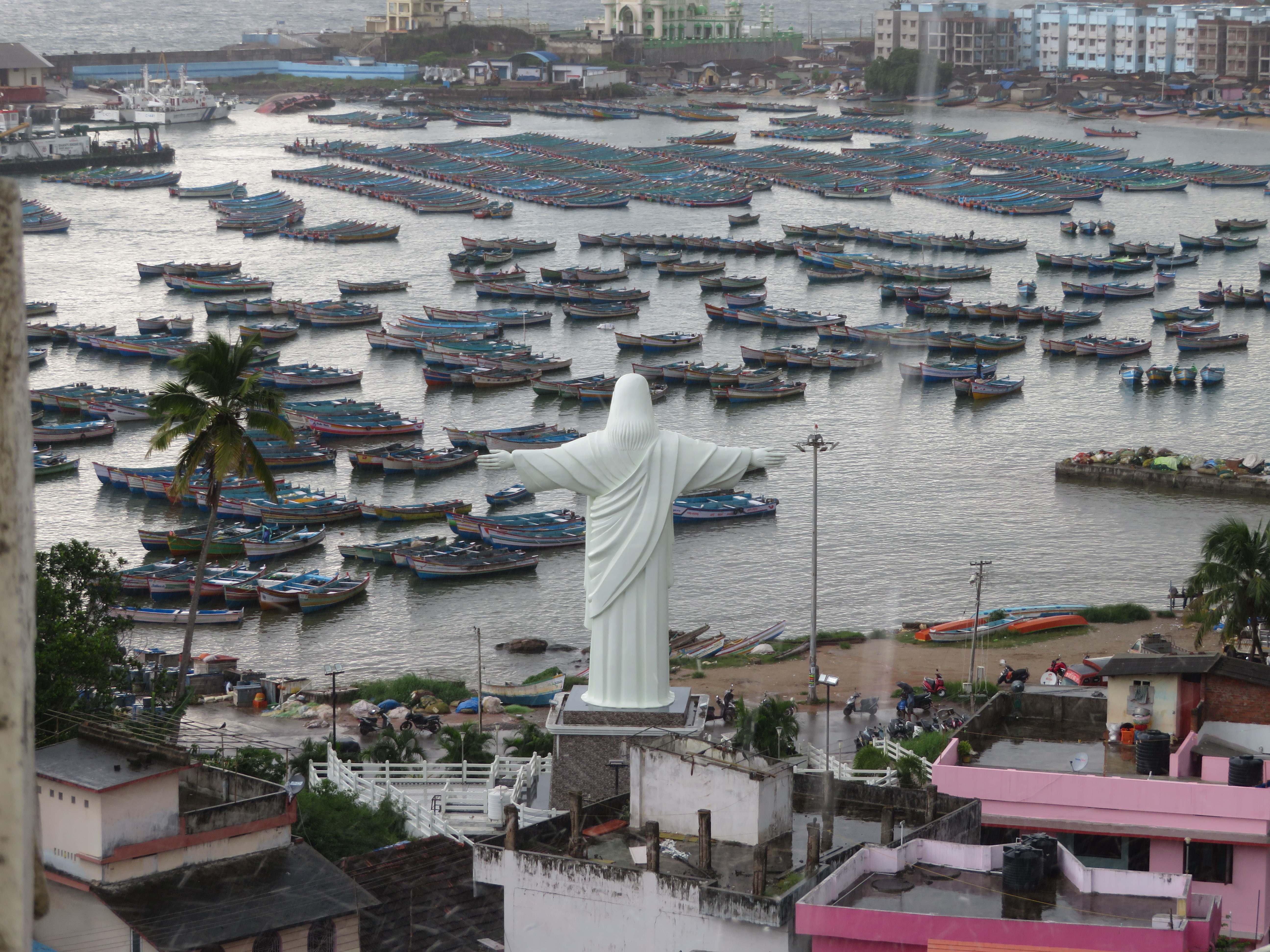 According to taped secret conversations by Adani spokespeople, the company incurred a loss of 10 million rupees in 17 days. Media reports have referred to similar losses. This prompted the government, the port authority, the district authority and the Adani Group to hold discussions with the fisherfolk on 16 October 2020, the 17th day of the agitation. But the talks were to no avail. During the six-hour long meeting, protesters rejected arguments put forward by representatives of the government and the Adani Group. Father Michael Thomas, one of the protest leaders, made it explicitly clear that the community will no longer give in to fake promises.

The state government accepted that the grievances of the fishing community are legitimate but declined to issue government orders to ensure that their demands were met. The government representative offered to sign assurances on the VISL letter pad. But the protestors did not accept that such a letter would be legally binding. The protest leadership warned against trying to fool the community. They pointed out that before the project commenced in 2015, several Government Orders had been issued but none had been executed. One of the promises made was for a drinking-water project that would cost AUD$ 1.4 million. But the protestors allege that the project is being used to supply water for the port construction.

Adani says it has made good on its promises. 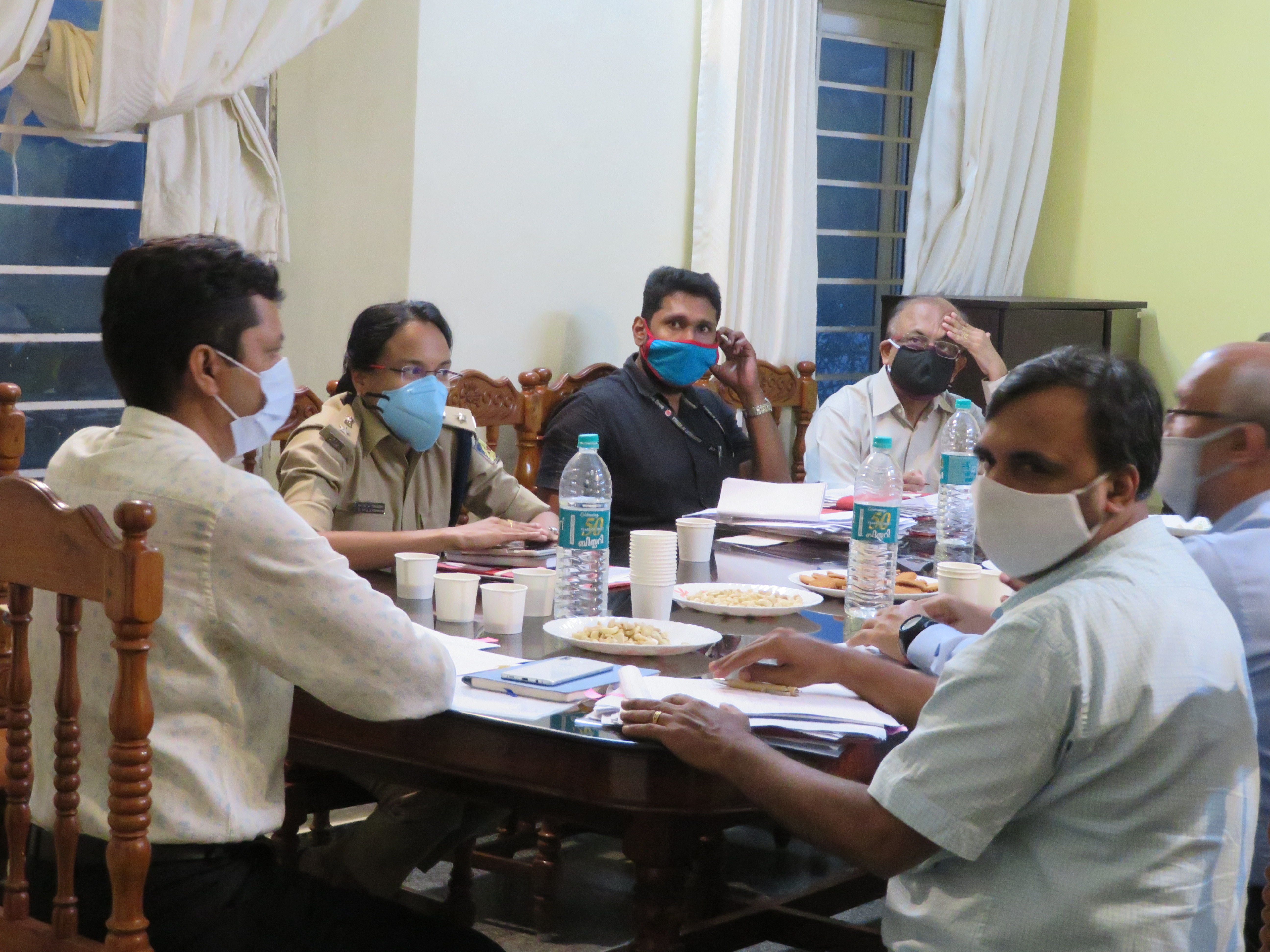 ‘Adani has employed more than 200 people from within the region, delivering on its commitment to local villagers who requested employment opportunities,’ a spokesperson said.  ‘Adani is also committed to training local young people before commencing work, so they are prepared and highly skilled for port operation work. Everyone has the right to voice their opinion in a democratic way within the factual and legal framework. All stakeholders need to be respectful and not put themselves or anyone else in harm’s way.’

The protesting fisherfolk have said that the environmental impact assessment (EIA) conducted in 2013 was inadequate and have demanded that a new study be conducted immediately. They said that the impacts on the fishing industry, such as pollution, damage to boats and reduced fish catch, have been much higher than estimated in 2013. The fishing community demanded that the social-responsibility fund instituted by the Adani Group be subjected to a social audit. They also demanded that an expert commission conduct an inquiry into the project. They protesters alleged that in most cases the expert committees filing reports about the project are sponsored by the Adani port company. They added that these experts tweak their findings to suit the company’s interests and alleged that the government also takes decisions based on these questionable reports.

In response, the Adani spokesperson said that the EIA was prepared by L&T-Ramboll, a reputable consulting firm appointed by the government of Kerala prior to Adani’s involvement in the project and that appropriate experts had been employed. 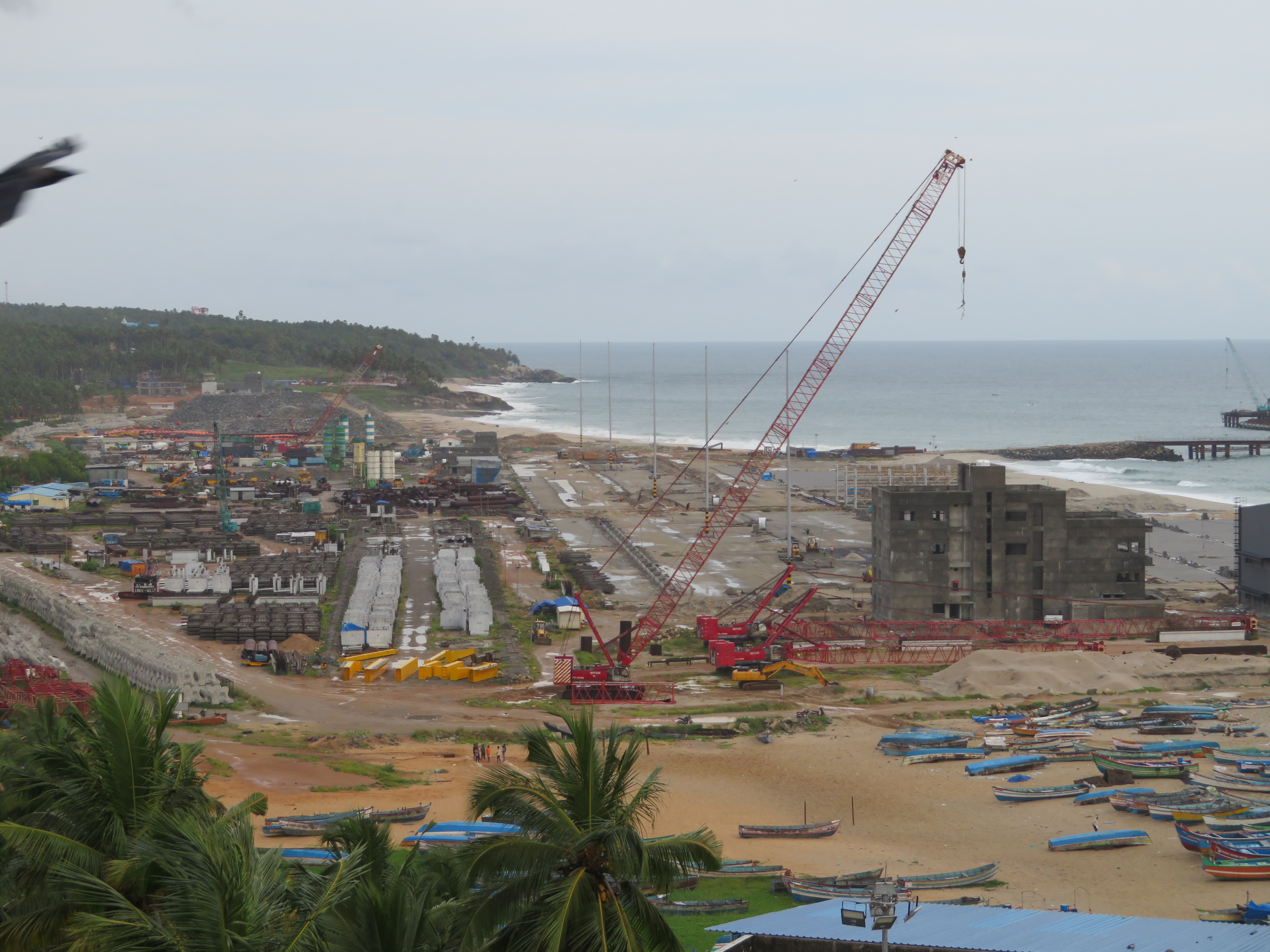 As the protest entered its 24th day, the state Ports Minister Kadannapally Ramachandran came forward for mediation. He said that though an expert panel had earlier rejected the claim that piling works at the port site had damaged houses in the nearby villages, a new directive has been issued to the district collector to look into the matter afresh. He said that, as opposed to the previous government’s AUD$ 1.5-million package for rehabilitation, the current government has distributed around AUD$ 15 million as compensation to 2623 people. Adani, too, referred to the verdict of the expert panel but said that, as a goodwill gesture to the local community, it had offered to pay $AUD 76 to each of 243 households in the region. The spokesperson said that the district administration had not confirmed that any such payment is required.

The minister said that various government departments have to liaise regarding policy decisions from the government to meet the 18 demands raised by the protesters. In a press release distributed at Thiruvananthapuram on 23 October, he assured protesters that the government will take a favourable position on matters that can be resolved immediately. He also added that the related appeals committee has been directed to submit a report after studying any unsolved compensation claims for loss of livelihood.

But the protesters have not given into these mediation efforts. And they have decided to accelerate the agitation from 1 November following a discussion held at the church's parish hall on 24 October.

‘If the government does not come to a practical solution, we will be forced to stand against the port construction. Every fisher from across the state will gather in a massive protest against this government and surround the Secretariat,’ parish secretary Benans Lopez stated emphatically. Vizhinjam port will face the same fate as that of Vedanta’s Sterlite Industries plant in Tamil Nadu, which is subject to a court order to shut down following months of protest and legal challenge.

Following a further meeting on 29 October, the government expects that an agreement will soon be reached with the protestors following the mediation efforts by state Ports Minister Ramachandran Kadannapally and Tourism Minister Kadakampally Surendran. But the strikers have explicitly said that they won’t budge until the government provides them with written assurances.

The young and old are staying put. Elderly fishermen such as Jose (76), Transilas (70), Patrikal (65), Joseph Fernandes (70), Francis Christopher (70), Anthrudama (70) and Susadima Sylvester (64) spend the day in the boat that has blocked several large Taurus trucks. Young men take turns to keep watch at the protest tent.

An in-depth story of all the issues associated with Adani’s Vizhinjam project will appear soon. 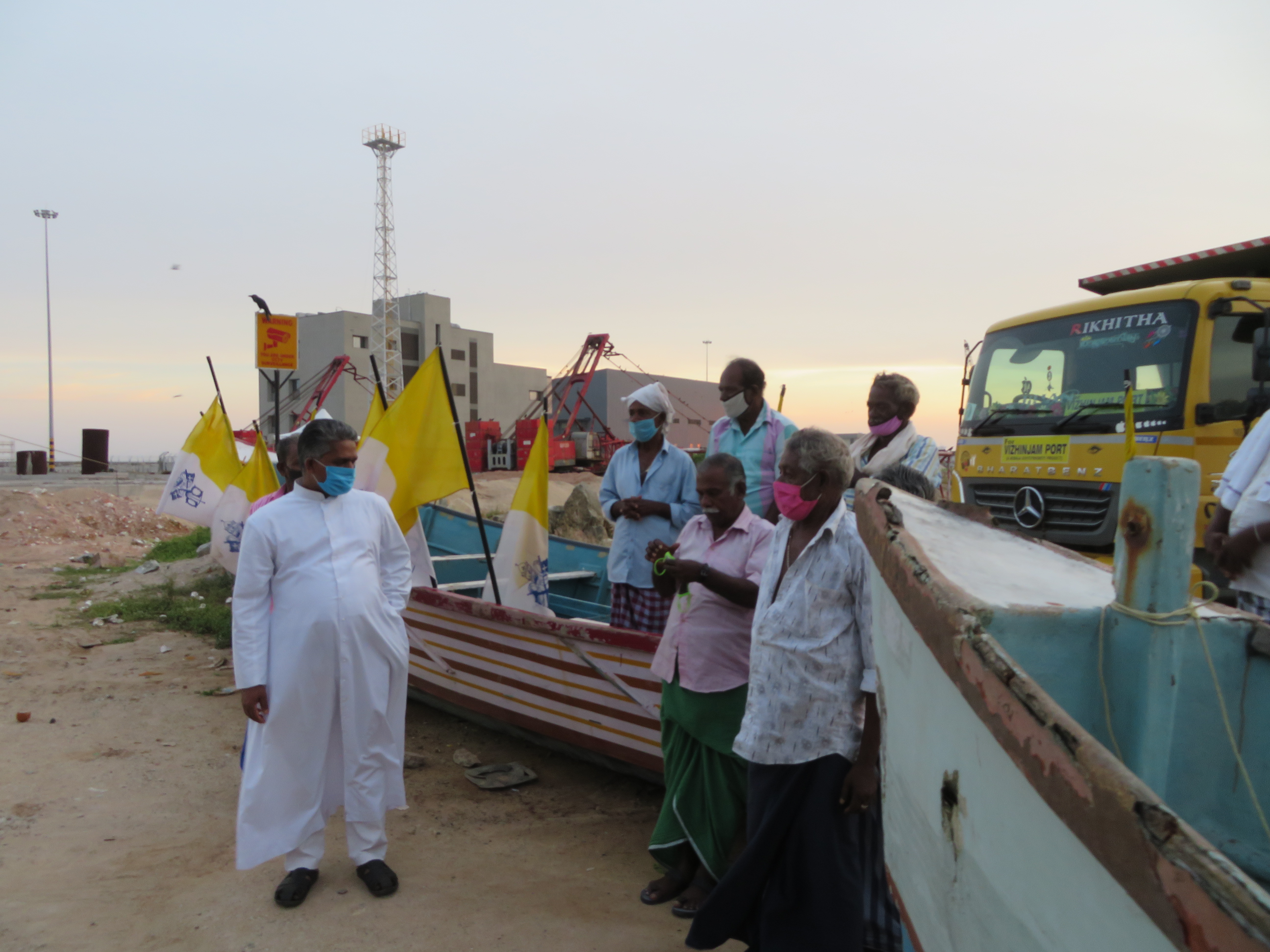