Financial commentators have been critical of a deal between the State Bank of India (SBI) and the Adani Group that enables Adani to loan money to small enterprises while sharing the risk with a public-sector bank. The practice is known as ‘co-lending’ and is regarded in some sectors as another example of the crony capitalism that is currently rife in India. Here is a warning that the deal could transmogrify land use in India, favouring large corporations over the millions of small landholdings that currently exist.

In colonial times, the peasantry had to borrow from private moneylenders. According to reports of the Provincial Banking Enquiry Committee, these moneylenders in turn borrowed from commercial banks. But while disbursing credit to the peasants and charging exorbitant interest rates, the money lenders at least bore the whole of the lender’s risk. The banks from whom they borrowed did not bear any risk in the event that the peasants could not pay back the loans they had obtained from the moneylenders. The banks, in short, had nothing to do with the ultimate borrowers. 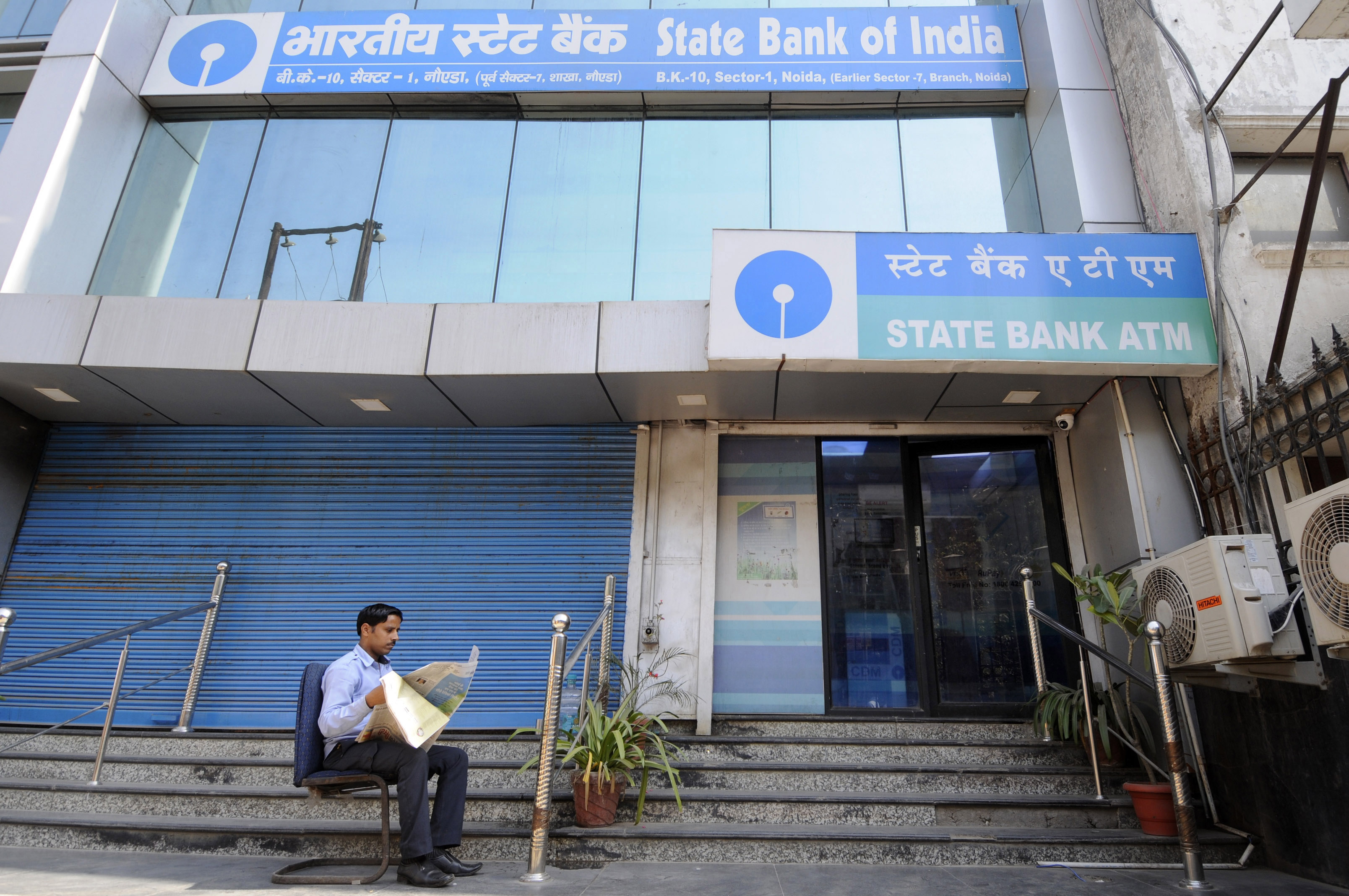 But, with a new arrangement being put into effect, of which the deal between Adani Capital and the State Bank of India (SBI) is an example, there will be co-lending, with the bank paying 80% and a ‘non-bank financial company’ (NBFC) such as Adani Capital paying 20% of the loan. The NBFC will obviously decide whom to lend to and on what conditions, subject, one presumes, to certain restrictions imposed by the Reserve Bank of India’s (RBI) guidelines. 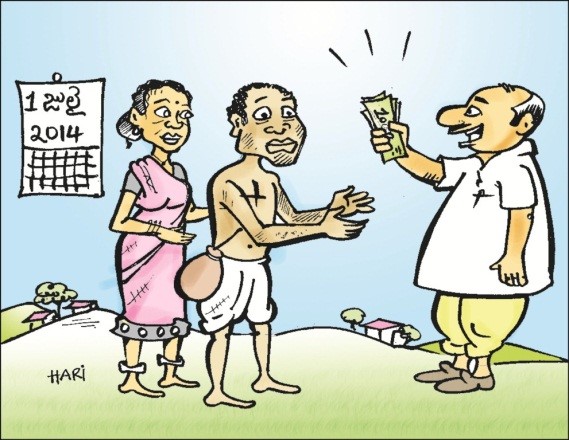 The NBFCs, in short, are in a far better position than the moneylender of colonial times: they decide to whom to lend and on what terms but hardly run any risk of the sort that a colonial moneylender had to run. At the same time, the bank is in a far worse position than a bank in colonial times: it has no say in who the ultimate borrower is but bears most of the risk of lending.

The Modi government has, in one stroke, extended favour to its capitalist patrons (the owners of the NBFCs) whose businesses can now expand rapidly and whose profits can now soar, without their having to run any significant risks. And it has extended this favour at the expense of the nationalised banks that are being run to the ground, a fact over which it will shed no tears at all. 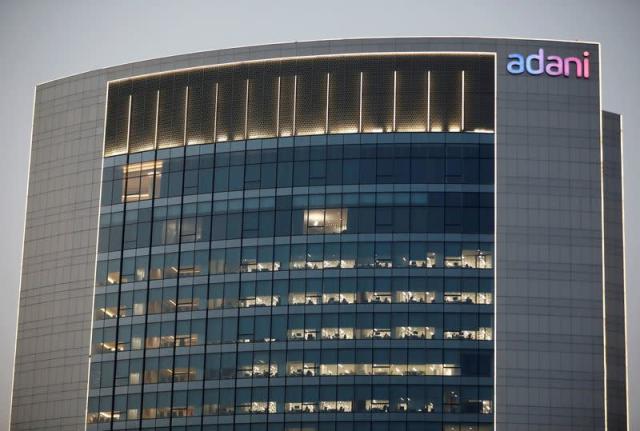 Already plans are afoot to make the depositors bear the nationalised banks’ risks, in which case the government will not have to pay from the budget to cover the losses of such banks. And if losses mount, then it can always privatise these banks ‘for a song’ which it has been keen to do anyway and for which it will then get a very valid excuse.

One obvious question remains unanswered: why is this being done? Is there an iota of benefit that this arrangement will bring either to the peasants or to the MSME (medium, small and micro enterprises) sector, or to the nationalised banks, or to anyone other than the capitalist owners of NBFCs? The answer is a resounding ‘no’. And one would like to come across a single government spokesperson to contradict this ‘no’ with a valid argument.

The SBI’s official claim in defence of its co-lending agreement with Adani Capital is that it would help to ‘expand customer base as well as connect with the under-served farming segment of the country and further contribute towards the growth of India’s farm economy’. But this argument is just laughable.

The SBI is a massive bank, the largest in the country, which has 22,000 branches all over India compared with about 60 branches of Adani Capital; it has 14 million credit accounts with farmers and Rs 2 trillion outstanding credit to farmers, compared with 28,000 and Rs 10 billion, respectively, for Adani Capital. To say that Adani Capital will ‘help expand the customer base of the SBI’ which the latter could not otherwise have done (for else there was no need for the co-lending deal) is like saying that ISRO (Indian Space Research Organisation) must have a deal with a firecracker-manufacturing unit to improve its rocket-launching ability!

In fact, even to call this deal a public-private partnership is to over-stretch definitions. In public-private partnerships, even though they are all characterised by the private sector making profits while the public sector bears the risks, the private sector at least brings something to the deal; one may not think much of what it brings, but it does not come empty-handed. But that is not the case here. Adani Capital in this case is bringing nothing whatsoever to the deal with SBI. It is a pure case of the SBI helping Adani Capital with financial resources and also bearing the lender’s risk while getting nothing in return so that the latter can expand its business.

It is scandalous for a public-sector bank to be used by the government as if it is part of the government’s jagir (part of a feudal land system). It is disgraceful on the part of SBI to fall in line with such an arrangement; and it is utterly disgraceful, too, on the part of RBI, which is supposed to have an overall supervisory role over the banking sector of the country, to acquiesce to such a deal. 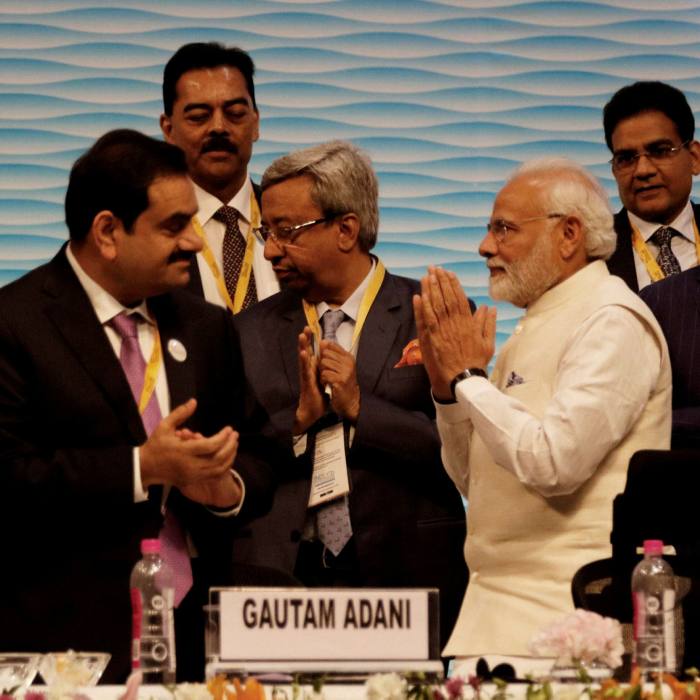 There is, however, more to it than just benefiting the NBFCs owned by corporate giants. One of the main objectives of the now-repealed farm laws was to change the pattern of land use in the country away from the production of food grain. This has been a long-term demand of the metropolitan countries, faithfully echoed by the corporate-financial oligarchy, and a host of pro-imperialist economists. The reason for this demand on the part of the metropolis is to have the land currently devoted to the production of food grain shifted to producing crops that the metropolis demands but cannot produce at all, or in adequate quantities, or all the year round (it has a surplus of food grains which it wants to sell to third world countries in lieu of such goods). For the domestic corporate-financial oligarchy, as long as farmers are producing food grains that are procured by the government at assured pre-announced prices and distributed through the public-distribution system, the scope for corporate profiteering through encroachments into the agricultural sector remains constricted.

Not surprisingly, therefore, this is an issue on which the interests of imperialism, and of the domestic corporate-financial oligarchy converge; and there is no dearth of economists promoting their cause by demanding the end of the system of government procurement at the minimum support price, by ‘advising’ the farmers to move away from producing food grains, and so on.

The three farm laws were a brazen attempt on the part of the Modi government to change the current system which also ensures food security for the country. The repeal of those laws in the face of implacable and admirable resistance from the farmers has left the government red-faced vis-à-vis international agribusiness and its own domestic corporate backers. Its desire is to change the pattern of crop production, and hence land use, by other means. And channelling government institutional credit through the domestic corporate-financial oligarchy, through NBFCs owned by this oligarchy, is one such means. 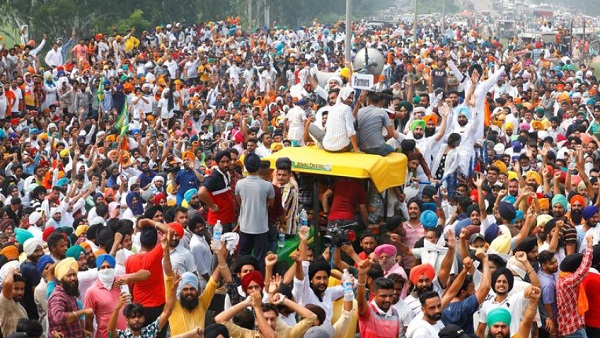 Here again, we are confronting the rejuvenation of a colonial-style regime. Under colonialism, since land revenue had to be paid by specific dates and times, the peasants had to borrow in order to meet the revenue demand. And the traders, often the East India Company’s own agents, gave them advances for this purpose on the condition that they grow specific crops and sell them to the agents at pre-contracted prices; this is the way that the cultivation of crops such as opium and indigo was encouraged in India.

Credit, in short, is a powerful means of changing land use, and the SBI-Adani deal is a way of achieving this. In other words, through such ‘nationalised banks-NBFC’ deals the government is trying to achieve what the three farm laws could not. Such deals must be opposed with the same intensity and single-mindedness with which the farm laws were opposed, for it is part of the same fight.

Emeritus Professor Prabhat Patnaik taught at the Centre for Economic Studies and Planning in the School of Social Sciences at Jawaharlal Nehru University in New Delhi, from 1974 until his retirement in 2010. He was the vice-chairman of the Kerala State Planning Board from June 2006 to May 2011.