A special correspondent Jan 11, 2023
In a devastating blow to media diversity in India, the Adani Group has taken over one of the last independent TV news stations in the country.

The Adani Group is now the majority owner of the Indian television news network NDTV (New Delhi Television) after its co-founders, husband and wife Prannoy and Radhika Roy, sold most of their stake to the Group over the Christmas period. In a statement, the Roys said they have had discussions with Adani Group chairman, Gautam Adani, and that they are ‘hopeful that he will preserve [NDTV’s] values of Trust, Credibility and Independence.’ However, former high-profile NDTV anchor, Ravish Kumar, who resigned from the network as the Adani takeover proceeded, says that the move was engineered to remove his voice as a prominent critic of the Modi government, remarking: ‘He (Adani) who does not respond to journalists’ questions, threatens a defamation suit… is expounding on press freedom.’ 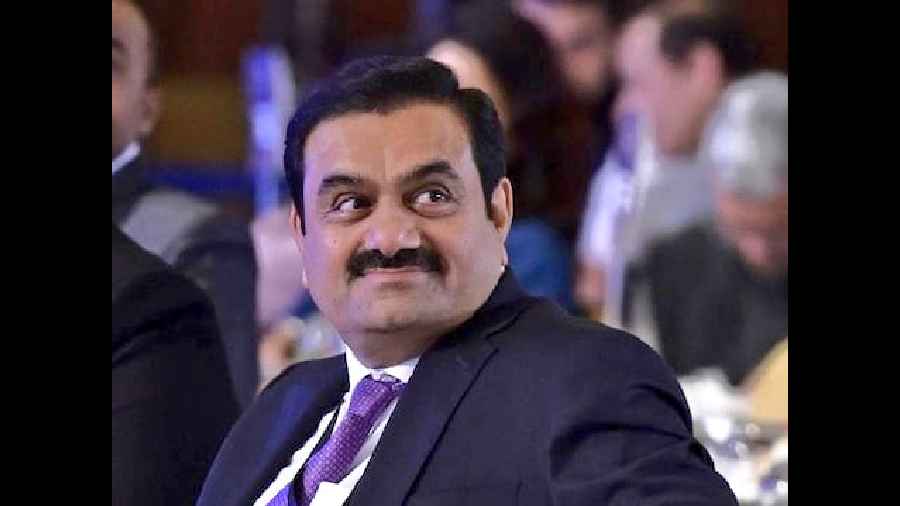 In filings to the Bombay Stock Exchange, NDTV announced that its co-founders, husband and wife Prannoy and Radhika Roy, have sold much of their stake in NDTV to one of its holding companies that the Adani Group acquired through a hostile takeover. Prior to the sale, the Adani Group company had already acquired a plurality of NDTV’s shares through this holding company, holding the single largest block of 37.45%. The Adani Group now has majority ownership, with a stake of 64.71%. The Roys have retained a combined 5% stake in the company.

In a statement released with the announcement, the Roys said that they had held discussions with Gautam Adani, the Adani Group chairman, and that ‘our discussions…have been constructive; all the suggestions we made were accepted by him positively and with openness.’

‘Mr Adani has invested in a brand that is synonymous with Trust, Credibility and Independence, and we are hopeful that he will preserve these values and expand upon them with all the responsibility required of a leader of an organisation of this nature,’ the statement continues. 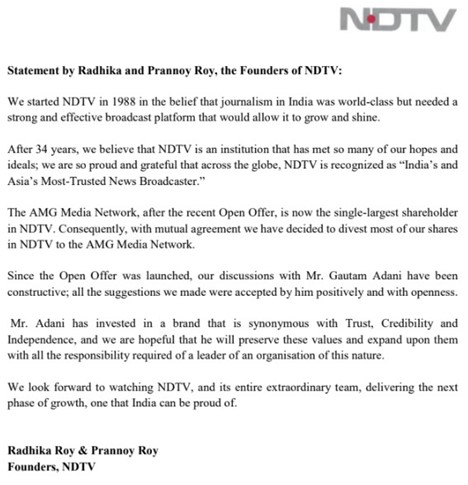 Above, Radhika and Prannoy Roy’s full statement on selling their stake in NDTV to the Adani group

Gautam Adani’s comments on the takeover

In interviews to the Financial Times (FT) and to the India Today television network, Gautam Adani elaborated on his takeover of NDTV.

He told the FT of his ambition to build a ‘global news brand’, stating that he intended to build for NDTV a ‘global footprint’ modelled on the FT or the Qatar-based broadcast network Al Jazeera. 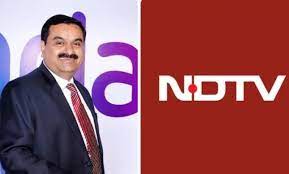 Stating that he saw the NDTV purchase as a ‘responsibility, rather than a business opportunity’ in the same interview, Adani also expounded on his views on editorial balance, stating that ‘independence means if government has done something wrong, you say it’s wrong… but at the same time, you should have courage when the government is doing the right thing every day. You have to also say that.’

Adani reiterated his position in an interview to the India Today network.

‘On editorial independence, let me say categorically that NDTV will be a credible independent global network with a clear lakshman rekha (firewall) between management and editorial,’ Mr Adani said. ‘You can endlessly debate and interpret each and every word of what I’m saying, as has been done by many, but my fundamental point is the proof of the pudding is in the eating. So please allow us some time before judging us.’

Newslaundry reported that at a town hall meeting at NDTV’s offices after the Adani takeover, Adani executives assured the news network’s staffers that they would not seek to change the kinds of stories that they seek to do, and that the ‘raw material of NDTV as a product is its credibility.’

The Adani takeover was to silence me: Ravish Kumar

In a no-holds-barred interview with The Wire, former NDTV journalist and Hindi language news anchor, Ravish Kumar, explained his views on the Adani takeover. Kumar is one of India’s most highly respected journalists; he was granted the prestigious, international Magsaysay Award in 2013 and 2017 for services to journalism. His resignation from NDTV (covered earlier by AdaniWatch) attributed the sale of NDTV to Adani to a desire to remove him from television. 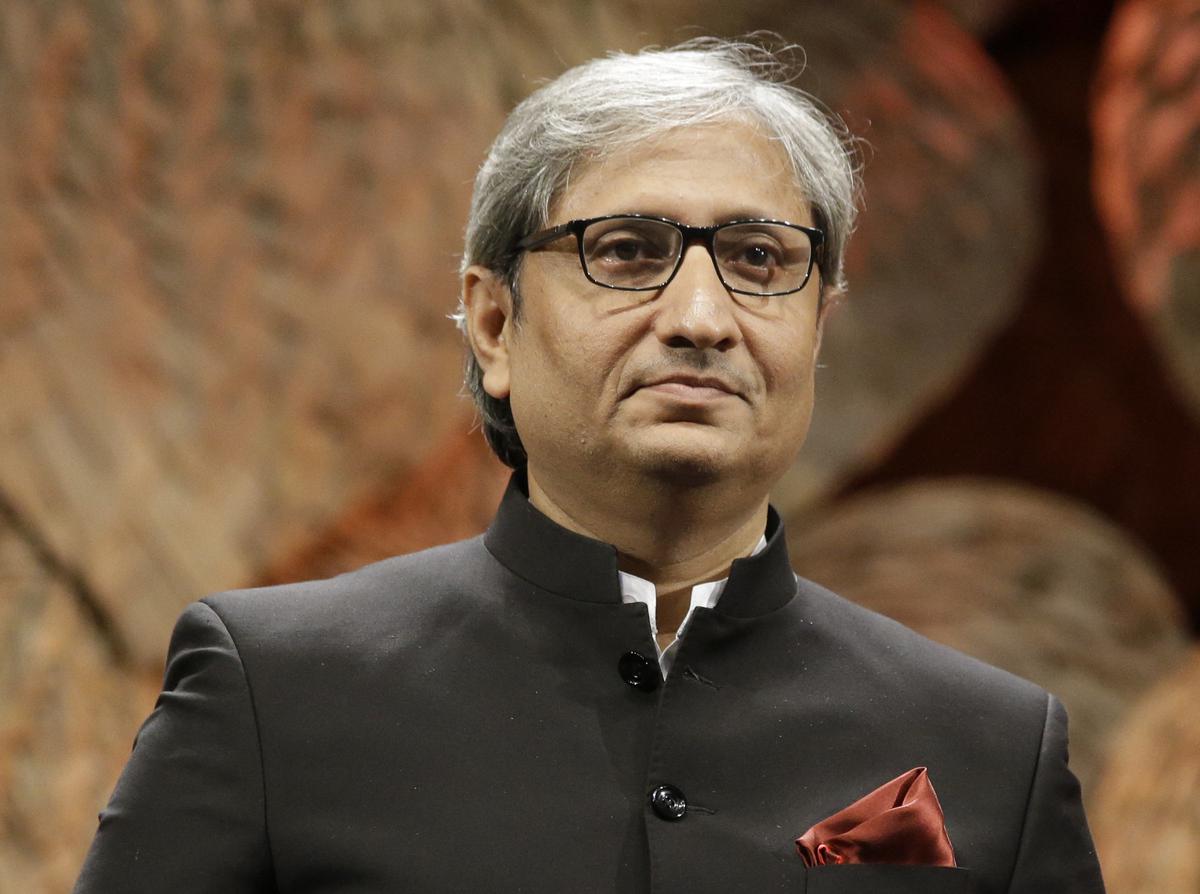 Kumar said: ‘I … am convinced that this entire scheme was hatched to remove my presence from TV … Hundreds and thousands of crores (of rupees) have been spent to render me jobless … The crux of the issue is that there is a journalist who is standing in a corner, posing questions of accountability that are well-prepared … To remove him you have placed a big wager. The problem was … not with me but with the questions I was raising and the issues of the people I was foregrounding. That platform is gone.’

Taking on Adani’s statements on editorial balance, Kumar added that ‘certainly, the government does the right thing, but if someone criticises it, that should be taken note of, too. You should have the guts to state that as well, which the godi (lapdog) media and its owners don’t have. Can Adani say this? Look at the godi media’s empire, how vast it is. Even then, Mr Adani feels that no one has the courage to praise the government. There is nothing but praise from morning to evening; the voice of the people finds no place in these channels and he is talking about courage! He who does not respond to journalists’ questions, threatens a defamation suit, gives a featured interview, is expounding on press freedom.’

Kumar, who intends to build an independent news reporting operation on YouTube, joins a growing group of experienced Indian journalists who have been forced out of the country’s largest television channels and newspapers due to their criticism of the Modi government, who now pursue their craft either independently or at small-scale digital media outlets. Kumar’s interview with The Wire was conducted by Karan Thapar, another member of this group, formerly of the television networks BBC and CNN-IBN.

A potential legal loose end left flapping in the sale of the Roys’ stake to the Adani Group was closed on 3 January 2023.

After an initial move in August to buy up the debt of, and then take over, an NDTV holding company with a 29.18% stake in NDTV, the group conducted an ‘open offer’ of NDTV shares on the stock market, buying up shares held by the public and institutional investors. This ‘open offer’ was available to shareholders from 22 November to 5 December 2022. It led to the group acquiring a further 8.27% stake in NDTV at the price of Rs 294 per share (approximately US $3.50).

The Roys’ stake, however, was bought at the premium rate of Rs 342.65 per share. Indian market regulations required that Adani match the price offered to the Roys and pay the same rate to the sellers of NDTV shares in the open offer. On 3 January, the Adani Group said it would do this, promising to pay an additional Rs 48.65 per share over the open offer’s price.

The author is an independent journalist based in New Delhi.