Bob Brown today slammed billionaire Gautam Adani for his attack on freedom of speech in India and Australia. The criticism followed the revelation today that veteran Indian journalist, Paranjoy Guha Thakurta, has been the subject of an Adani gag order for four months.

Yesterday it was reported that Paranjoy was the subject of an arrest warrant issued by a court in Mundra, the Indian city in which Adani’s largest container port is located. The arrest warrant arises from a 2017 SLAPP suit in which Adani alleges that he was defamed by Paranjoy. The SLAPP suit refers to a story describing a $100-million ‘bonanza’ for Adani as a result of a decision by India’s Modi government.

Today it has been revealed that Paranjoy has been subjected to a gag order arising from yet another case initiated by Adani. A court in Ahmedabad, capital of Adani’s home state of Gujarat, agreed in September 2020 to an interim injunction sought by an Adani company preventing Paranjoy from reporting on the Adani Group.

‘Adani has piled one case after another on Paranjoy in an attempt to silence him,’ said Dr Brown. ‘The courts in Adani’s home state of Gujarat have complied, issuing a gag order and an arrest warrant. This behaviour is more that of a police state than what you would expect in a proud democracy like India.’

The injunction also applied to Paranjoy’s colleague, Abir Dasgupta, a frequent contributor to AdaniWatch, and to NewsClick, the outlet in which the pertinent stories were published.

AdaniWatch investigator, Geoff Law, warned of the dangers to the public’s right to know about the activities of such a massive corporation.

‘The same repression is infecting Australia where Adani has already used ‘attack dog’ lawyers and moved to repress critics such as BBF Environmentalist of the Year Ben Pennings,’ Mr Law said. ‘Adani’s actions are a serious threat to free speech in at least two countries.’

The stories described Supreme Court decisions favourable to the Adani Group made by India’s Supreme Court. Adani claimed that the reports were libellous and mounted a case of criminal defamation. Proceedings have yet to commence in the case, but in the meantime, Paranjoy, NewClick and Abir Dasgupta are restricted from reporting on the Adani Group.

NewsClick editor, Prabir Parakayastha, speaking to ,newslaundry said ‘the way it’s construed, it’s a blanket bar that we are not supposed to write anything on Adani. And because Adani’s is one of the major companies in the country, asking us not to write about them is restraining freedom of speech.’

Court documents (the third one, Exh. 14 contains the gag order) follow the flip:

Court documents (the third one, Exh. 14 contains the gag order): 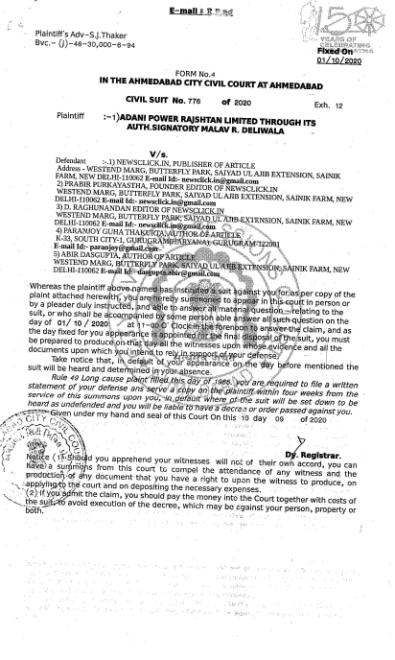 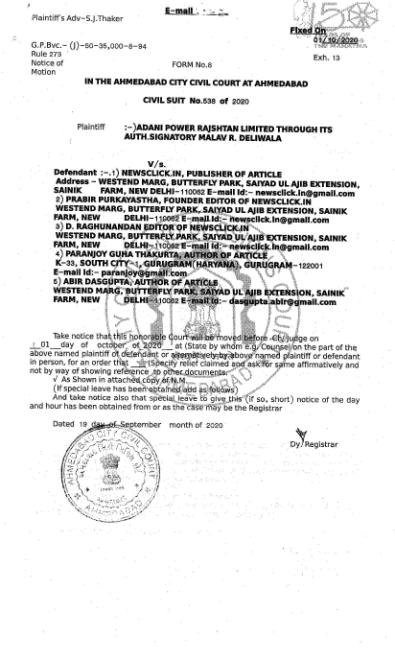 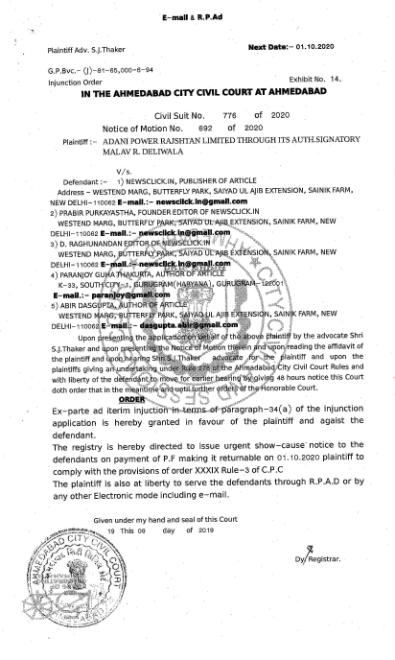