AdaniWatch has previously reported on the cascading impacts of Adani’s massive Vizhinjam port project in the southern Indian state of Kerala. The 3.1-km breakwater requires millions of tonnes of rock to be excavated from proliferating quarries in the lush hinterland. In this story, the impacts of a quarry proposed by Adani are examined, with experts warning that the environmental disruption will aggravate deadly human-wildlife conflicts in the area.

Despite human-animal conflicts on the rise in the Indian state of Kerala, the state government has approved a proposal by an Adani Group subsidiary to extract granite from an ecologically fragile area – much to the chagrin of conservationists. The proposed project site, located close to two wildlife sanctuaries, threatens the rich biodiversity of the area including several species of flora and fauna. 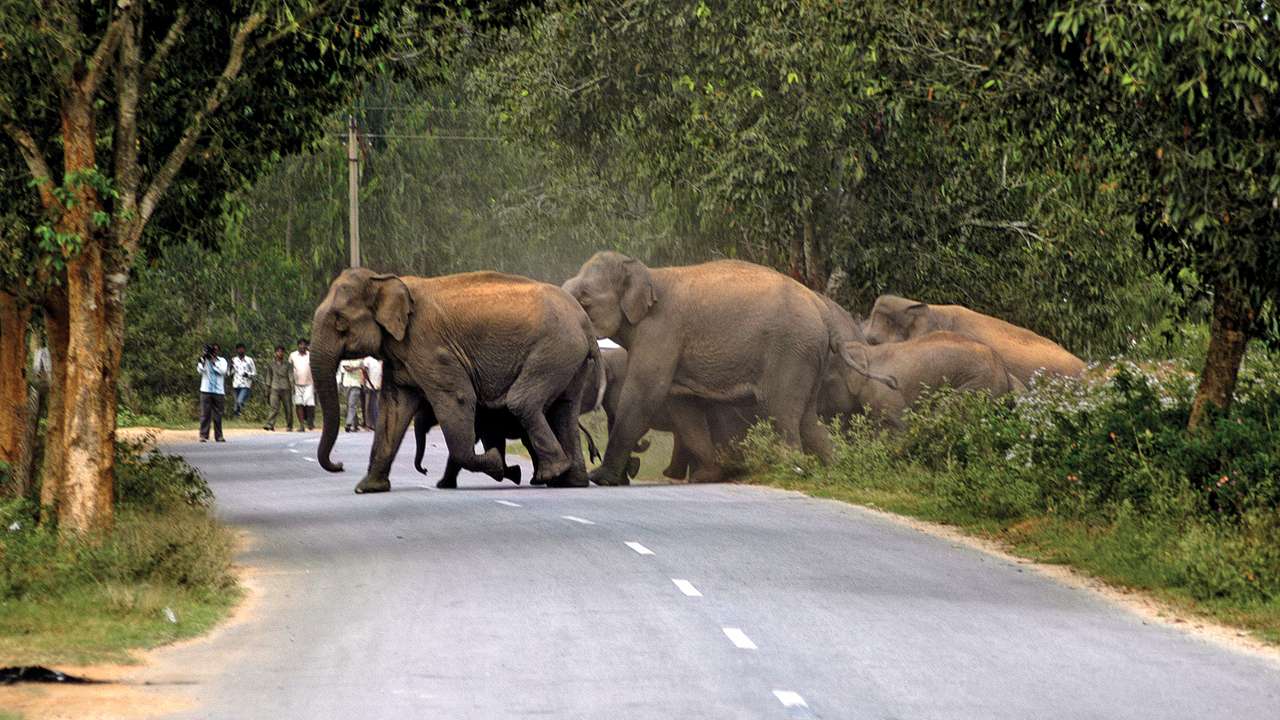 The project site near Aryanadu, where granite will be extracted by Adani Vizhinjam Port Private Limited using the opencast mining method, is spread over an area measuring 1.9 hectares. It is located 5.1 km from the Peppara Wildlife Sanctuary and 6.8 km from the Neyyar Wildlife Sanctuary in the Thiruvananthapuram district of Kerala. India’s union government is yet to notify eco-sensitive zones of these two sanctuaries. An order by India’s Supreme Court in 2006 set the default buffer zone of these two sanctuaries at 10 km each.

Opencast mining activities, involving blasting and use of heavy equipment, say experts, are bound to disturb wildlife and movement of animals in the region resulting in an increase in human-wildlife conflict. 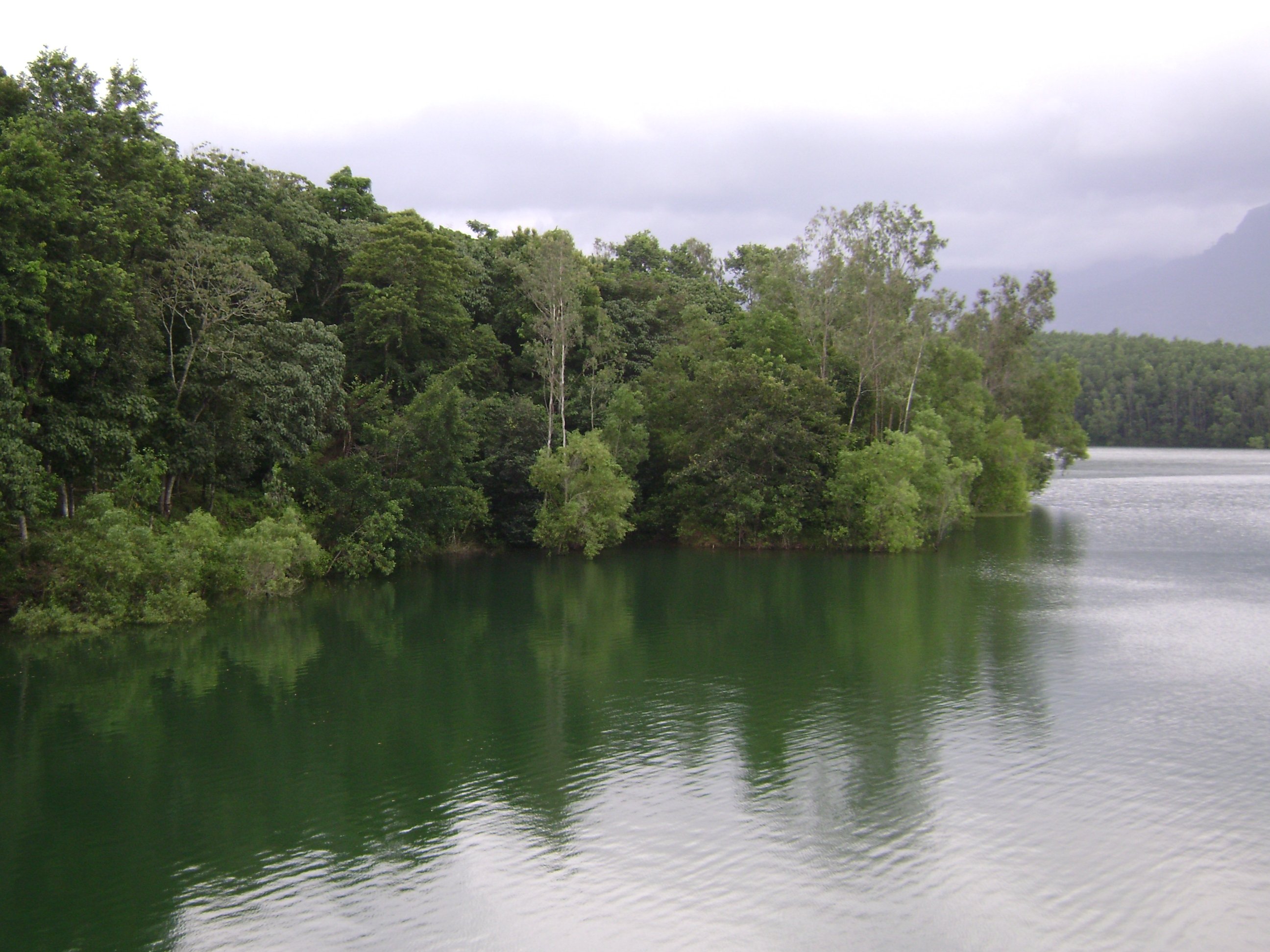 The Neyyar Wildlife Sanctuary is located around 32 km from Thiruvananthapuram and is spread across 12,000 hectares of natural vegetation. It boasts a deer park, a lion safari park and a centre for crocodile rehabilitation and research. The sanctuary is the habitat of over a hundred species of fauna including the Asian elephant, tiger, leopard, slender loris and reptiles such as the king cobra and the Travancore tortoise. Herds of elephants, gaur, sambar, barking dee, and wild boar can be seen in the Peppara Wildlife Sanctuary. Endemic species such as the Malabar grey hornbill, white-bellied treepi and the small sunbird have also been seen here.

As per the plan of the project proponent, semi-mechanised opencast mining involving blasting and drilling will be undertaken at the quarry site near Aryanadu. These activities will pose a direct threat to wildlife within the wildlife sanctuaries apart from hampering their movement in the eco-sensitive zones.

Eco-sensitive zones in India are areas within a 10-km radius of national parks and wildlife sanctuaries, where activities such as mining are either prohibited or strictly regulated.

‘The opencast mining method has deep negative impacts on local ecology and the environment,’ said Rebbapragada Ravi, Chairperson of mines, minerals and PEOPLE (mm&P), an alliance of individuals and communities affected by mining. 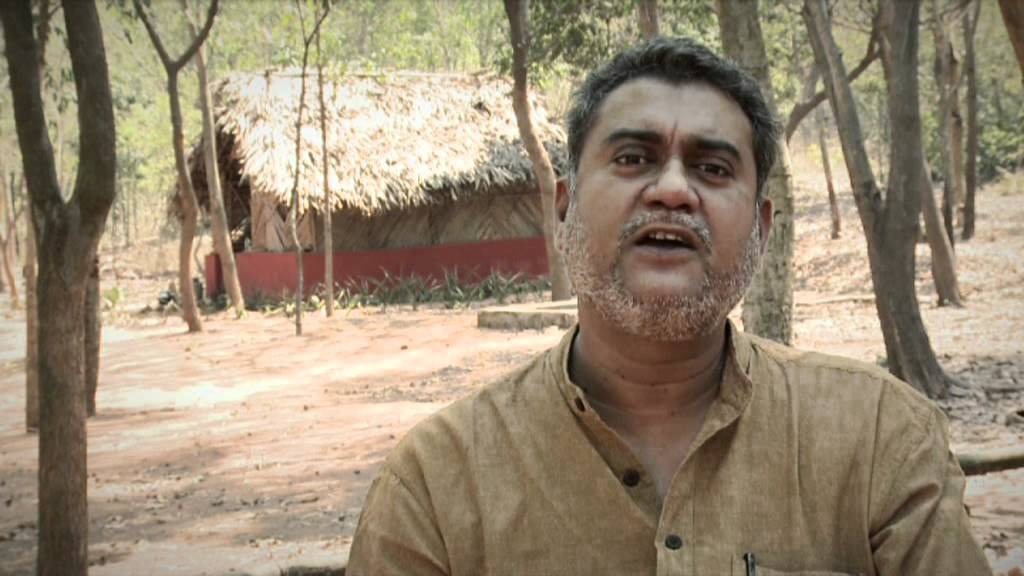 ‘The hydrological and geological conditions of the area are affected by this method of mining. Atmospheric and soil conditions of local areas are also affected. Mining is bound to cause a negative impact on the flora and fauna of the two wildlife sanctuaries that are in close proximity to the project site. Dust and noise from opencast mining will adversely impact wildlife in the area. It will also result in changes to the movements of animals, bringing them into greater conflict with humans,’ he said.

In its latest meeting, the minutes of which were released on 8 October 2021, the Standing Committee of India’s National Board for Wildlife (NBWL), a statutory central government agency for wildlife conservation, deferred its decision on the mining proposal. The Board asked the Kerala government to provide details of mitigation measures that have been planned in lieu of the approval for granite mining in the area.

‘The area falls within a default Eco-Sensitive Zone. The proposed quarry area is situated at an aerial distance of 5.12 km from Peppara Wildlife sanctuary and 6.76 km from Neyyar Wildlife sanctuary. The Chief Wildlife Warden, Kerala, has recommended the proposal with the following condition that an amount of Rs.10 lakh (US $13,400) shall be contributed towards mitigation of human-wildlife conflict by the project proponent. The Standing Committee desired to know the details of mitigation measures to be taken by the Forest Department using this amount,’ states the Board’s minutes of meeting. 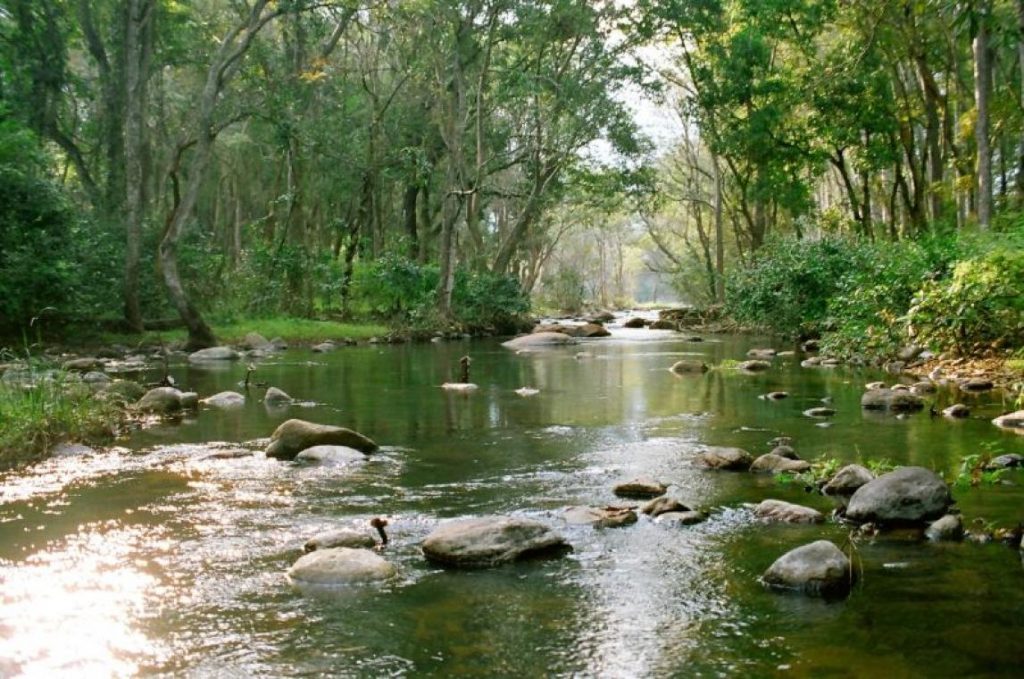 In January this year, the Kerala government had decided to impose the recommended sum of Rs 10 lakh as a mitigation surcharge upon the project proponent against approval for the project. No response has been received by this correspondent from the Adani Group to the question of whether a larger budget will be allocated for wildlife mitigation measures near the proposed mining site.

‘The basis on which the Kerala government has arrived at a sum of Rs 10 lakh as mitigation surcharge is not known. As a matter of fact, no amount of surcharge will be enough to mitigate permanent damages caused to ecology and wildlife through aggressive mining practices,’ said Ravi.

A questionnaire has been emailed to the Chief Wildlife Warden of Kerala, Bennichen Thomas, asking, amongst other queries, for details of the basis on which a mitigation surcharge of Rs 10 lakh was calculated. He has also been asked to provide details of the state government’s mitigation plan. No responses had been received to the queries at the time that this article was published. Repeated calls made to Thomas, who is also Kerala’s Principal Chief Conservator of Forests (Wildlife), went unanswered.

The Kerala State Board for Wildlife (SBWL), in a meeting held on 18 January 2021, took cognizance of the threat posed by the mining project to the wildlife and ecology of the region but approved it nevertheless, apparently on the grounds that it concerns Adani’s Vizhanjam Port which is a ‘dream project’ for the state.

‘In Kerala, human-animal conflict is on increase and the wild animals are straying out of the forests very frequently, sometimes even up to 10-15 km from forest area. The existence of quarries in these areas is going to only aggravate the already worsening human-wildlife conflict. In these circumstances, the Member Secretary [of the SBWL] proposed that wildlife approval can be recommended with the condition that the quarry should contribute Rs. 10.00 lakh which will be used for mitigation of human-wildlife conflict,’ states the SBWL’s minutes of meeting.

As per details of the minutes of meeting of SBWL, the fund of Rs 10 lakhs is likely to be utilised for strengthening Rapid Response Teams (RRTs) by providing new customized vehicles and establishing veterinary units for better care of wild animals captured in conflicts. 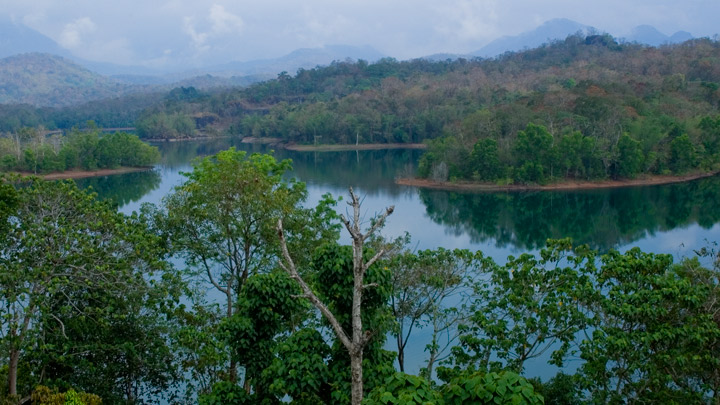 As per the Kerala Economic Review 2020, a document (Refer Table 3.6.1, Page 147) published annually by the state’s Planning Department, 6662 incidents of human-animal conflicts were reported in the year 2019-20 alone. These incidents resulted in the deaths of 92 people and injuries to an estimated 699 more. The maximum number of incidents (2895 cases) pertained to elephant attacks. The number of human-animal conflicts reported were 7890 and 7229 for the years 2018-19 and 2017-18, respectively.

Apart from elephants, both the Peppara Wildlife Sanctuary and the Neyyar Wildlife Sanctuary are home to a number of tigers, leopards, sloth bears and the rare barking deer. Experts say a cumulative environment impact assessment of the mining project is required before giving it a go-ahead because it is proposed to be located in an area where default eco-sensitive zones of two protected areas overlap.

Dr M Shaji, an expert on Kerala’s wildlife, said the two wildlife sanctuaries are located at the tail end of the Western Ghats – a chain of mountains traversing a distance of around 1600 kms from Gujarat to Kerala along the western coast of India – part of which has been recognized by UNESCO in its World Heritage List.

‘These two protected areas are, in fact, part of one continuous stretch of forests with a few human settlements in between. But most incidents of human-animal conflicts are reported from Wayanad district in the north of Kerala while those in Thiruvananthapuram district in the south are very few. To date, there have been no studies on the impact of quarrying activities on the increase in human-animal conflicts in Kerala. As far as the Kerala state government is concerned, it is compelled to take up economic activities like mining in order to reduce dependency on other states,’ said Dr Shaji, who is also an Assistant Professor in the Department of Wildlife Science, Kerala Agricultural University.

Notwithstanding concerns of conservationists over the perceived threat to wildlife from the mining project, legal experts say very little can be done to prohibit mining activities within default eco-sensitive zones of protected areas. In an order (Refer Para 1.4.2) issued in December 2006, the Supreme Court directed that all projects which need an environment impact assessment and which also fall within default eco-sensitive zones of protected areas are to be referred to the NBWL’s standing committee for approval.

Though the two wildlife sanctuaries are protected under India’s Wildlife (Protection) Act, 1972, their default eco-sensitive zones do not enjoy secure legal protection.

‘As far as eco-sensitive zones are concerned, mining projects can be prohibited only if they fall within a 1-km radius of a protected area. The Wildlife (Protection) Act, 1972 allows only those activities within a protected area which are beneficial to wildlife. But there is no mention of eco-sensitive zones within the Act,’ said Delhi-based environmental lawyer Ritwick Dutta.