Ayaskant Das Jan 10, 2022
Adani penalised for environmental violations at Talabira I mine, Odisha

In December 2021, India’s national environmental watchdog fined an Adani subsidiary for its part in the mismanagement of the overburden from a coal mine in the eastern Indian state of Odisha. A huge dump of mined materials encroached on to adjacent farmland. Polluted water leached from the dumps, contaminating watercourses and land used for cropping. Adani’s financial liability for the now disused mine could increase dramatically once an expert panel releases its findings on the amount of money required for compensation of landowners and proper rehabilitation of the land.

The Adani Group has been penalised Rs 2.5 crore (AUD $ 461,789) for violating environmental rules at the Talabira I open-cast coal mine in the eastern Indian state of Odisha. The penalty was issued by the Eastern Zone bench of National Green Tribunal (‘the tribunal’), which is India’s premier court on environmental issues, in an order issued on 8 December 2021. 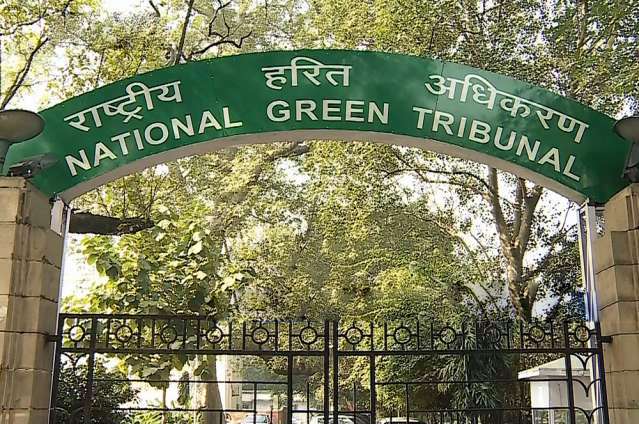 The tribunal also imposed a penalty of Rs 7.5 crore (AUD $ 1,385,928 approximately) upon Aditya Birla Group’s Hindalco Industries Limited, the company which developed and operated the mine until it was acquired by another entity that Adani, in turn, took over in 2019. The mine is not currently operational.

These penalties have been awarded on an interim basis and could increase substantially after analysis by a six-member expert panel constituted by the tribunal to examine the details of the violations. The verdict has been covered by Indian media. 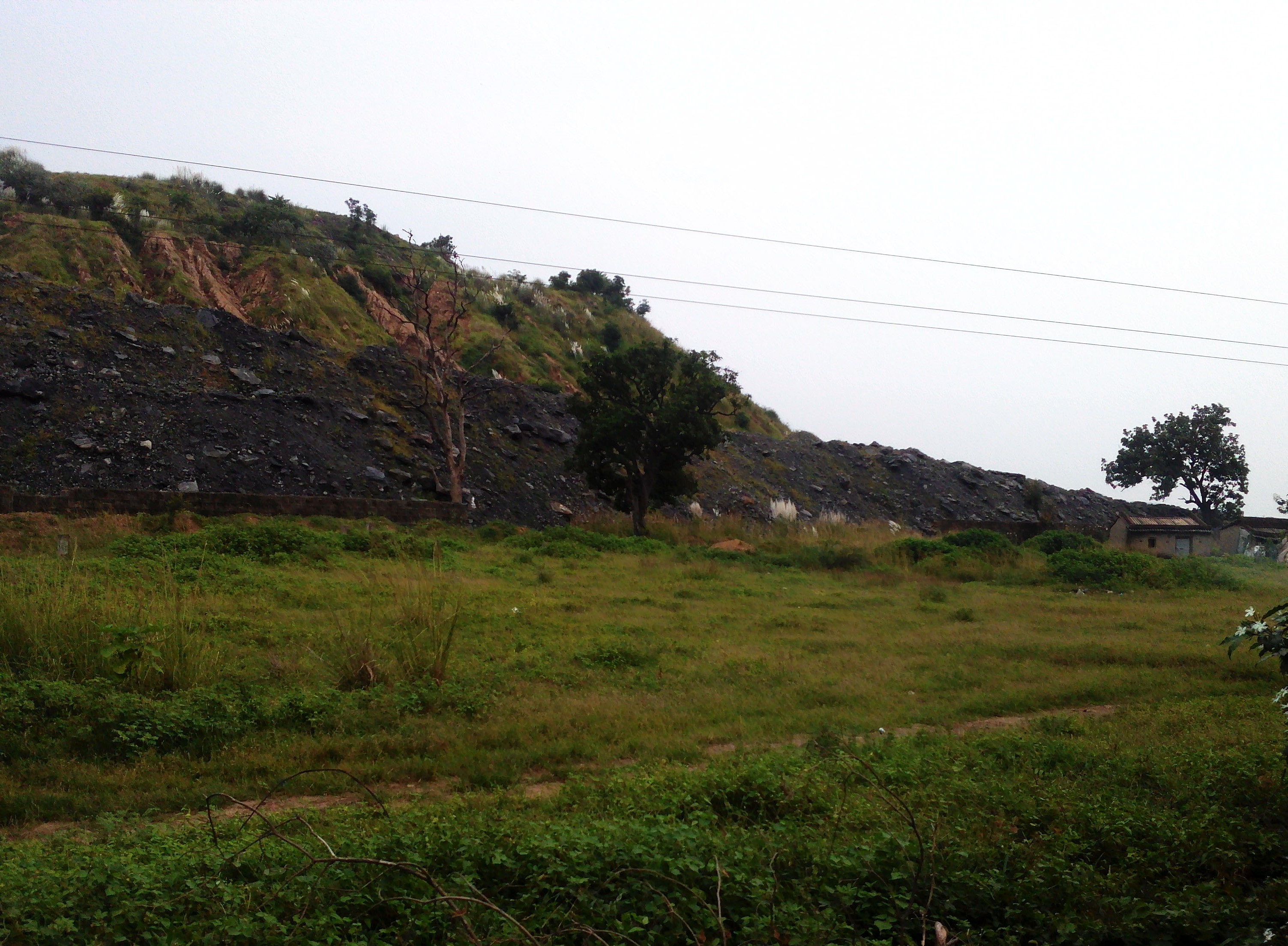 The penalties were issued because Hindalco had resorted to indiscriminate disposal of overburden; the Adani Group subsidiary Raipur Energen Limited (REL) was complicit through inadequate upkeeping of the dumps after it took over the operation. The dumps encroached on to private land, with polluted waters leaching into the local environment.

In 1994, the coal block was allotted to the Indian Aluminum Company Limited – which was subsequently acquired by Hindalco Industries. The first Environmental Clearance (EC) was granted to Hindalco on 5 March 2001 for a production capacity of 0.4 MTPA. New ECs were subsequently issued on 14 January 2009 and 8 November 2011 for expansion in production to 1.5 MTPA and 3 MTPA respectively. 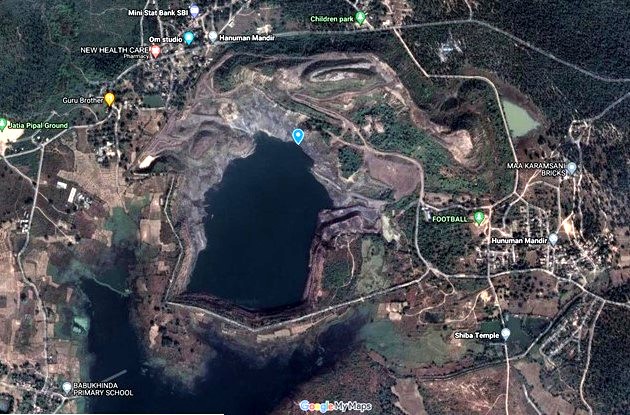 In a landmark verdict issued on 24 September 2014, the Supreme Court cancelled allotments of 214 coal blocks across India. This included Talabira I in Odisha. In an auction of the cancelled coal blocks conducted by the Modi government in February 2015, the coal block was allocated to GMR Chhattisgarh Energy Limited and the EC for 3 MTPA production was transferred accordingly. The ownership of Talabira I coal block then passed into the hands of the Adani Group after its takeover of GMR Chhattisgarh Energy Limited in August 2019. The firm subsequently changed its name to Raipur Energen Limited (REL).

‘Having regard to the fact that OB [over-burden] dumps were first created by Hindalco and dumping was done beyond the designated dump sites as found during inspection by the MoEF&CC [Union Ministry of Environment, Forests & Climate Change], primary liability is of Hindalco but once lease was taken over by REL, it remained under an obligation to comply with the EC [Environmental Clearance] conditions and to manage the overburden consistent with environmental norms and obligations. We accordingly apportion the liability between Hindalco and REL in the ratio of 75:25 percent,’ a five-judge special bench of the tribunal ordered in its judgment.

(The story continues below)

Mining at Talabira I block stopped in April 2018 following expiry of the approved mining plan. The amount collected in interim penalties will be kept in a separate account by the Odisha State Pollution Control Board to be utilised in accordance with final recommendations of the expert panel. The bench, headed by the tribunal’s Chairperson Adarsh Kumar Goel, further ordered: ‘Compensation for past damage to environment due to the violation and the cost of remediation have to be worked out.’

The six-member expert panel constituted by the tribunal to recommend appropriate compensation and remediation for damage to the environment will be headed by the Regional Officer of MoEF&CC in Bhubaneshwar, the state capital of Odisha. The Talabira I coal block is located in Khinda village under the Rengali tehsil (an administrative sub-division) in the Sambalpur district of Odisha.

In the petition to the tribunal filed by Manbodh Biswal, a resident of Khinda village, it was alleged that the project proponent had dumped overburden on privately-owned farmlands without ever bothering to acquire those lands or paying compensation to the owners. 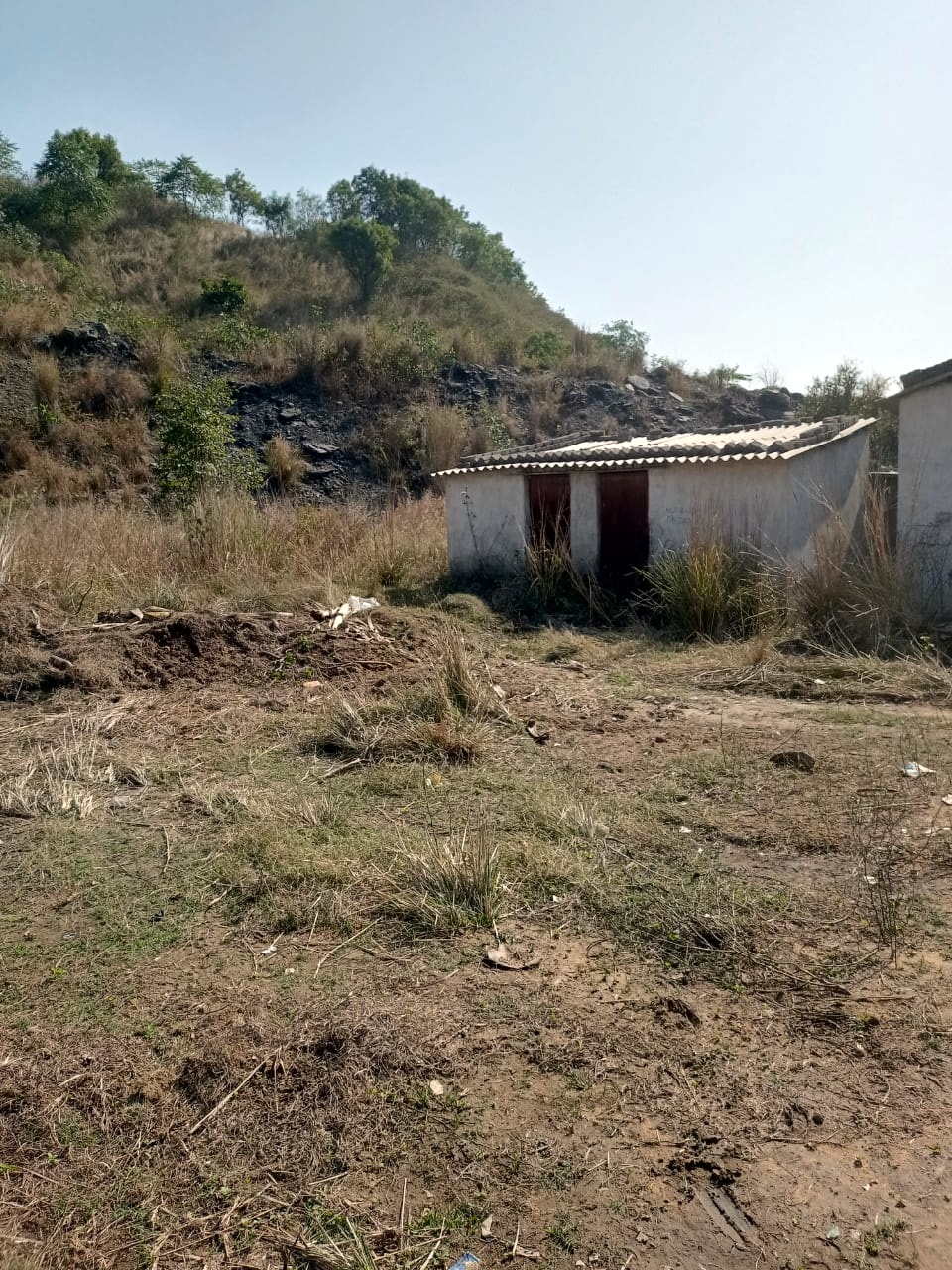 ‘These lands have been lying barren for more than a decade now. Water bodies became contaminated from the overburden. No green belt was ever developed by the project proponent on the periphery of the mining-lease area. It resulted in large-scale air pollution from fugitive dust.’

‘These lands used to be double-cropped; farmers used to sow rabi (cereals such as wheat) as well as kharif (monsoonal crops such as rice and pumpkin). But these industrial activities led to loss of livelihood for local farmers since agriculture can no longer be carried out on these lands.’ 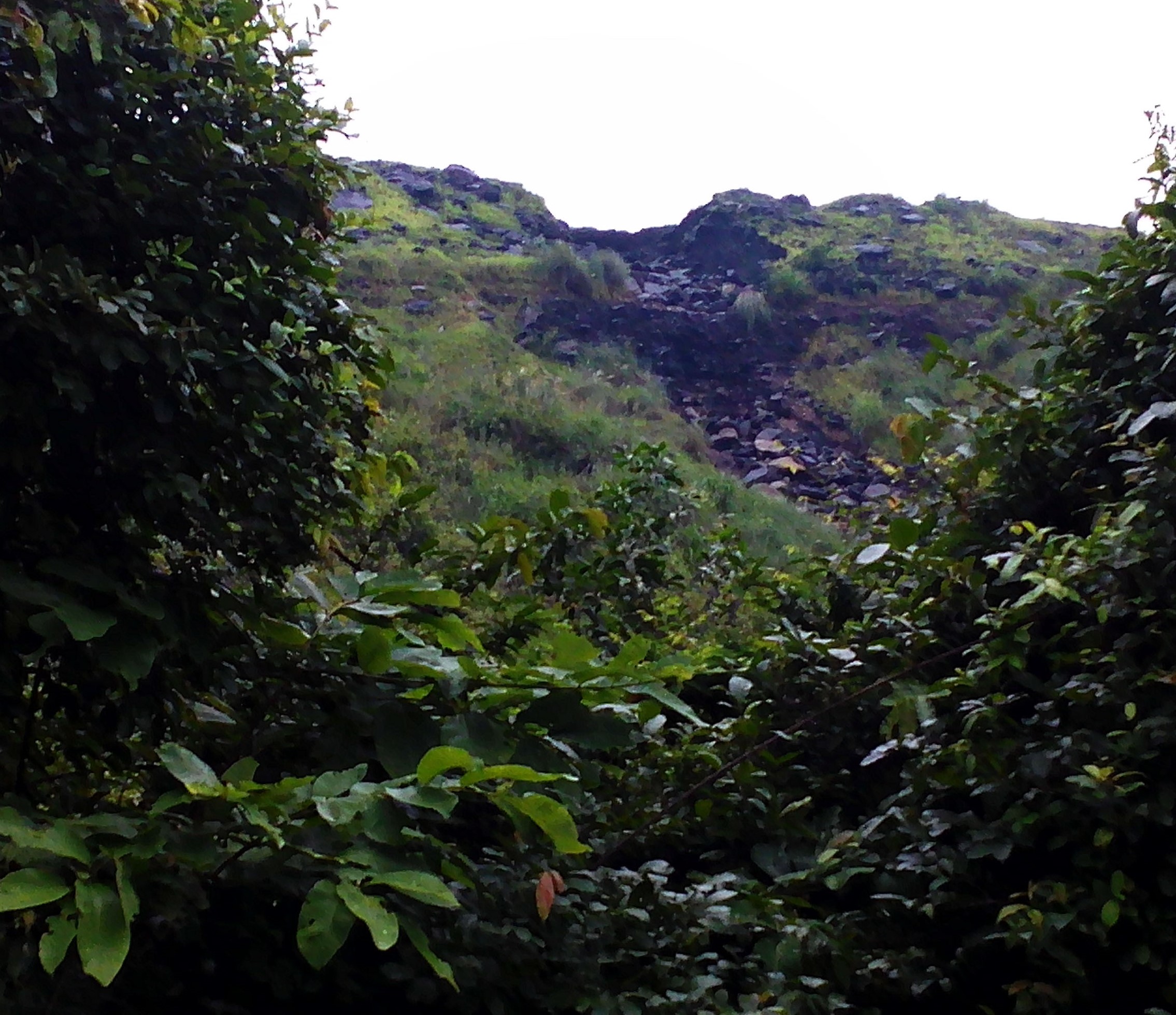 Upon the directions of the tribunal, a site inspection was conducted on 19 September 2019 through the MoEF&CC’s Bhubaneshwar regional office. It revealed major lapses on the part of the project proponent in the maintenance of the overburden. The inspection team found three external overburden dumps which had a volume of around 15 million cubic meters and had been spread over an area of 36 hectares.

‘The PP [Project Proponent] has only stabilised the overburden dumps through plantation,’ the MoEF&CC stated in its report. ‘At dump No. 2, no benching has been made, as a result of which steep slopes have made soil erosion.’

‘There is still reserve of 7.12 MT of coal available in the mine for which Revised Mining Plan is to be submitted. Plantation over the overburden dumps, and back-filled area, which are to be carried out, are yet to be made.’

In Biswal’s petition, it was alleged that mining overburden had been dumped on around 4.5 hectares of privately-owned land belonging to at least six farmers. Biswal further alleged that officials of the Odisha government and MoEF&CC had failed to take action against excessive production by Hindalco Industries that allegedly occurred in the period 2003 to 2014. 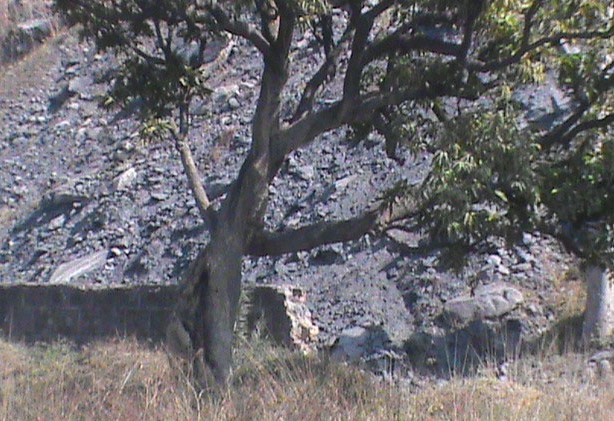 In its defence, the Adani Group subsidiary told the tribunal that it had tried to rectify the non-compliances committed by Hindalco Industries. It claimed that overburden dumps created by the previous owners were stabilised with the help of plantations: nearly 23,000 tree saplings were planted from 2015 to 2018. It further claimed that an additional 37,940 saplings were planted and that a green belt was established after 2016. The Adani Group claimed that these measures had biologically reclaimed 14 hectares from the 31 hectares of over-burden dumps. It also claimed not to have deposited further overburden on the dumps it had acquired.

During the hearing, REL argued that it should not be held liable for violations committed by the previous allottee of the coal block, citing Section 14 (3) of the Coal Mines (Special Provisions) Act, 2015. But the tribunal, nevertheless, held REL guilty of violating the terms and conditions of the Environmental Clearance dated 8 November 2011. This EC had been transferred by the MoEF&CC from Hindalco to GMR Chhattisgarh to REL, part of the Adani Group.

The Ib Valley Coalfield of Odisha, where Talabira I block is located, has been classified as a ‘critically polluted industrial cluster’ by the Central Pollution Control Board, a statutory body under the MoEF&CC. 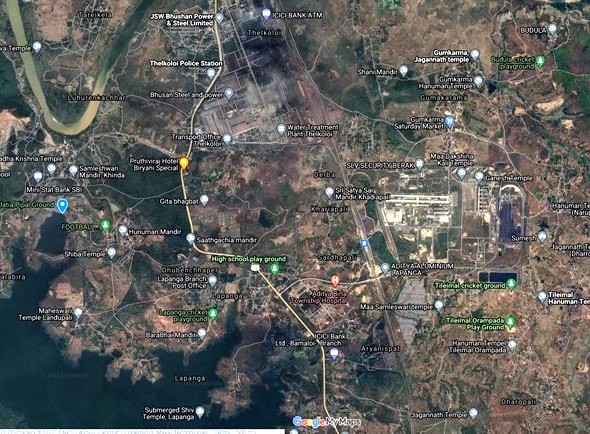 ‘Since the coal block is located in a critically polluted area, the project proponents were required to be extra careful as far as safeguarding the environment is concerned. The project proponent had, however, carried out mining in such a manner that had led to greater emission of airborne pollutants in the region. The coal mine was never filled up progressively in accordance with the approved mine-closure plan. Site visits conducted by Odisha State Pollution Control Board in the year 2013 had revealed pollutants beyond permissible limits in water samples and air samples from the area while roads meant for transporting the mineral had been poorly maintained thereby adding to air pollution from fugitive dust. Even mining was being undertaken below the groundwater level,’ legal counsel for the petitioner, Saurabh Sharma, told AdaniWatch.

Questionnaires were emailed to Hindalco and the Adani Group separately by this correspondent asking why the extracted overburden had not been maintained in accordance with the stipulated conditions. No responses had been received from either party at the time of publication.