Adani - the company that dare not speak its name

Adani boasts that work on its Carmichael coal mine in Queensland is ‘well underway’, but the company’s behaviour betrays an attitude of deep insecurity.

In August 2020, Adani Australia launched legal proceedings against climate campaigner Ben Pennings, alleging ‘a sustained campaign of harassment’ against the company’s business and contractors. Mr Pennings was the public face of Galilee Blockade, a community group dedicated to keeping the fossil fuels of Queensland’s vast Galilee Basin in the ground in order to protect the Earth’s climate.

In preparing for the court action, Adani secretly sought to raid the Brisbane home of Mr Pennings and his young family in order to obtain ‘confidential information’ it believed Mr Pennings had acquired. The court dismissed Adani’s move, citing the ‘humiliation and family distress’ such a raid might cause.

On 28 October 2020, it was revealed that Adani had organised surveillance of the home and family of Mr Pennings. A private investigator engaged by Adani covertly took photographs of Mr Pennings walking his nine-year-old daughter to school. Adani confirmed that surveillance had taken place, saying in a statement on Twitter that ‘any surveillance activity related to the relatives of Mr Pennings was an effort to determine the time of day to carry out a search order that would see the least disruption to residents, if it was granted by the courts’.

In September, Mr Pennings had offered to remove posts pertaining to Adani’s operations if the company dropped its lawsuit against him. Nevertheless, Adani continued the case and, on 11 September, obtained an injunction against the use of ‘confidential material’ in media posts. Mr Pennings said that the Adani Group ‘is determined to make my family suffer as a message to other concerned citizens’. He is now focussing on the court case to protect his home and family and has launched an online crowd-funding appeal to help meet his legal costs.

Adani’s court actions have been described as its ‘attack dog legal strategy’ and have generated fears about freedom of speech in Australia. Concerns have been raised that journalists could be dragged into the courts by Adani. This followed criticism of the ABC for pulling a story after an Adani spokesperson rang the ABC’s news director. The corporate giant has also taken to social media to pressure the ABC and the Sydney Morning Herald. Adani has been criticised by the Media Entertainment and Arts Alliance (MEAA) for targeting journalists and attempting to use litigation to shut down media coverage of critical issues. 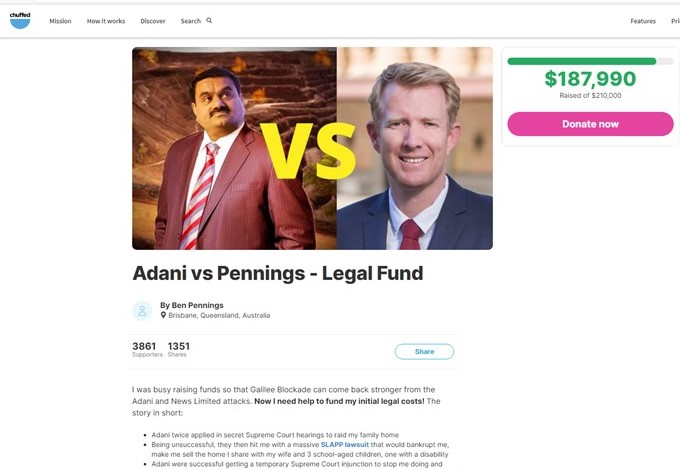 The company’s aggressive attitude towards protest and the press in Australia seems to stem from a deep-seated fear of criticism. Is it because the Adani Group has become accustomed to always getting its own way in India? The group’s founder, Gautam Adani, is often described as India’s second richest person. His close personal link to Prime Minister Narendra Modi has become a thing of great notoriety.

The power of the Adani Group in India seems to transcend politics. Even the country’s Supreme Court has been reported as consistently delivering verdicts that favour Adani. On 31 August 2020, a Supreme Court bench approved the awarding of ‘compensatory tariffs’ amounting to AUD$ 1.6 billion to Adani Power by other companies in the electricity business. One headline described this as a ‘final gift’ to Adani by a retiring Supreme Court judge. According to independent outlet NewsClick, this was the seventh favourable result for the Adani Group out of nine cases heard by this particular judge.

Meanwhile, the company has removed the word ‘Adani’ from the names of two of its own businesses in Australia. What used to be the Adani Abbot Point Terminal in north Queensland has now been renamed the North Queensland Export Terminal (NQXT). All mention of the Adani Group has been expunged from the coal port’s website other than in the biographies of its senior officers. Even the word ‘coal’ has become too hot to handle, with the terminal’s business described as pertaining to ‘resource production’ or ‘product’.

Spurned by other coal transport companies, Adani has been forced to launch its own rail business to carry its Carmichael coal to Abbot Point. The Bowen Rail Company’s website makes no mention of its parent company, Adani Ports and Special Economic Zone, and eschews the dirty word ‘coal’.

Clearly, the behaviour of the Adani Group has rendered its brand a toxic one in Australia. Adani has become the company that dare not speak its name. 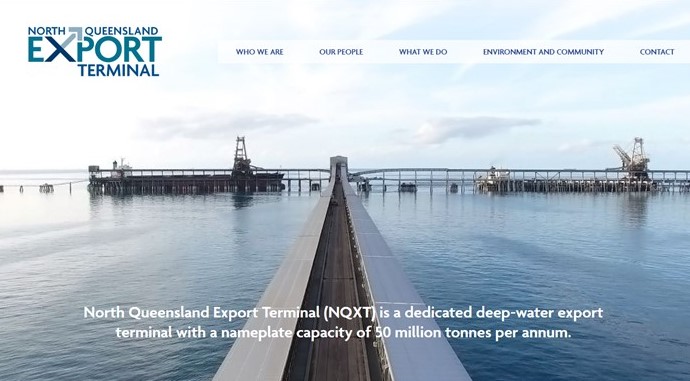