Adani’s developing mega-port in the south-western Indian state of Kerala is disrupting the lives of the local people in ever-expanding circles of impact. AdaniWatch has already reported on the destruction of fisheries, the collapse of coastal dwellings into the sea, and the quarries eating away at the hinterland. Now, hundreds of people are to be dispossessed by an arterial road that will carve its way from Adani’s port through a rural setting of lush vegetation, traditional dwellings, winding lanes and ancient trees. The people are protesting.

In Kerala, the state and national governments are planning to carve a massive ring road to facilitate smooth transportation of goods from Adani’s Vizhinjam mega-port around the state capital to other centres. The project comprises a logistics hub and a six-lane highway surrounded by a growth corridor. This will result in a multi-billion-dollar real-estate bonanza for the likes of Adani. 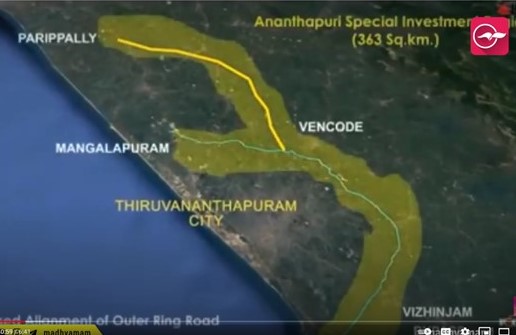 The growth corridor passes through a verdant rural area of gardens, crops, villages, pathways, shade trees and country roads. A hub will be built in Mangalapuram village. But the villagers have declared that they won’t give up an inch of their land for Adani. Several other villages have declared the same. Residents of Karod village have passed a resolution on this issue and submitted it to the government. Over 1000 people from 170 families are facing eviction. 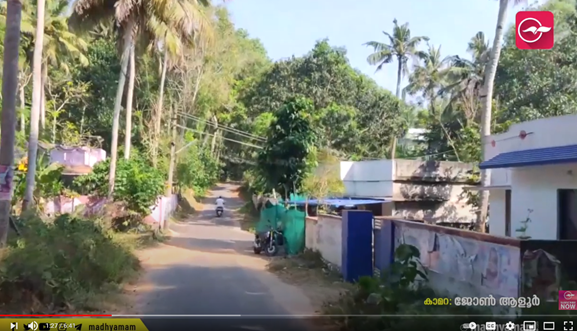 The government will take over 405 hectares of land for this project. State Finance Minister, Dr Thomas Issac, said that a company will be formed under the executive agency - Capital Region Development Programme II. A master development plan is being prepared.

In November, AdaniWatch reported on the collapse of houses into the sea as a result of coastal erosion that some have blamed on Adani. In March 2021, a season of relatively calm seas, 60 metres of the Vizhinjam port breakwater were destroyed by waves. The residents of villages to the north of the breakwater are now bracing for heavy damage to their houses. 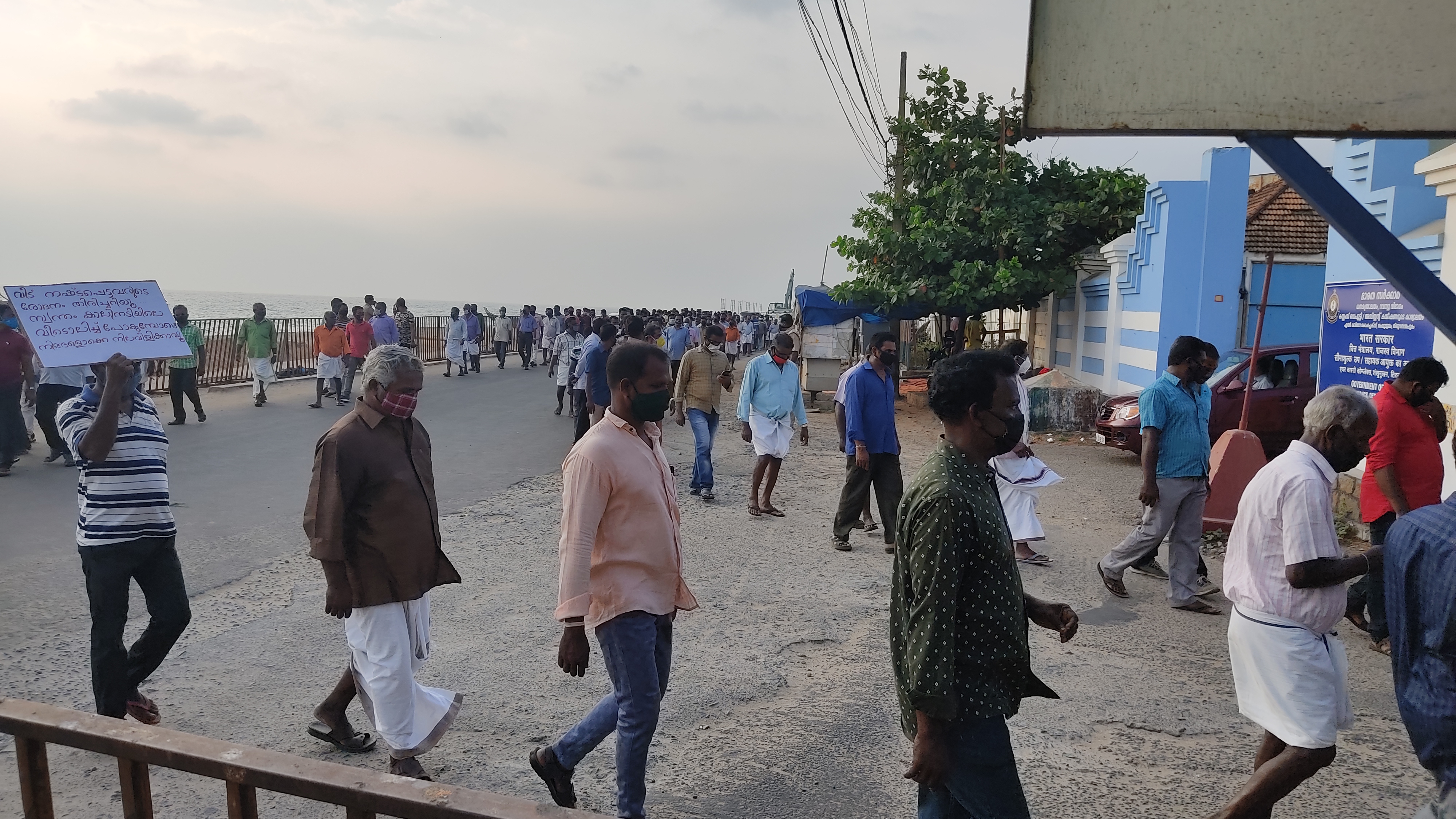 In response, a huge protest occurred at the Veliyathura fishing village called for better safety measures to prevent villagers from having to relocate to refugee camps. There was a huge rally one day and on the next, 10 March 2021, a group of women tried to commit suicide by jumping off the sea bridge. Police had to remove them from the scene to prevent mishaps. Such scenes indicate the growing desperation of local people.

As a temporary measure, the government promised to build sea walls with rocks to protect the houses. After the protest, an excavator carried out some initial work as part of the government's response.

Adani refutes claims that its port development has caused the erosion, saying that scientific reports have cleared the company of responsibility. 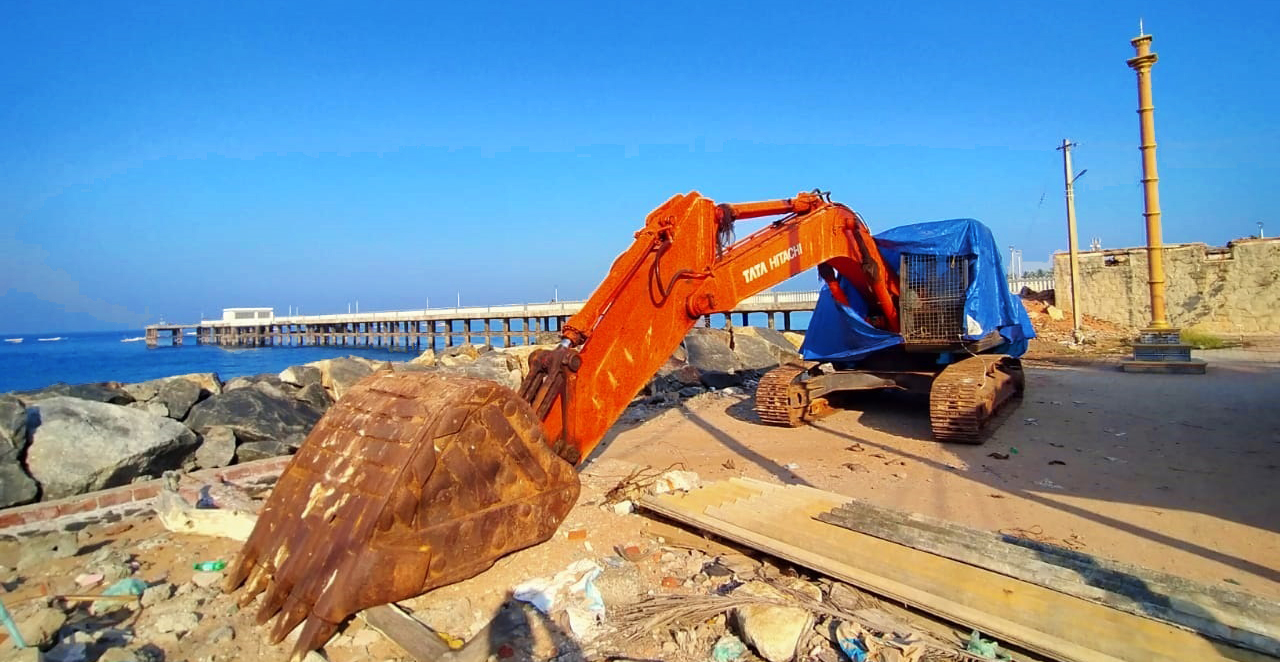 Only 900 m of Adani’s proposed 3.1-km breakwater project have been completed. Google images of the fast-paced construction of the past three months were used by ocean activist A J Vijayan for his discussions on Facebook.  He said that the destruction of part of the breakwater in the first week of March, normally a calm period, is a precursor to the immense difficulties awaiting the fishing community during the monsoon.

It is now clear that the state government will not back off from the ambitious but damaging and troubled port project. On 21 January 2021, Kerala Finance Minister Dr Thomas Isaac said in his budget speech that although natural calamities and COVID-19 had adversely affected the port construction, all components except breakwater construction and land extension had been almost completed. He said that construction works worth USD $300 million are expected in 2021-22, adding that the Vizhinjam cargo terminal had already become a major crew-change hub.

However, the government’s pride in the project sits badly with fishing and farming communities whose way of life is jeopardised by the mega-port and its ever-widening impacts.