On 4 May 2021, Ramjeevan Paswan, a dedicated defender of the rights of Indian indigenous farmers, passed away after contracting the COVID-19 virus. Ramjeevan had campaigned against the proposed Godda coal-power plant, the intended destination for coal from Adani’s Carmichael mine. A retired schoolteacher, he was about 66 years old.

Ramjeevan, whose farm was compulsorily taken over by state authorities for Adani’s power plant, had challenged the controversial acquisition in the courts. He had also lodged an official complaint against his treatment by local police during the land-acquisition process. During the course of the controversy, he gave numerous interviews to media outlets, including AdaniWatch. The death of Ramjeevan came less than two and a half years after his wife, Sumitra Devi, also passed away. The trauma of losing the family’s farm, the sole source of long-term livelihood, was a contributing factor to her death.

In February 2019, Ramjeevan and 15 other petitioners filed a case in the High Court of the Indian state of Jharkhand, asking for a stay on the Adani Group’s construction works at Godda and for the court to quash the acquisition of their lands for the power plant. The case has languished for more than two years. With the deaths of Ramjeevan and Sumitra, it is a poignant case of ‘justice delayed is justice denied’.

In February 2019, Sumitra broke down during an emotional interview with IndiaSpend about the loss of the family land. She passed away days later.

In February 2020, AdaniWatch visited some of the affected villages. Freelance journalist Abir Dasgupta and AdaniWatch reporter Geoff Law were met in Godda by Ramjeevan, who escorted us throughout the day. Noise and clouds of dust were emitted by Adani’s machinery just over a fence from the villagers’ crops. The hulking skeleton of the Godda power station was taking shape 500 metres away, on land that three years earlier had been cultivated for corn, cauliflower, lentils and mangoes. 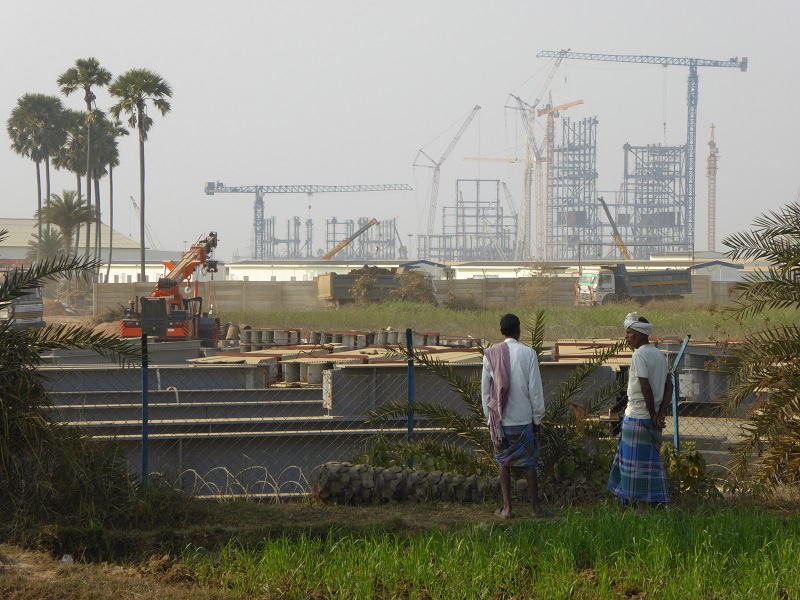 Despite the unfolding calamity over the fence, Ramjeevan and his fellow villagers conducted themselves with stoic dignity.

‘The land-acquisition processes have been marked by forgery, lies and intimidation,’ Ramjeevan told IndiaSpend in 2019. ‘There has to be some accountability for this.’

Ramjeevan had also filed a formal police complaint accusing Adani of a ‘caste atrocity’ under an Indian law meant to protect the scheduled castes and tribes, communities that are still subject to the practice of untouchability and daily violence. He objected to the roughhouse treatment to which he and others had been subjected during the process of land takeover.

‘For many months the police claimed that [the complaint] was under investigation,’ Ramjeevan told AdaniWatch. ‘In April 2019, the police claimed it had completed the investigation and sent a charge-sheet to the court – but it has still not arrived at the court! I had appealed under the Right to Information Act to find out the status of the charge-sheet and an order was issued by the State Information Commission to respond to me within a week’s time, but it has been months since then, with no response.’

Another example of ‘justice delayed is justice denied’. 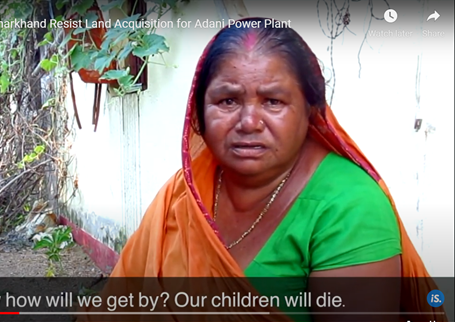 The Adani Group intends to export coal from its proposed Carmichael mine in Australia to the Godda power plant. Electricity produced would then be exported across the border to Bangladesh. It would not be used to electrify villages around the plant. Adani's Godda plant precinct has controversially been declared a 'special economic zone' in its own right, exempting the Adani Group from numerous duties and taxes it would otherwise have to pay to the Indian government.

Ramjeevan and Sumitra are survived by two daughters and two sons. AdaniWatch expresses its deep sympathy and condolences to the doubly-bereaved family members.