In January 2020, Indian news media reported that a cloud of uncertainty hung over the future of Adani’s power project at Godda. Provincial elections had just been held and a new government had been elected in the state of Jharkhand. Spokespeople for the new government were quoted saying that they would take a fresh look at the approval for Adani’s power station because of the controversial confiscation of farmers’ lands that had enabled the project to proceed.

This political development had potential ramifications for the Stop Adani campaign in Australia. The power station that Adani is building at Godda is the intended destination for coal from its mine in Queensland. The plan is to export the coal 10,000 km to Godda, burn the coal, and export the power to Bangladesh, a cumbersome financial strategy. As Tim Buckley of the Institute for Energy Economics and Financial Analysis says ‘Importing coal from Australia and then railing it 700 kilometres past the largest coal reserves in India would simply make any electricity produced at Godda too expensive. The logistics of the proposal can only work because the power-purchase agreement allows Adani Power to pass the full cost of importing the coal onto Bangladesh.’

This means that, if the Godda power station were halted, Adani’s entire business plan for its Queensland mine would collapse.

Given the high stakes involved, AdaniWatch went to Jharkhand on a fact-finding mission in February 2020. First stop was the provincial capital, Ranchi, 1200 kilometres south-east of New Delhi and still more than 300 km from Godda. Indian journalist, Abir Dasgupta, set up a series of meetings with local campaigners and lawyers, as well as an interview with Pradeep Yadav, a high-profile leader of the campaign against the government’s seizure of land from local villagers for Adani’s project.

Yadav is a member of the Jharkhand Legislative Assembly and has been a member of the State Cabinet in previous governments. His native village lies within five kilometres of Adani’s construction site at Godda. According to Yadav, there are over 50 villages within that radius of the power project, all with a population of about 1000. It’s a densely populated area because of the fertile land that enables numerous crops to be produced each year. 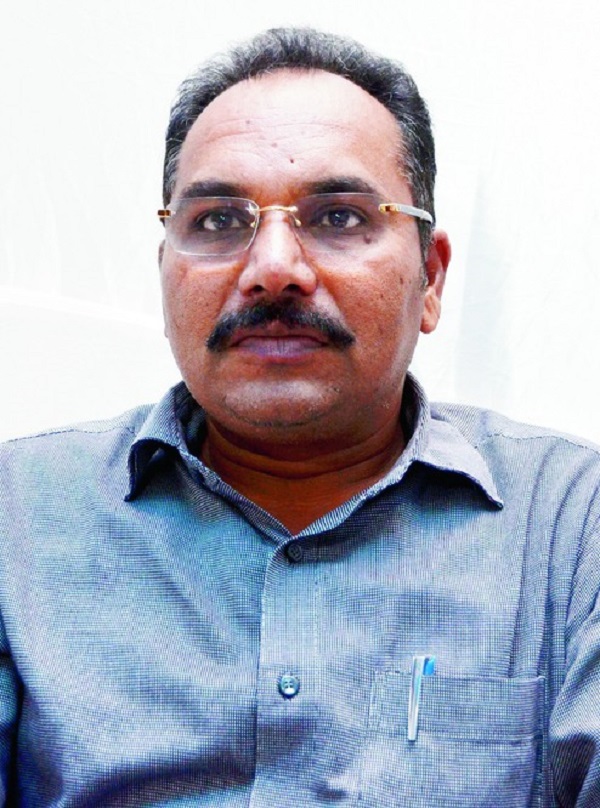 Yadav’s uncompromising opposition to the seizure of villagers’ lands did not win him friends in high places. In April 2017, he was arrested at a dharna, a sit-in, near Adani’s proposed construction site where he had been on a hunger strike for 22 days. He was charged with an assortment of offences and spent six months in prison. After his release, he continued the campaign but was hit with further allegations, including a charge of sexual harassment. Yadav maintains his innocence and says the charge was part of a conspiracy against him in the run-up to last year’s elections. At the December 2019 poll, Yadav was re-elected to the Legislative Assembly of Jharkhand.

He agrees to meet Abir and me at the government bungalow provided for him as a member of the assembly. When the message from Yadav comes through, it’s already after 8pm. We drive back and forth through the darkened streets of the government quarter, our driver frequently stopping to ask stall-holders and passers-by for directions.

Eventually, we find the house and Abir and I are shown to a dimly-lit patio where we meet Yadav. He’s a burly man with a pugnacious manner. It’s obvious that there will be no sugar-coating of the situation from him. We sit down in the chilly night air and Yadav gives us a run-down that lasts over an hour. He describes the process by which the land was seized from the villagers, the impacts on their water supplies, and the deals done regarding the use of the power. These are all issues on which he has worked for over five years. Speaking Hindi, he patiently enumerates them for what must be the thousandth time. When Abir asks him about the protections that are supposed to be provided by various independent constitutional bodies, Yadav’s reply is blunt.

‘It was their government’, he says. ‘I think they “managed” all of these bodies.’

The state government Yadav refers to was led by the BJP, the party that is also in power in New Delhi, the party of Prime Minister Narendra Modi. The closeness between Modi and Adani goes back to Modi’s time as Chief Minister in the state of Gujararat and is notorious. It seems that, even way out here in Jharkhand, the BJP is looking after Adani’s interests.

Yadav tells of the impact of his being arrested and gaoled.

‘Earlier, the struggle on the ground that was carrying on under my leadership was quite strong, and the project wasn’t moving forward’, he says. ‘Once I was arrested under a slew of false cases, the movement was weakened and the company was able to secure several gains. This happened when I was sitting on a hunger strike. When I was arrested the hunger strike had continued for 22 days. Five false cases were filed against me, and after I – the leader of the movement – was imprisoned it had a chilling effect on everyone else. Then the company was able to manage everything. It was “their” government – a BJP government – here in Jharkhand as well as at the centre (New Delhi).’

Yadav tells how the villagers’ lands were acquired by the Jharkhand Government on behalf of the Adani Power (Jharkhand) company using a contentious piece of legislation, the Land Acquisition Act 2013. The question of appropriate financial compensation was a vexed one. A government official had the responsibility to determine the value of the land and provide compensation set at four times that value.

According to Yadav, the government understated the value of the land by a factor of about 12, resulting in a massive windfall for Adani and a corresponding loss to the villagers. When Yadav raised this issue in the Legislative Assembly, the government formed a committee and raised the land valuation by a factor of about four, resulting in a corresponding increase in compensation. Nevertheless, affected villagers were still receiving only about one third of the funds they were entitled to after losing their land.

The consent of the landowners was another hurdle for Adani. Under the Act, it was necessary to secure the consent of 80% of the landowners. In the early stages of the acquisition process, around 2015 and 2016, Adani and the government were finding it impossible to reach this target within the 12 villages where acquisition was being pursued. After Yadav and his comrades raised the issue, eight of the 12 villages were dropped from Adani’s immediate plans.

Another major irregularity in the government’s treatment of Adani’s project related to the provision of power from the completed plant. Under Jharkhand’s energy policy, the state was entitled to 25% of the power. The previous government, however, approved Adani’s plans to export all of it to Bangladesh, accepting Adani’s offer to provide the state’s entitlement from other power plants. The government also allowed Adani to wriggle its way out of an obligation to provide around half of the power at a pre-set fixed rate, instead accepting a variable rate that would benefit the company at the expense of electricity consumers.

A huge threat to the viability of the farming communities surrounding the power station is the loss of domestic water supplies. Adani plans to draw water from the Ganges River, some 90 km away, and pump it to the project site. But as the pipeline has yet to be laid, the company has been relying on groundwater. It has bored wells within the land it has acquired but has also induced surrounding farmers to dig a further 400 bores and sell Adani the water. This is depleting the groundwater of the entire region to a damaging degree, an action that Yadav says is illegal and unauthorised.

Yet another environmental issue relates to the contracting for the project works, Yadav says. In particular, sand that is required for the construction works is procured on the black market, and the Godda area now has a large illegal sand-mining mafia that destroys the land with impunity.

Abir asks him about the court case that has been mounted against the land acquisition by some of the affected villagers. Yadav expresses scepticism. The Jharkhand High Court has been sitting on the case for some time, he says. Many of the villagers have dropped out. But he names a group of villagers whom we will be meeting in a couple of days. They have remained strong.

Yadav outlines the fundamental argument being made in the courts against Adani. Under the relevant Act, the government can acquire people’s land only when it is for a ‘public purpose’. But in the case of the Godda power station, the electricity to be generated will not be for the benefit of the people of Jharkhand – it is for export to Bangladesh in order to generate profits for the Adani Group. So there is no public purpose. In addition, petitioners to the court argue that the previous Jharkhand Government had effectively robbed them of their rightful compensation. The land acquired was fertile and irrigated, allowing multiple crops each year. Yet the government claimed that much of the land was non-irrigated and single-cropped, enabling it to reduce the level of compensation accordingly. 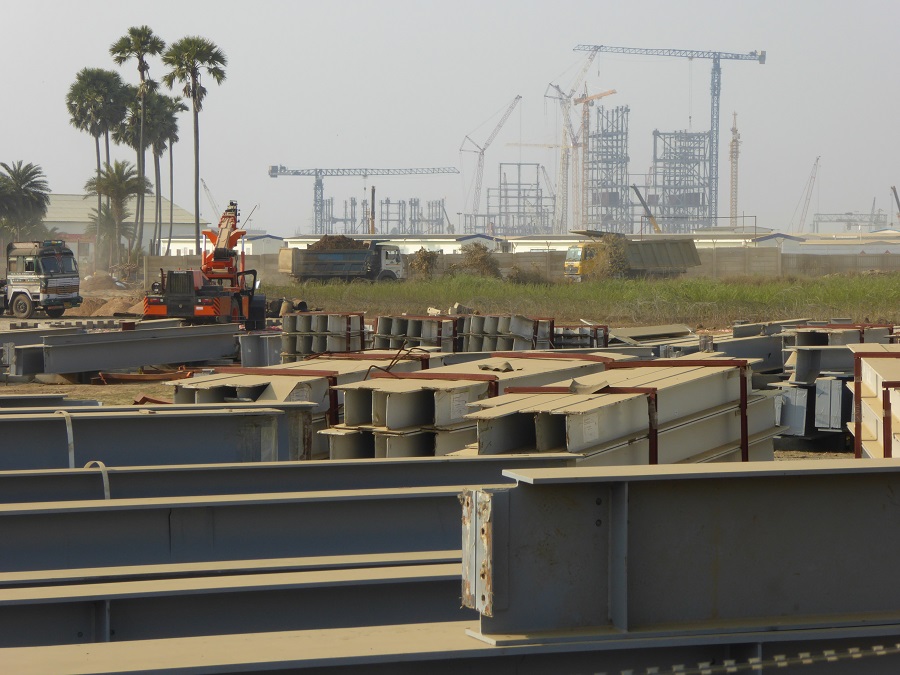 ‘What we can expect, if the project is stopped by the courts,’ Yadav explains, ‘is that at least the environmental damage to the region can be mitigated. People in a radius of 10 kilometres around the plant will be saved, as will the ecosystem. The water table will be saved. Otherwise, the whole area will be destroyed and everyone will leave.’

But for the time being, he says, construction is well underway, with up to 40% of the project completed.

Abir asks about the political ramifications of Adani’s project and the attitude of the government that replaced the BJP-led administration at the end of 2019. This new government is a coalition between the Congress Party and the Jharkhand Mukti Morcha (which translates to Jharkhand Liberation Front). They had expressed opposition to the land acquisition at Godda during the election campaign. Again, Yadav is blunt.

‘Now it is no longer an issue in the state’s politics’, he says. ‘All the political parties were already compromised even at the peak of the movement. I think even the present sitting government is also with the company at some level. I do not have very high hopes of it.’

It becomes very clear that hopes for stopping Adani’s massive coal-fired power station at Godda rest with a small number of determined villagers, their lawyers, and Adani’s fragile financial situation – as well as the national and international pressure that can be brought to bear.