Adani’s coal mine in North Kalimantan devastates the local environment

The corporations owned or controlled by the Adani Group are best known for their massive operations in India and their divisive proposal to mine coal in Queensland. Less well known is Adani’s coal-mining operation on a small island off the coast of Borneo in Indonesia, yet Adani’s record here could be an indicator of what’s in store for those living in the vicinity of the company’s proposed Carmichael mine.

Indonesia is one of the world’s biggest coal producers, with huge amounts burnt in local power stations or exported. Adani is one of those exporters, with a large coal mine on the small island of Bunyu in the province of North Kalimantan. 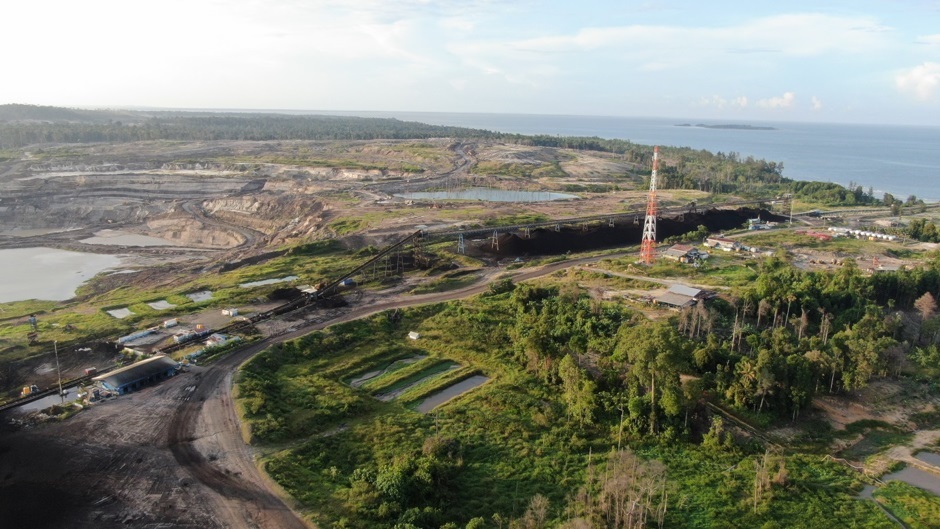 In early 2019, an Indonesian non-government organisation called JATAM published a report describing the impacts of mining on small islands along the 5000-km archipelago of Indonesia. Bunyu was a case study. The island lies just off the north-east coast of Borneo. There are two major coal mines on Bunyu, one of them run by a wholly-owned subsidiary of Adani. The report describes the impacts of coal mining on the environment, the local industries and the people who live near the mine and its port. It paints a picture of water supplies polluted, fisheries degraded, rice paddies destroyed and traditional crops drastically reduced.

Bunyu is an island of 198 square kilometres in a river large delta and has a population of 11,000 people. The island is home to people known as Tidung, whose traditional lifestyle included growing rice, harvesting and processing salak (a type of fruit), and fishing in the coastal waters. Several villages of Tidung people were established over the course of about six generations. Over time, they mixed with settlers from other parts of Indonesia. Mining is big on Bunyu – as well as the Adani operation, there is another coal-mining company and exploitation of oil and gas by the country’s state-owned corporation. However, other interests in Bunyu’s community have attempted to push the island’s attractions as a tourism destination. 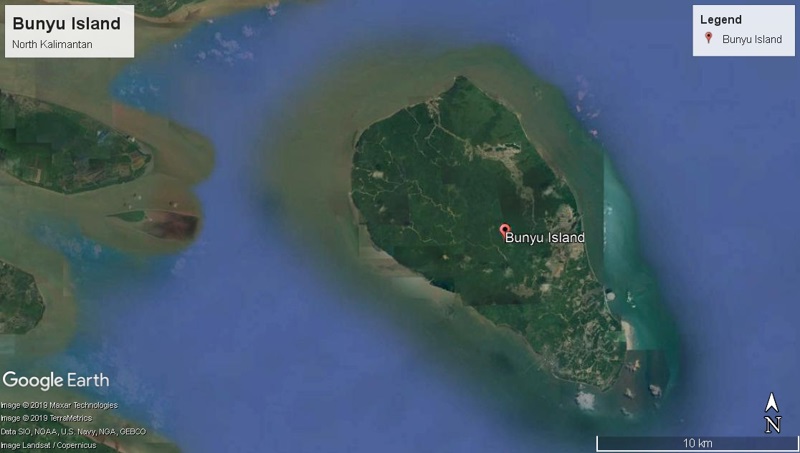 Exploitation of oil and gas on Bunyu has been occurring for over 50 years. The advent of coal mining has been much more recent, with the first mining operations commencing in the late 1990s. In the early 2000s, Adani arrived, establishing at least two subsidiaries, PT Lamindo Intra Multikon and PT Niaga Mulya.

Between them, Adani’s subsidiaries have concessions on Bunyu totalling about 2600 ha (about 14% of the island). According to a company promotional video, Adani’s coal mine was established on Bunyu in 2006 and the first exports to India occurred in 2008. Adani’s website says that its subsidiary, Lamindo, exported four million tonnes of coal to India in 2017-18, with a target of 5.5 million tonnes for the following year. The promotional video says that Adani has averaged 5 million tonnes per annum of export since 2009. This makes Adani’s operation the biggest on Bunyu. 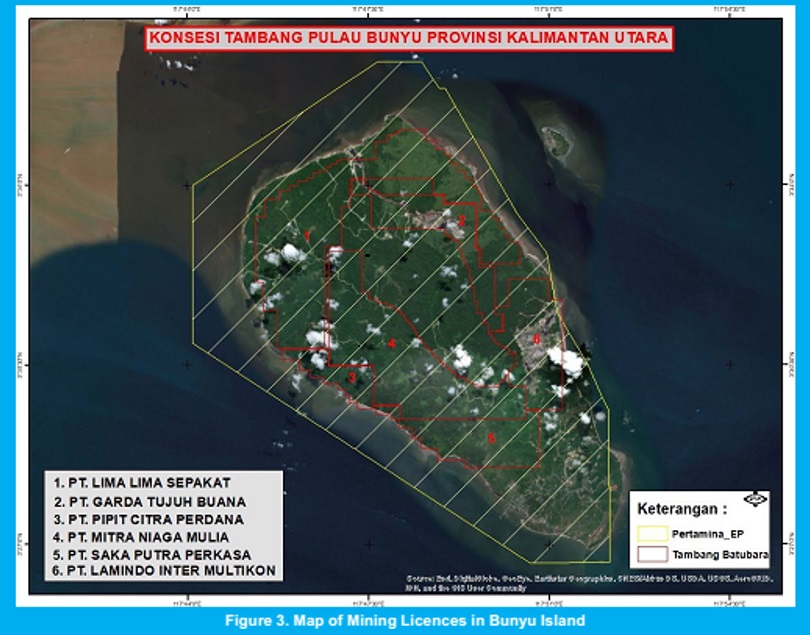 According to those quoted in JATAM’s report, land was acquired by coal-mining companies at prices the villagers regarded as too low – about $2500 per hectare. In addition, the coal-mining companies acquired control over publicly-owned forested land, including areas designated as ‘protection forest’. According to the Indonesian environmental group WALHI, access to formally protected forest had been wrongfully granted to mining companies in what has amounted to the acquisition of these lands by the companies concerned. Large tracts of these lands – comprising up to 50% of the island’s forests, according to one source – have subsequently been cleared for operations associated with coal mining. WALHI has warned in various media statements since 2007 of encroachment into the forests by the mining companies, including those run by Adani, and the inevitable ecological damage that would follow.

According to locals interviewed by JATAM, rice fields on Bunyu have been largely replaced by settlements over the past 15 years. Over 1200 tonnes of rice were produced annually on Bunyu in the early 2000s but by 2015 that had dropped to less than 90 tonnes. Production of salak fruit and secondary products has suffered a similar reduction. Prior to the advent of coal-mining, the village Gunung Daeng produced salak in quantities of up to three tonnes in a year, sufficient to export dried salak chips to other islands. Today, the average yield is only 30-40 kg per harvest. According to the JATAM report, expansion of the Lamindo (Adani) mine into agricultural areas has been at least partially responsible for this decline.

The island’s once productive fishing industry has also been adversely affected by operations associated with coal exports. Adani’s website says that barges move coal from the jetty to ‘mother vessels’. According to local fisherfolk interviewed by JATAM, coral reefs have been damaged by ship anchors and by impacts from coal barges during docking operations. Coal spilled into the sea during loading has polluted some of the waters. Fish catches have declined; one fisherman says that his daily catch has plummetted from 30-40 kg to just 7 kg.

Locals also say that their seaweed-harvesting and processing operations have been severely impacted since major coal-export operations commenced. Recent seaweed harvests have failed; the women who used to rely on processing of locally-obtained seaweed for their livelihoods have had to import seaweed from another island at extremely high prices. 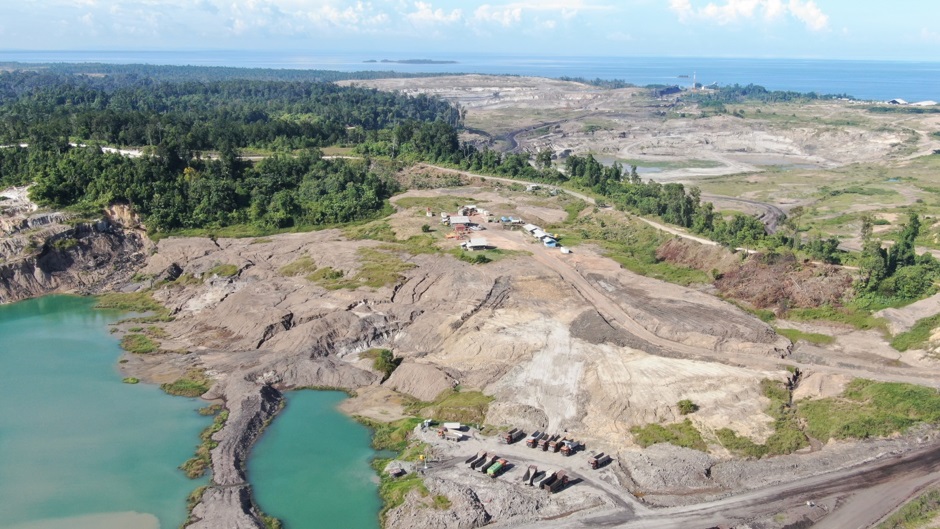 It is the villagers’ water supplies that have suffered the biggest impacts from coal-mining operations. Coal has been extracted, transported and processed in important water catchments, polluting creeks, rivers and groundwater. Environmental organisations warned that coal-mining operations, including by an Adani subsidiary, were encroaching into protected forests in 2010, but the operations proceeded, degrading water quality in streams that had previously been reliably clean. As a result, three rivers, one of which used to provide a reliable back-up supply during dry times, became polluted. Rainwater collected from people’s roofs has also been contaminated by coal dust blowing from adjacent pits and coal piles. At least one villager believes that the worst case of this is in the village of Gunung Daeng, where the mine is now only 100 metres from some of the dwellings. People have complained that small reservoirs constructed by the local water authority and by the oil-and-gas company are also periodically polluted by coal dust. Many locals now buy bottled water, while those who can’t afford the expense have to make do with degraded or unreliable supplies of water.

Adani, on the other hand, said in an earlier report that had taken steps ‘to ensure the availability of potable water for all’, including provision of water tanks and delivery of water to households. A water-treatment plant established by Adani provides reliable water to 1250 to 1500 households in the vicinity of its Lamindo mining and export operation. However, most of the islanders do not have access to this water supply. Adani also says that it is committed to maintaining the ‘flora and fauna of the project-affected areas’ and planted 5300 saplings in 2017.

Adani says it helps the community

The company with the biggest coal mine on Bunyu is Adani. It says that it provides over 1500 direct and indirect jobs on Bunyu, and that it helps the local community through provision of medical services (including ambulance speed-boat services, eye checks and medical kits), school facilities (library resources, transport and furniture), teacher training, scholarships, water supplies, various community infrastructure projects and other services. Its environmental management on Bunyu has received a certificate from the government’s Ministry of Environment.

Bunyu to become a ‘dead island’?

Nevertheless, JATAM says that the recent advent of coal mining on the small island of Bunyu has had severe impacts on the environment and the traditional way of life of local villagers. Supplies of food such as rice, fruit and vegetables that were once locally obtained in abundant quantities have undergone a serious decline. Forests in important water catchments have been cleared or degraded. Local water supplies from streams, reservoirs, boreholes and roof-fed tanks have become polluted. Many people have had to resort to purchasing bottled water. Fish catches have declined significantly. And local industries, such as processing seafood and salak fruit have suffered. Environment group WALHI has even gone so far as to warn that Bunyu could become a ‘dead island’ if coal mining continues its relentless expansion.

(The main source for this story is a report by JATAM, an Indonesian NGO that is an advocate for communities adversely affected by coal mining. Its March 2019 report Small Islands of Indonesia, the Land of Mines – Report on the Destruction of the Entire Bodies of Small Islands of Indonesia by Minerals and Coal Mines. Unless explicitly stated otherwise, the word ‘Adani’ refers to a corporation or a group of corporations, not to an individual. AdaniWatch contacted the Adani Group for comment on this story but no reply was received)