Adani's massive port development in south-western India has triggered protests by fishing communities whose livelihoods are being destroyed by dredging and erosion. In January they took to the streets and to the ocean to vent their outrage at Adani locally and their solidarity with protesting farmers nationally. Adani is widely seen as one of the beneficiaries of the Modi government's new farm laws that have angered tens of millions across the sub-continent.

Fishing communities in India’s south-western state of Kerala have intensified their protests against the Adani Group.  In January 2021, they organized rallies in the sea and on land to Adani’s Vizhinjam Port shouting slogans condemning the massive impacts of Adani's expanding operations.

This inspiring video shows the passion of the people and the response of the police.

Police prevented protesters on small boats joining the sea rally held on 16 January 2021. Fisher folk took out a tractor rally to the port site on 26 January. Police were deployed to prevent this rally too. They set up barricades four km ahead of the port site to stop the protestors. But the protesters did not disperse and continued sloganeering sitting on the road. The organisers said this action is aimed at expressing solidarity with the tractor rally held on the same day by farmers protesting in Delhi and also to signify their opposition against Adani. They highlight the environmental destruction and resulting loss of livelihoods caused by the Vizhinjam port project.

In the next phase, the Kerala Swathanthra Malsya Thozhilali Federation will launch a protest in the sea with a thousand boats, said Anto, an office-bearer of the Federation in the state capital of Thiruvananthapuram during the meeting after the tractor rally. 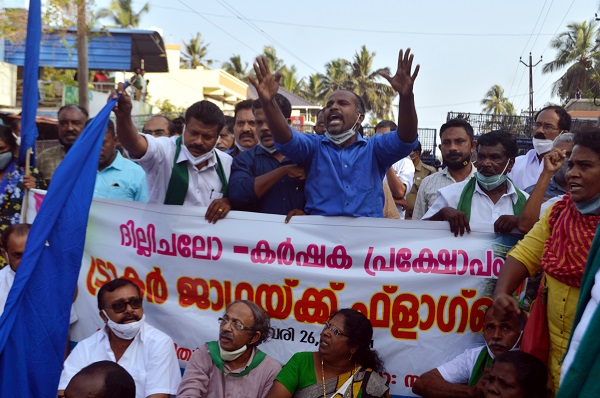 The Kerala state committee of Rashtriya Kisan Mahasangh, an umbrella organisation comprising 182 independent farmers’ unions across the state, had started a tractor parade from the northern end of the state on 16 January. The rally inaugurated by K V Biju, one of the prominent leaders of the farmers’ protest in Delhi, completed its journey through 14 districts in Kerala and arrived in Thiruvananthapuram on 26 January. Following this, protesters proceeded to Vizhinjam Port starting from the Secretariat. This rally and the fishing community rally joined forces at the Kovalam Bypass. Members of Socialist Unity Centre of India (Communist) also took part in the rally.

On 16 January, state police stopped the protesters during the second phase of the agitation at Kovalam Grove Beach. So, they continued their protest by raising slogans at the beach and in the sea. This novel protest was also held in solidarity with the farmers’ agitation in New Delhi against the controversial farm laws (which deregulate agriculture throughout India) of the central government.

In the first phase of the protest, members of the Swathanthra Malsyathozhilali Federation (Independent Fishing Labourers Federation) and women fishing workers sailed from Vizhinjam Harbour to Kovala Grove Beach, four kilometres away. Police and Coast Guard accompanied them on boats. 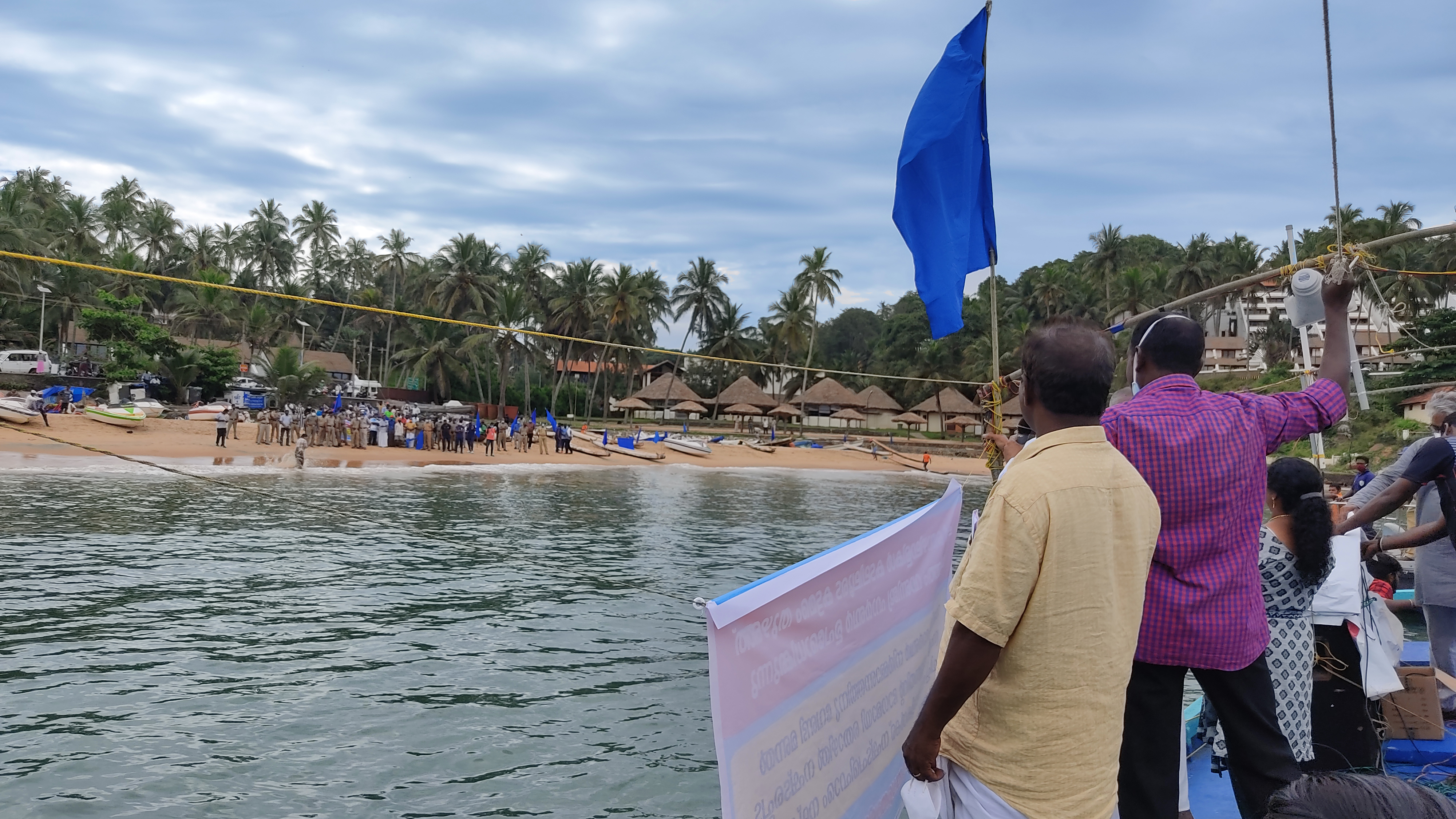 At Kovalam Grove beach, mussel collectors were ready to enter the sea on kattamaram (small boats made by tying two logs of wood together). Their plan was to accompany the protestors to the Vizhinjam port site. But police had already deployed forces at Grove Beach.

The protesters warned authorities not to test their strength, adding that this was just the beginning and if the government continues to ignore their demands, they will resort stronger modes of protest. When police denied permission to let the fisher folk on beach to go into the sea, a woman protester in a boat tried to jump into the water. This accelerated the conflict. Then it was decided to continue the agitation from the sea and the shore. It went on for hours.

The fishing community has raised serious allegations against Adani. Spokespeople said that when the government chose to protect Adani, the fishing community was plunged into poverty. They shouted slogans such as ‘down with Adani rule’, ‘down with monopoly rule’, ‘is this justice? Is this ethical’, and ‘down down global capitalism’.

Earlier, fishing labourers had disrupted construction activities at the port for over a month, from 30 September 2020. They stopped the protests after several meetings with the state government. But they have warned of stronger protests if the government fails to implement the promises made.