WEEK OF ACTION: Young people in India and Australia have launched a Global Week of Action to Stop Adani! They are determined to protect their future from climate change and to stand in solidarity with community resistance to Adani’s projects around the world.

'The Stop Adani campaign stands in solidarity with Indian communities, including Adivasi communities, resisting Adani’s coal projects, and we stand with Indian farmers saying no to Modi’s farm law changes which benefit Adani. The Adani Group disregards Traditional Owners and the community, and it brings environmental destruction,' a StopAdani spokesperson said.

'We also recognise the privilege of campaigning for change without fear for personal safety, and send our best wishes to those who campaign for justice and take on personal risk to do so.'

Links to actions in India can be found here: Global Week of Action to Stop Adani: Toolkit (coda.io)

To see people in action all across India, look at this inspiring video:

And for songs of protest, here are 53 tracks to access, from Hashtag Justice, to Word Sound Power, and Chennai Poromboke Paadal: 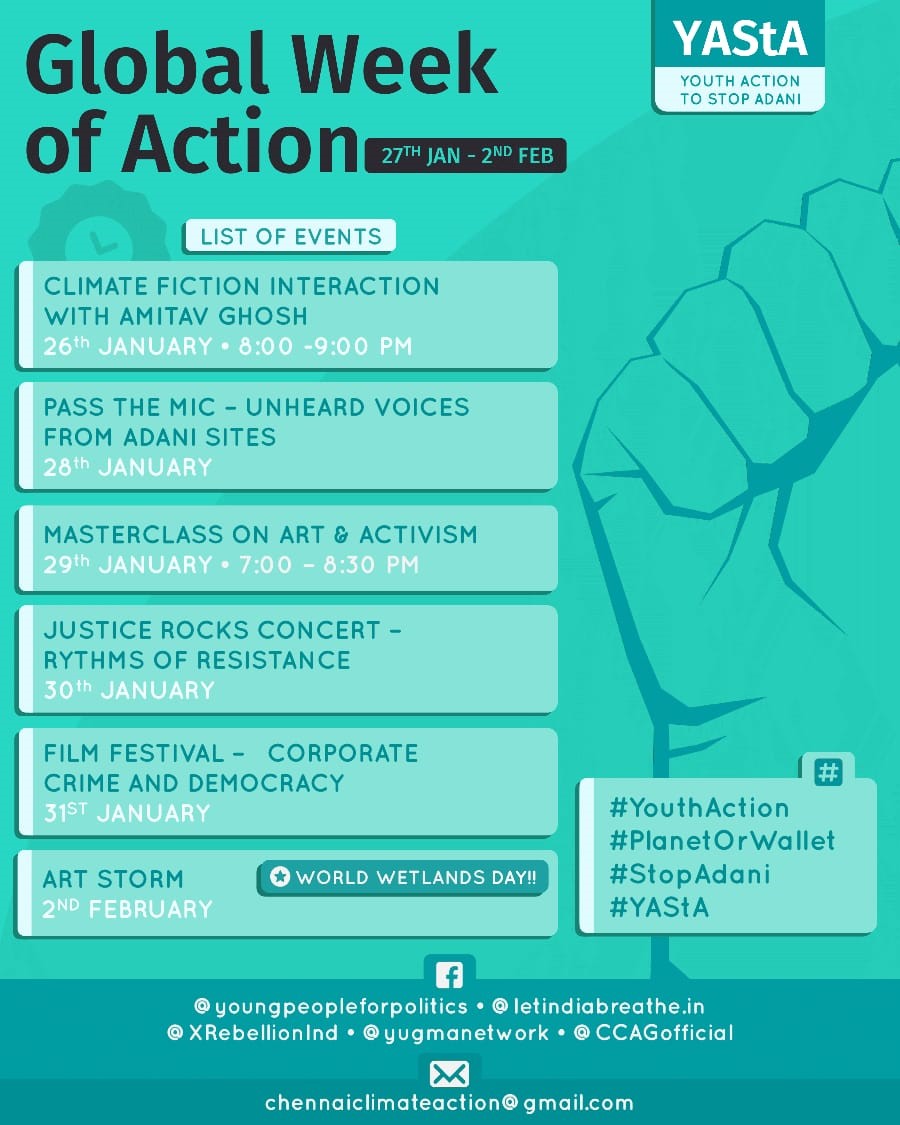 Even as opposition to Adani’s megaport proposal in Kattupalli is building up, more than 25 youth groups, including from Tamil Nadu, have launched a global call for a week of action targeting Adani.
YAStA is a call to action by youth groups from around the world to Stop Adani from subverting democracies, suppressing community voices, harassing its critics, taking over lands belonging and used by aboriginal, indigenous, farming and fishing communities, degrading the environment, aggravating the climate crisis, endangering our future, eroding livelihoods and obliterating cultures and identities. Inspired by global efforts to #StopAdani, YAStA is calling for a Global Week of Action to Stop Adani from 27th January 2021 to 2nd February 2021 (World Wetlands Day).
The farmers' protest outside Delhi highlights the depths to which corporate control the Indian government. Adani, which added $19 billion to its wealth during the COVID lockdown, is considered one of the big beneficiaries of the Farm Laws. In every location where local communities are fighting Adani's business ventures, the campaign is also to reclaim their own governments to work for the electorate rather than for Adani.
Adani's businesses and proposals have dangerous ramifications for the environment.  By taking over farmlands, commons, wetlands, seascapes and lands sacred to aboriginal and indigenous communities for mega ports, coal mines and carbon-intensive industries, Adani’s proposals end up impoverishing communities and aggravating the climate crisis. Adani's response to community campaigns has also been vicious. By branding dissenting communities as anti-development and anti-national, it goads democratically elected governments to turn against their own citizens. It must be said that Adani is not the only corporation to behave in this manner. However, as the experience of communities from India and Australia suggests, Adani symbolises the dangers of untrammeled corporate power.
As youth from across the world, we are very concerned for our future. We are convinced that a world under corporations will only enrich shareholders by robbing the environment, communities and generations to come. We extend our solidarity to the farmers protesting outside Delhi for fair prices for their produce and for more control over their own destinies. We also stand shoulder to shoulder with the communities challenging corporate power, particularly in places like:
The Global Week of Action will feature actions highlighting the problems caused by Adani’s business plans. We invite you to be part of the global movement to reclaim democracy, expose crony capitalism and challenge corporate power.
Youth groups in solidarity with Youth Action to Stop Adani:
1. Chennai Climate Action Group
2. Dynamic Action Group Kerala
3. Extinction Rebellion India
4. Fridays For Future India
5. Goyant Kollso Naka
6. LetIndiaBreathe
7. Muse Foundation
8. National Alliance for People’s Movement Keralam
9. Poovulagin Nanbargal Youth
10. Vibgyor Film Collective
11. Young People for Politics
12. Yugma Network
13. Adivasi Lives Matter
14. Campus front of india (Tamilnadu)
15. Dulkal Library
16. Green EIA movement
17. Life on Land
18. Lokayat
19. Makkal Pathai
20. SAPACC Youth
21. School Strike for Climate (Australia)
22. Sirar Kalam
23. Youth for Climate India
24. Youth4Swaraj
25. Yuva Safar - Jan Awaaz
26. Zenith Tuition Centre
27. Peace, Rights & Environment Society of GAIMS (PRESOG)
28. National Alliance for People's Movement (Tamilnadu)
29. Chennai Youngsters
30. Youth Advocates for Climate Action Philippines (YACAP)
31. Millennials for Environment
👉CONTACT US:
Email - [email protected]