In June last year, farmers reoccupied the site of Adani’s troubled Pench power project and planted crops. The bold move arose from their desperation at having been deprived of a living for over 10 years. In July, Adani and the local authorities responded by sending in the bulldozers. A melee resulted in a retreat by Adani. Although some crops had been destroyed, the farmers were allowed to complete the harvest cycle. But this was only a temporary truce in a conflict between traditional farmers and intruding coal development that has gone on for over 30 years.

Early in the morning of 23 July 2021, farmers gathered at the project site of Adani’s proposed Pench thermal power project in Chhindwara. In the weeks previously, they had reoccupied over 200 ha of the land and planted corn, wheat and pulses. Now word had got around that Adani intended to bulldoze the area. Watch this video to see the bulldozers destroying the crops:

The atmosphere was tense. People were rushing in. With the connivance of the local administration and police, the Adani company, Pench Thermal Energy (MP) Ltd, brought in ten earth-moving machines and started to destroy the standing crops. A ruckus ensued. 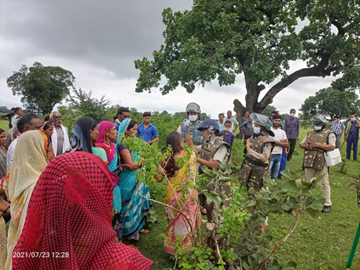 After almost two hours of heated argument, the company officials backed off. They accepted that the farmers would complete the current crop cycle that was to be harvested in October. In exchange, the company, in the presence of government officials, asked the farmers to give an assurance that they would vacate the land once the harvest was done.

Meanwhile, 10 hectares of valuable crops had been destroyed.

AdaniWatch met some of the farmers on the same day. Almost everyone had the same story to tell. They had cultivated the land until it was sold by the government to an Adani Group company about 10 years ago. The company built a wall to lock out the farmers. The farmers lost their livelihoods and their food supply. At first, they believed that the power plant would be constructed within five years and that their family members would be employed there. But there had been no progress for eleven years. By 2021, in the wake of an economic slowdown and the effects of the pandemic, their situation became desperate. That’s when they decided to take back their land.

Four women from Chausara village spoke to AdaniWatch. Sant Kumari Kavreti, a member of the Gond Adivasi tribe, told us that her family has 62 acres of land. The family of Naina Chandravanshi owns 26 acres while those of Pragati and Mamata Yadav have 10 acres each. All their lands are within the project site. 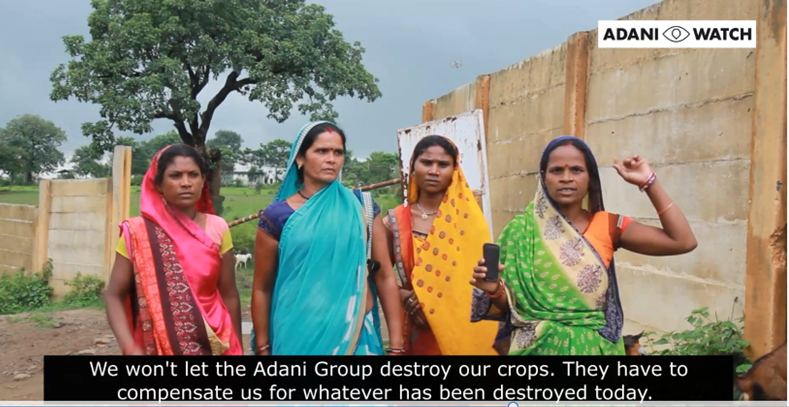 They said they had been doing menial jobs. When those jobs dried up following the economic downturn and the pandemic, it became difficult for them to take care of their families. Many were on the verge of starvation. Along with other villagers, they decided to take possession of their land and start cultivation. All four families had borrowed tens of thousands of rupees from the local money-lenders to buy seeds, fertiliser, pesticides and so on. The interest rates varied from 3% to 5% per month, a rate that reflected the risky position of people who do not have title to the land they work. With part of the crop destroyed, they worried about how to pay back the loans.

They said that the destruction of the crops was inhuman. According to most of the farmers to whom we spoke, there was no warning that the crops would be destroyed. Children who were playing in the vicinity saw the earth-moving machinery arrive with a large police force at the project site and alerted the adults. Sensing trouble, farmers joined together and rushed to the land. They said their fight is against the government, not the Adani Group.

Kavreti said it in clear terms: ‘We have nothing to do with Adani. Our fight is with the government. It was our land and still is. The government cheated us and sold it to the company for profit. Why should we struggle? We don’t care whether it is Adani or someone else. These pressure tactics will not work. We won’t let them steal our land just like that.’

The others agreed with Kavreti. They said that, instead of stopping the company from destroying people’s livelihoods, the police and the local government administration were trying to stop the farmers from accessing their lands. The Adani Group had already filed court cases against the farmers for taking possession of the land, they said, so why did the company and the local administration not wait until the court verdict before starting to destroy the crops?

The women said the company officials insulted their children by saying that they were not qualified to be employed by the Adani Group. They were angry at being lectured about education when they don’t even have proper housing or enough money to feed their children. For these people, the daily priority is simply to survive. 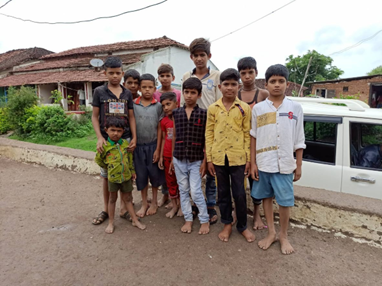 According to the dispossessed farmers, the government’s employment-guarantee scheme for the poor, which ensures 100 days of employment at a fixed minimum wage, is not operational in their villages. They say the situation is so bad that people from other areas are not willing to marry people here because they fear their children will suffer from a lack of basic amenities and a proper livelihood. They asked: ‘Is there no law to protect the interests of the poor in this country? Why do the government and the law-enforcement agencies always stand by the side of rich and affluent?’

We spoke to a group of marginal farmers, each of whom owns less than five acres of land. Every one of them had the same thing to say – they are facing extreme poverty and have no means to survive other than cultivating the lands confiscated from them. They are not ready to vacate their land, come what may, because they have already waited too long, trusting the government and the Adani Group.

By the afternoon of that day, all the residents of the six affected villages were at the project site, protesting against the local administration for supporting the company in destroying their crops. Their persistence succeeded and the administration asked the company to send the machines back out. In the talks that followed, the company allowed the farmers to complete the crop cycle on the assurance that the farmers won’t stake any claim to the land after the harvest.

Three months later, towards the end of October 2021, this reporter spoke to many farmers from the affected villages over the phone. They were happy with their harvest and had started tilling the land for the next crop season.

In November 2021, the same set of people told us their crops were growing well and that the company had not created trouble after July. Meanwhile, the farmers had filed a suit in the Jabalpur High Court, questioning the government’s right to sell land that was acquired for a government project to a private company. The case is yet to be listed for hearing.

With important inputs from Ankit A.

This story continues in part 3.